Fifth Avenue South is known for its energetic nightlife, unique boutiques, and of course, the diverse selection of restaurants. For top-notch seafood, Yabba Island Grill has long been the go-to. This local hot spot is ideal for cocktails, date nights and group gatherings. And now, Yabba also offers live music and comedy shows.

Before its official grand opening 22 years ago, owner Skip Quillen knew this fine-but-fun dining concept would fit in perfectly with the fast-paced atmosphere of South Naples.

“When it was first opened at the center of Fifth Avenue South, it was still searching for its own identity and ‘sea legs’ sort of speaking. But at the time, Fifth Avenue South was young and on the move, and Yabba in many ways reflected that youth and spirit,” says Quillen.

Offering a breezy island vibe, Yabba continues to thrive as it offers something for everyone. From fresh seafood to a large wine selection, this location is the place for those wanting a tropical escape for their evening meal. Even sitting inside feels as though you are right next to the beach with the open-air bar and open dining room facing Fifth Avenue providing continuous airflow throughout the restaurant. While the vibe is casual, the cuisine is sophisticated.

“Yabba, which means ‘everything is cool’ in island slang, is a restaurant that was created to have the best in fresh seafood — to have the laid-back style that reflected Naples in those early days — but at the same time, we wanted the restaurant to have an upbeat and creative feel, and also affordable,” says Quillen. “All those things are as true today as they were back then.”

If you find yourself looking for the perfect starter, might we suggest the Seafood Tower for Two – but order it for the entire table! This large selection, served on ice, includes eight jumbo shrimp, four oysters, two snow crab clusters, eight mussels and a whole Maine lobster served with homemade cocktail sauce and Yuzu mustard sauce — something to satisfy each person at the table.

This appetizer pairs nicely with the restaurant’s iconic cocktail, the Yabba Rita. Take your tastebuds on an island getaway with this sweet but strong beverage. If you prefer wine, Yabba provides a 50–percent–off wine list if you join their world-famous “Retails plus $1” wine list!

From the bar to the kitchen, the staff pay attention to every detail to ensure each dish and drink does more than satisfy their customers – it captivates.

“It’s fine dining, but you can be yourself here,” says General Manager Coral Attree.

Chef Chris Metzler has been with Yabba’s parent company, Culinary Concepts, for over 25 years and is dedicated to cooking each dish to match the overall vision of the company: to create incredible memories one bite at a time.

Before joining Quillen’s team, he graduated from the Culinary Institute of America and then interned with Bayside Seafood Co. Since then, his clever use of flavors and creative plating has brought customers back, craving more. He procures the freshest local seafood, having developed longstanding relationships with area fishermen, Attree said.

“If you haven’t been to Yabba, or if you’ve only been to Yabba in those early crazy years, maybe it’s time you come back and see how far we’ve grown,” invites Quillen. “I’m so confident you’ll think Yabba is one of the best seafood restaurants you’ve been to, I’ll be glad to buy your dinner if you think I’m wrong…but I’m betting I won’t be!” 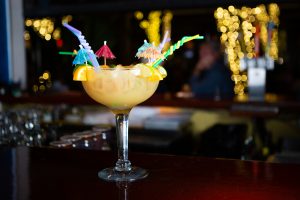 Yabba Rita: It’s billed as “the best margarita you’ll ever have!” Combined with José Cuervo Especiál, Bacardi Citrus Rum, fresh citrus, agave and a Grand Marnier Floater, this drink sets the tone for the island experience — this is the cocktail for anyone who wants to sit back and sip slow. 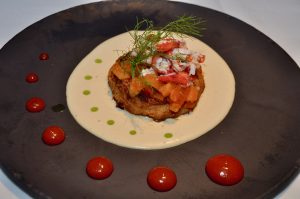 Crab Cake: This salty homemade Blue Crab cake with citrus mustard sauce, red pepper and aioli sauce is so good you won’t want to share this starter! And it’s so meaty that you could just make it your meal. 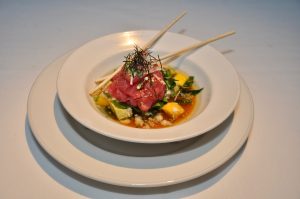 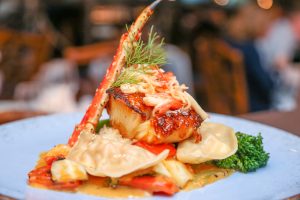 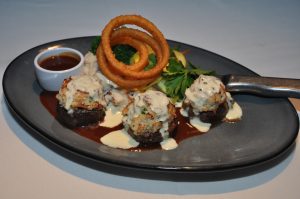 Sweet and Spicy Steak: Three beef tenderloin medallions are topped with a popcorn shrimp and lobster bake, severed with sweet–and–spicy sauce and “lo–cal” béarnaise. A side of mashed potatoes and onion rings as garnish finish this delightful dish that perfectly balances sweet and spicy with savory. 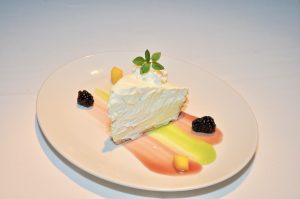 Key Lime Pie: One of the best key lime pies around! At first bite, the house–made key lime mousse will melt in your mouth and will be followed with a crunchy graham cracker crust. As a bonus, the real whipped cream incorporates fresh key lime zest. If key lime isn’t your thing, try the decadent coconut cream pie!