Recent headlines of red tide, blue-green algae and flesh-eating bacteria can make our home seem less and less like the “paradise” we signed up for. As the population of Southwest Florida continues to increase, finding solutions to these water issues is vital. Thankfully, community leaders are t  aking initiative. The Village of Estero recently signed a 12-month contract with Florida Gulf Coast University’s new research center, The Water School, for monitoring water quality of the Estero River. 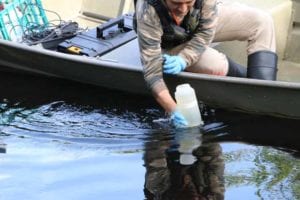 Don Duke, professor of environmental studies, is one of three FGCU faculty members supervising the Estero River Project. He reassures Estero residents that “bacteria are everywhere in this world,” and there’s no immediate cause for alarm.

“Please don’t let the use of the word ‘bacteria’ scare you,” says Duke. “It’s a loaded statement to say whether the bacteria in the river are good or bad. The Estero River isn’t terrible, by any means, but we want to find out whether there is cause for concern and where exactly the bacteria are coming from. The Village can then know whether they can remove some of those sources.”

The Water School officially launched its canoes onto the Estero River from Koreshan State Park on Aug. 19, 2019. Members of the research team will continue to go out once a month and test various locations along the river for the next 12 months. 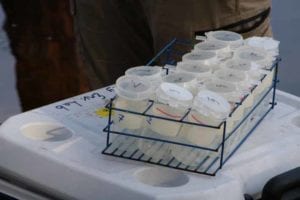 “We want to do one year of testing, through the rainy and dry seasons, to ensure we get the most accurate testing,” explains Serge Thomas, another FGCU Environmental Science faculty member supervising this project.

The Estero River Project will be mostly student run. Students are the key researchers; they will be supervised by Duke, Thomas and the third faculty member, Hidetoshi Urakawa, professor of marine sciences.

“Bit unusual for such a modest-sized project to have three faculty leading it,” says Duke, “but we all had interest, so we decided to share the opportunity.”

The breakdown of the project looks like this: students launch their canoes at the Koreshan State Park kayak launch and collect samples of water from various locations along the river. On top of water samples, they also document things like water temperature, location and time of the year. 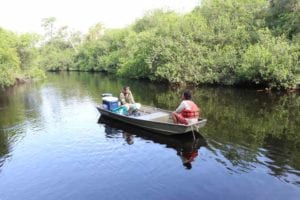 “We are trying to see how many microbes are in this water because there is a lot of recreation that happens here, and the locals are worried it may not be healthy to be in,” says Ian Lisle, a senior FGCU student involved in the project.

The water samples are sent to a lab on FGCU’s campus where they are further analyzed. Dr. Urakawa oversees this part of the process.

“At FGCU, we are now able to do something called gene sequencing,” explains Duke. “We use this to identify the exact organism from which the bacteria originate, so we can see if it’s seagull excrement that is natural and has been here for thousands of years, or if it’s of human origin, which the Village could go on to prevent.” 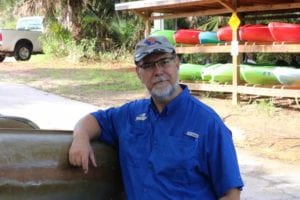 This technology that FGCU is using is very new. “Up until a few years ago, we could not identify what the exact source of the bacteria is,” notes Duke. “This is a much more elegant way of conducting this research.”

On top of its collaboration with the Village of Estero, FGCU is making major strides in regional awareness of water issues. In the same week the Estero River project began, The Water School co-sponsored the 2019 Save Our Water Summit held at the Hyatt Regency Coconut Point. More than 600 were in attendance, including Florida Governor Ron DeSantis. All came with the goal to leave the summit with more knowledge and a game plan for how to tackle the water issues in Southwest Florida.

“The best thing to do is to talk to your legislators,” advises Gov. DeSantis. “When legislators are hearing it from their neighbor, it means a lot more.”

This is not the first time the governor has supported FGCU with his presence. Back in January, he announced his environmental plan 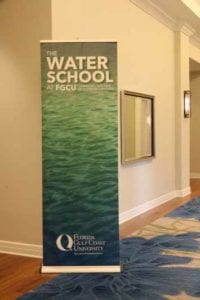 “It’s great to have the governor backing FGCU and being so supportive of The Water School,” says the school’s director, Greg Tolley. Current faculty research focuses on regional needs but has statewide impacts that are putting FGCU on the map, he adds.

“Tell us what your passions are,” says Tolley, “and we will find a place for you at FGCU.”

For more information on The Water School and its collaboration with the Village of Estero, please email TheWaterSchool@fgcu.edu.