If you happen to be dining at one of the myriad restaurants in the area, it’s quite possible your taste buds will be dazzled by someone as young as a high school student.
There’s something special going on at Estero High School. A 37-year-old former criminology major is heading up a culinary program here. Chef Jeremy Jasper is in his eighth year at EHS, where he has helped build an incredible program and inspired exceptional results in the kitchen. 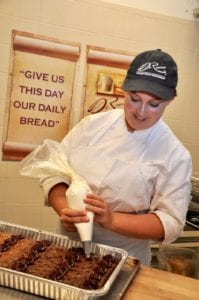 “My number one goal is getting the students more involved in the program, then gaining recognition in the public and community support,” says Chef Jasper.
Not only is he looking to build the program so that it can sustain itself for years to come, but he is producing some culinary magicians. Junior Amy Hallifax is one of his pupils who is excelling beyond imagination. When she was 10, she loved to bake, but thought it was a passing phase, a hobby. When she came to EHS, she fell hard for the world of culinary arts. She recently finished second in the state for Florida’s Pro Star Competition. She not only received a medal, but a $5,000 scholarship as a result. 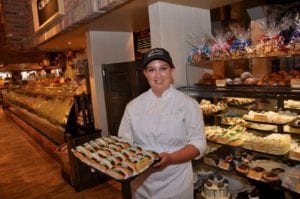 “There were a lot of mixed emotions for me. It was my first real competition. I was nervous and excited,” recalls Hallifax. Did she stop there? Absolutely not. She is also working at DeRomo’s Gourmet Market and Restaurant as the youngest person on the culinary staff.
“They definitely give me respect, especially when they found out about the competition,” says Hallifax.
Chef Jasper added, “When they do what they do — competing, being the youngest people on staff — you can’t put a price on that kind of education.”
Amy Selva, the grocery manager at DeRomo’s, is pretty blown away by what she sees from Hallifax. “It would be nice if what she’s done could inspire her peers to have a skill and a passion to utilize their hands in ways other than their cell phones. It would be an amazing trickle-down effect,” says Selva. “Most millennials at this point don’t even have a direction. She not only has it, but she has passion. She looks at a melon and sees a peacock.” 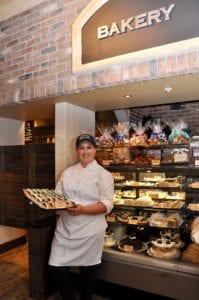 And then there’s August D’Angelo, whose last name seems nearly a lock for him to own his own restaurant. He’s dual-enrolled at EHS and Florida Gulf Coast University and works as the youngest member of the culinary staff at the Hyatt Regency Coconut Point Resort and Spa.
“I feel like I have to prove myself, coming here and being so young,” says D’Angelo.
The Hyatt’s Executive Chef, Andreas Singer, is impressed by what D’Angelo brings to the table (pun intended). 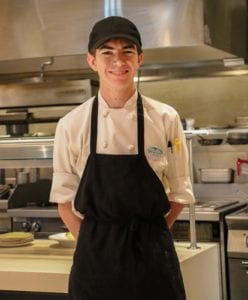 “He’s amazing,” says Singer. “The dedication that he shows…he’s smarter than the rest of us. He’s so mature for his age, and it’s very refreshing. I hope we can have him here for many years to come.”What is it that fuels this busy young man? As he puts it, “I have a passion for cooking. To see those smiles when someone tastes the dish I made. That’s everything.”
D’Angelo is thrilled to be on staff at the Hyatt. “It’s amazing to be here,” he says. “There’s more to learn than I ever thought possible.”
His favorite dish to make is spaghetti carbonara. When he talks about making this meal, D’Angelo speaks with a level of maturity beyond his years: “There’s definitely very many layers of flavoring to it. If you forget one step, it’s not quite right. It’s the depth of the flavor that makes it.” 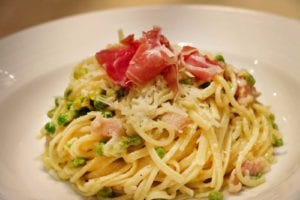 Chef Jasper smiles with pride when asked about his rising culinary program and the success of his student chefs. He is grateful for generous support from the Estero community. 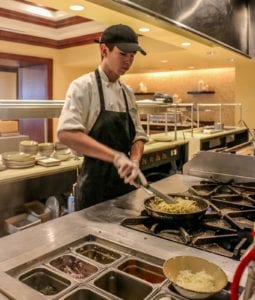 “This is a self-sustaining program,” says Jasper. “We don’t get funding from anywhere, other than what we can deliver.” Fundraisers, like the annual Evening Under the Shadow Wood, allow students to prepare a fare of fine dining in hopes of contributions. This two-year-old fundraiser, held at Shadow Wood at The Brooks and promoted by the Village of Estero, has raised $33,000, allowing students like Hallifax and DeAngelo to compete in an annual culinary competition in Orlando. Donations also help fund upgrades to kitchen equipment at Estero High and purchasing of products for students to work with in class.
“The support they’ve given us in Estero, the Village Council in particular, has been tremendous,” says Chef Jasper.
The caliber of this special program continues to rise each year, with the EHS Culinary Program offering undeniable flavor for those in the area to enjoy.