As Living Waters Church surges into its new building at the former Albertsons grocery site in Estero this month, everything will be fresh and new. Although the church’s new site is less than eight miles from its former home on Bonita Beach Road, it is worlds apart in design. “We should have a pretty good vibe going on here,” says Lead Pastor Ed Ivie, a 40-something visionary with big plans for his growing congregation. Everything about the church and its accompanying preschool academy has been researched, reviewed and re- imagined during the building transition. From a new logo to a newly created superhero for the children’s ministry called Hydro, everything about this church is as fresh as the paint on the walls (ﬁttingly, in a new, modern industrial palette).

“We were able to build a building that really ﬁt who we are,” Ivie explains. “I often say we were a Size 10 trying to wear a Size 8 shoe.” Living Waters is passing its more traditional church building on to the Center for the Arts of Bonita Springs, which has transformed it into a Performing Arts Center. “I think it’s a great ﬁt for them,” Ivie says. “It was great timing for them and great timing for us.” The auditorium at the old building seats 375, ideal for most of the art center’s performances. Living Waters’ new, state-of- the-art auditorium seats almost 800. “I think we will experience some good, dramatic growth at the beginning,” Ivie says, noting the location directly across the street from where Hertz is building its new global headquarters. 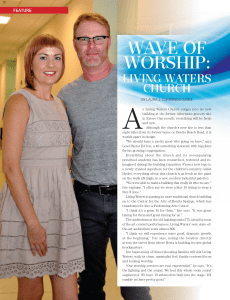 Ivie hopes many of those relocating families will visit Living Waters, with its clean, minimalist feel, family-centered focus and rocking worship. “Our worship services are real experiential,” he says. “It’s the lighting and the sound. We had this whole room sound engineered. We have 10 subwoofers built into the stage. It’ll rumble in there pretty good.”

Outside the auditorium, churchgoers will ﬁnd a full commercial coffee shop and cafe. “Anything Starbucks can do, we can do,” says Ivie, explaining future plans for the coffee shop to be open to the public, with proceeds going to the church’s missions. “We want to provide an atmosphere where it’s super easy for people to connect in.” Living Waters owns the entirety of what was formerly the Williams Place Shopping Center, which housed a gas station, dry cleaner, nail salon and Chinese restaurant. All tenants’ leases were terminated, leaving the out parcels for church use. LW Fitness will offer pilates, spinning and other exercise classes. There also will be casual spaces for small groups which meet throughout the week.

“Small groups are really the backbone of our church,” says Ivie. “We have them all over the city; they meet at Panera, in different homes, and at the church.” The new building also will offer more exciting spaces for children and youth. “We’re really going all out,” Ivie says of the rebranded “Aqua Kids” program. The children’s chapel has a 60-inch ﬂat screen, and classrooms are partitioned with hip, rolling steel doors leading to a play area with a slide, tunnels and a track for trikes. “The teachers will use iPads and Keynote to do their teaching time,” Ivie adds.

Security also will be high-tech, with computer kiosks for parents to use at sign in, which will print out matching sticky labels for parent and child. A future Youth Center will include a three-on-three basketball court, video games, and cafe, Ivie adds. Everything is designed around the church’s ﬁve-fold mission: Children’s ministry, youth, small groups, missions and weekend worship experience. “We want to be the Ruth’s Chris of those ﬁve areas rather than be the Golden Corral and trying to do it all,” Ivie says. Nonetheless, Living Waters boasts a dazzling diversity of ways to get the community plugged in. LW Academy, the church’s preschool, opened at the new location in June with 101 children.

Like the church, the school’s look, feel and philosophy have been modernized. Instead of loud primary colors, the academy features the same clean palette as the church – white, blue and gray. Classrooms and walls are kept uncluttered, with artwork neatly hung from strategically placed cork-board strips. “We purposely designed the space to feel minimalistic so the focus can be more on teaching,” explains Christy Ivie, the lead pastor’s wife and an Executive Pastor over the academy. From bathrooms to break rooms, everything was designed for efficiency, she adds. The minimalist approach also allows easy cleaning and provides a calming atmosphere, says Academy Director Stephany Abraham. “Every thought was put into the best learning environment for the kids and the best work space for the teachers,” she adds.

The academy’s tagline, “Anchored in Excellence,” is substantiated by its perfect score from its accreditation agency, the Florida League of Christian Schools, which bestowed LW Academy with its School of Excellence Award. This is not gloriﬁed babysitting, Ivie notes. Teachers are certiﬁed and use a respected Christian curriculum, with an enrichment program offering instruction in French, Spanish and art. The academy also has implemented new standards for snack time: “We’ve selected a menu that is very health conscious with fruits and vegetables, organic and gluten-free items,” Ivie says. While the academy is full ﬂ ow, the church will open its doors for worship services the weekend of September 27- 28. With its fresh face and modern mission, Living Waters will surely make a splash in Estero.