Many people look at someone without a limb as “disabled,” pitying them for what they can’t do. But 13 amputees are proving they’ve got more grit than most able-bodied athletes. The Louisville Slugger Warriors National Amputee Baseball Team recently played in its first national tournament over Memorial Day weekend in Las Vegas. 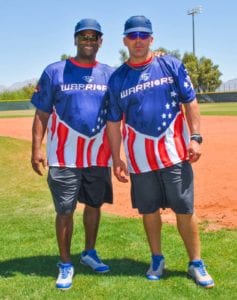 The roots of this amazing team stem from the vision of Estero resident David Van Sleet, who founded the Wounded Warriors softball team in 2011 with the motto: “Life without a limb is limitless!”
The Warriors continue to prove this as the all-amputee team turns from softball to baseball. This ups the challenge tremendously: Three-hour games instead of one-hour games, nine innings rather than seven, and bases spread an additional 30 feet apart. 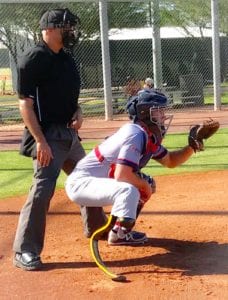 The leap to baseball began with a request from Steve Sigler, founder and president of the Men’s Senior Baseball League/Men’s Amateur Baseball League (MSBL/MABL), the premier amateur baseball league for adults 18 years of age and older. He contacted Van Sleet about fielding an amputee baseball team to play in the 30th annual MSBL World Series, which took place near Phoenix in October 2017. The Warriors rose to the challenge but realized they would need to procure top amputee athletes if they were to become competitive in baseball.
Supported by the Washington Nationals, Van Sleet organized nation-wide tryouts in January 2018 at the Ballpark of the Palm Beaches in West Palm Beach (spring training home of the Nationals). 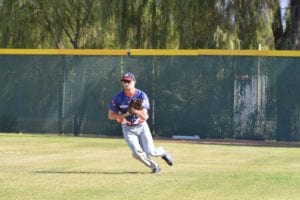 “It was not a quick and simple process to find a team of extremely athletic and skilled amputee ball players,” says Van Sleet. “But, through a national tryout and after extensive research and collaboration with various references and prosthetic vendors, this team now consists of 13 players, 11 with college baseball experience.”
The team includes many U.S. Military veterans and active duty personnel, including five of the former Wounded Warriors softball players. Each of these highly skilled athletes have either suffered a trauma-related loss of a limb or have a congenital deformity. Several players have prosthetic hands or legs; one has an ocular prosthesis and another a hip prosthesis. 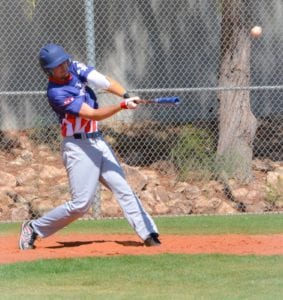 “I am very excited to be a part of this team,” says Daniel Williams, who is missing his left hand. “I hope we can be a source of inspiration to others who are dealing with challenges in their lives and show them that you really can do anything you set your mind to, even without being ‘normal.’”
Another one-handed player, Parker Hanson, pitches at an amazing 92 miles per hour. Then there’s U.S. Army Veteran Carlo Adame, a true “wounded warrior” who rounds the bases with a below-the-knee prosthesis.
“This team means a lot more to me than just playing baseball,” Adame says. “I get a chance to play baseball at an elevated level alongside brothers that have fought a lot of the same physical and mental battles as I have.” 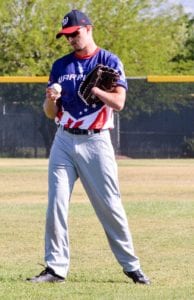 Louisville Slugger has been a longtime sponsor of the Warriors and is excited to support the team’s advancement to baseball.
“These men have far exceeded rehabilitation expectations and deserve an opportunity to test their ability to play against whole, athletic and otherwise normal baseball players,” says Louisville Slugger Team Advisor Dennis Turner.

MSBL Las Vegas Open
The LS Warriors Amputee Baseball Team played in its first national MSBL/MABL tournament over Memorial Day weekend. Playing against competitive, able-bodied teams from the West Coast under sunny skies and 90-degree heat, the Warriors played their first tournament game on May 26, which proved to be quite competitive. The Warriors won 9-8 in the last inning against the Las Vegas 55’s. In the second game on Saturday, the Warriors lost 13-4 against the Orange County Dodgers, completing their first day of competition with one win and one loss.

Going into a must-win third game on Sunday to qualify for the playoffs, the LS Warriors came up short by one run, losing 6-5 against the Angels from California. For its first national tournament, the team exceeded expectations, but the LS Warriors fell short of their goal of advancing to the final round. They are determined to keep training and perform well in the MSBL/MABL World Series this coming October, says Van Sleet. 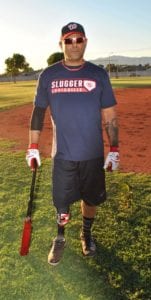 The MSBL/MABL has committed to contributing more than $35,000 annually to the LS Warriors. The league has 325 local affiliates, 3,200 teams and 55,000 members who play organized amateur baseball in local leagues, 30 regional tournaments and six national tournaments annually.
“The LS Warriors are a wonderful team to host and compete with,” says Sigler. “We all need more ‘feel good’ stories, and each one of them deserves that label.”

Major League Baseball Influence
Upon hearing of the LS Warriors, the Washington Nationals quickly expressed a commitment to support the team. In gratitude, the Warriors will be wearing the Nationals’ official game hat during all of their practice sessions and tournament games.
The Warriors also have secured three former Major League Baseball players to head up the coaching staff. Curtis Pride, Kevin Mench and John Kruk bring their vast cumulative experience, each volunteering their time and carrying their passion for the game of baseball forward through their commitment to the LS Warriors.
Head Coach Curtis Pride, a challenged athlete himself having been born deaf, sets high expectations for the team.
“All of these guys have a story to tell on how they overcame some tough physical and mental obstacles to be where they are at today,” says Pride. “They inspire me every day with their passion and determination to be the best. As the first team of amputee baseball players, we aspire to do great things this year.”

Another former MLB player who influenced and inspired a few of the LS Warriors players significantly is Jim Abbott, who was born without a right hand.
“I have heard great things about your team and the incredible passion and determination you bring to the game we all love,” Abbott wrote to the Warriors. “I wish you every success as you take on competition from around the country. Go out there and show the world that there isn’t any one perfect way to play the game; you can play it in your own way and play it just as well as anyone… anywhere. As you run out onto the field, please know that you have support from around the country.”
As Americans everywhere cheer on this inspiring team, few know the Southwest Florida start to this continued story of determination, perseverance and grit.
“I think with the LS Warriors, I’ve found something everyone is look for,” says Van Sleet , “and Estero can say it all started here.”
Follow the success of the LS Warriors Team on Facebook, Twitter and Instagram.