Due to the ongoing COVID-19 pandemic, the Village of Estero will not hold its annual Veterans Day event this year. However, we want to sincerely thank all veterans living in Estero and acknowledge their sacrifices for our freedom. Here, we highlight five local veterans, each representing different eras of service and each with unique stories of valor.

A native of Cleveland, Ed Floridan joined the U.S. Navy as a submariner in March 1944 at the age of 18. His two brothers also served during World War II. 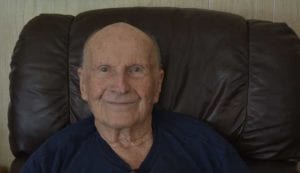 Florian served on the USS Brill, a new submarine, as an electrician. To qualify as a submariner, a sailor had to be physically fit with great vision—and not too tall. Navy submarines were typically about 300 feet long and carried a crew of 75.

Near the end of the war, Florian was stationed in Fremantle, Australia, where he reported “life was good.” Each patrol lasted about six weeks, with 80 percent of the time spent “above the water” and the submarine diving only when an enemy approached. In the South Pacific, the main targets were tankers and freighters—any vessel that tried to provide supplies to the enemy.

Back in the United States after the war and until his discharge in May 1946, Florian served on the USS Clamagore, a submarine built in 1945 operating out of Key West. After leaving the service, Florian returned home to Ohio where he and his wife raised their three children. He worked as an electrician before joining the fire department in Shaker Heights, Ohio, retiring after 31 years of service. 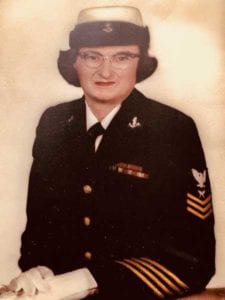 Estero resident Ruth Blake enlisted in the U.S. Navy in 1944 near the end of World War II. President Franklin Roosevelt had signed the Women’s Reserve Act into law on July 30, 1942, allowing women to enlist in what was known as the WAVES — Women Accepted for Volunteer Emergency Service. Blake enlisted when she turned the minimum age of 20.

By the end of the war, the WAVES numbered over 8,000 officers and 80,000 enlisted members and served in 900 shore stations in the continental United States, rarely aboard ships. Blake was a Seaman, Third Class, stationed in New Orleans and San Diego.

Unlike many of the WAVES, Blake continued serving in the U.S. Navy after the war. She served during the Korean War in the early 1950s and the beginning of the Vietnam War later that decade. Blake left the Naval service in 1966 after serving 22 years. Today, she enjoys living in Estero and drives a large, diesel-fueled pickup truck around town.

Born in 1931 in New Jersey, Ray Bielicki delivered newspapers with his father to make ends meet. His family of five lived in a two-bedroom home, heated by a wood stove. In high school, he was the captain of the football and baseball teams, and he received a football scholarship to Rider College. He was drafted before completing his degree. 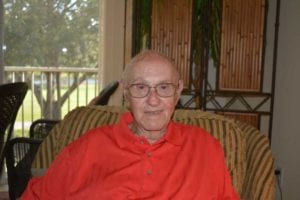 In the Army, Bielicki trained as an engineer. His initial assignment to Korea was with the 1st Calvary Division, which included his unit, the 8th Engineering Battalion, along with other regiments, armor, artillery and support groups.

Bielicki was in Korea for just 60 days, where his division saw intense fighting. With reinforcements, the United States and United Nations forces were able to push the enemy to the north. As a grim reminder of their remarkable legacy, the 1st Cavalry Division experienced causalities of 12,053 wounded, 3,175 killed in action, 670 Prisoners of War—180 of whom died in captivity—and 545 Missing in Action, of whom 448 were eventually declared dead.

After Bielicki’s short time in Korea, he was assigned to Northern Japan, where he helped develop sporting facilities and activities on the base. He was discharged in June 1953 and returned to New Jersey to complete his education at Rider University.

Bielicki, who is married to Barbara and has one child, worked in the sporting goods industry before joining the Camden, NJ, Police Department, serving 10 years. He then accepted a position with the New Jersey Public Safety Department and retired after 25 years of service.

Born in Alabama and raised in Hollywood, Fla., Dan Croft enlisted in the U.S. Army in December 1966. In January 1968, he was deployed to Vietnam as a helicopter pilot where he was assigned to the 116th Assault Helicopter Company in Cu Chi, headquarters of the 25th Infantry Division, about 50 miles west of Saigon. 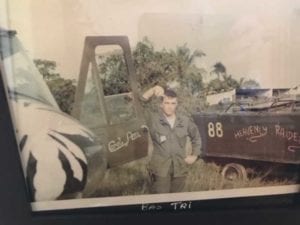 Croft arrived just before the start of the largest North Vietnamese and Viet Cong offensive of the war. Within two hours of his arrival, rockets were falling into the compound where he was stationed. For the next three months, Croft’s unit had to fly soldiers into hotspots throughout the region, often amid heavy gunfire, for 12-15 hours a day. “We lost several good men and numerous helicopters during that period,” he said.

Croft returned to the United States in January 1969 and was stationed at Fort Wolters (Texas) as a helicopter instructor pilot. He was commissioned to First Lieutenant, trained on Chinook cargo helicopters, and was deployed back to Vietnam in October 1970. He was assigned to the 179th Assault Support Helicopter Company (ASHC), which was called upon to support the largest helicopter operation of the war, Lam Son 719. Many U.S. helicopters and crews were lost during this operation.

After the 179th ASHC was ordered to stand down in the summer of 1971, Croft was sent to Chu Lai for two months. He returned to the United States in October 1971 as a Captain. After numerous assignments in aviation, artillery and joint services, Croft retired from the military in 1991 as a Lieutenant Colonel.

He and his wife, Carol, married during Croft’s first year in the Army and have two daughters and four grandchildren. After retiring from the military, Croft worked for the State of Florida before joining Collier County government, becoming Fleet Management Director in 1996. He and Carol are active members of Bonita Springs/Estero Elks Lodge.

Jerod P. Murphy, Chief Warrant Officer with the U.S. Marine Corps, was born in 1976 in Sun Valley, Calif., and attended high school in Albuquerque, NM, before enlisting in the Marines in 1994, where he learned to repair assault amphibian vehicles. 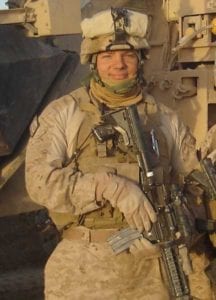 In May 1996, Murphy was transferred to Camp Pendleton, Calif., where he served in the 1st Maintenance Battalion. He was deployed to the West Pacific, participating in Operation Southern Watch until June 2000.

After serving as an inspector/instructor with the 4th Assault Amphibian Battalion, Alpha Company in Gulfport, Miss., he deployed in support of Operation Iraqi Freedom in March 2003. During this tour, he also served as team leader for the Emergency React Team and participated in rescue operations during hurricanes Katrina and Rita.

In 2005, Murphy was selected to Warrant Officer and later transferred to Camp Pendleton, Calif., where he served as Platoon Commander. During this tour, he deployed in support of Operation Iraqi Freedom in 2006 and again in 2008.

In 2011, he deployed in support of Operation Enduring Freedom in Afghanistan. Several promotions followed. In 2017, Murphy joined the Marine Corps Detachment at Fort Benning, Ga., as Academics Officer.

In May 2020, Murphy retired from the Marine Corps after nearly 26 years of service. His numerous personal decorations include the Navy and Marine Corps Medal, Purple Heart, two Meritorious Service Medals, the Humanitarian Service Medal and the Outstanding Volunteer Service Medal.

He and his wife, Jenna, have chosen to retire to Estero to raise their family. Murphy now works as operations supervisor for Hearts and Homes for Veterans, where he continues to give back to the veteran community. Hearts and Homes is a nonprofit with a mission to support homeless veterans, and their families, who find themselves without the necessities of everyday life, assisting them in repatriating back into our community as active and productive citizens.