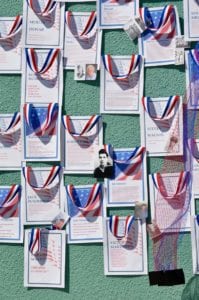 The Village of Estero’s inaugural Veterans Day program drew a large crowd to Estero Community Park in honor of local residents who have served in the U.S Armed Forces.

“When we think of all who served in the Armed Forces, we should think of honor, loyalty, freedom and sacrifice,” said Estero Mayor Jim Boesch in his keynote address. “In my mind, there is no higher service in the eyes of God.” 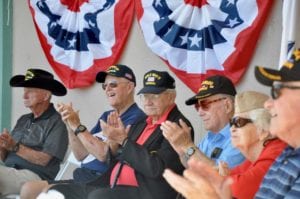 Estero veterans were invited to fill out biographies, which were printed and hung decoratively near the stage. Several veterans of World War II were invited to be seated on stage for special honor.

The Village of Estero extends appreciation to all of those who have served our nation in the Armed Forces and looks forward to making the Veterans Day program an annual tradition. Below is a sampling of our many fine Estero veterans who participated in the ceremony: 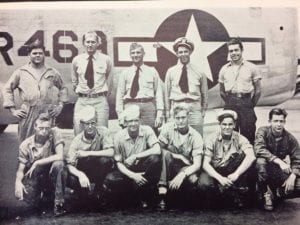 Thomas Donaldson, 95, enlisted in the U.S. Navy in September 1942 and trained as a naval aviator. He served on active duty during World War II until December 1945. On Aug. 15, 1945, he was flying with a patrol off the coast of Formosa (now Taiwan) when they came under fire from the Japanese — the same day Japan announced its surrender. 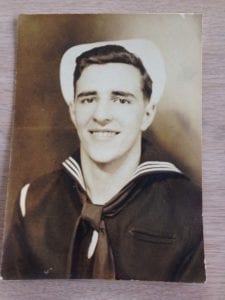 Anthony Gentuso, 93, enlisted in the Navy at age 17 and had to have his parents sign for him. He served on the USS Enterprise aircraft carrier from May 1942 to May 1946. His  tour of duty included 18 major battles (including Iwo Jima and Okinawa); his ship was put of commission by a Japanese kamikaze. He was awarded numerous medals including two silver stars and two bronze stars.

John Parker, 90, joined the U.S. Coast Guard on Aug. 6, 1943, and was part of a submarine patrol in the Philippines and elsewhere. His unit was preparing for the invasion of Japan before it announced surrender. He was discharged in February 1946 but later joined the Air Force Reserves in 1955, serving for an additional six years.

MaryAnn Kylander Sholtis, 94, served as an Army nurse during World War II with a rank of 2nd lieutenant. She was posted in a hospital at Camp Atterbury, Ind., where she cared for many wounded soldiers returning from the Battle of the Bulge and the Bataan Death March. She is a charter member of the Women’s Memorial in Washington, D.C.

Ronald Goodlin served on active duty in the Air Force for 23 years and six months from 1951 to 1974, followed by four years in the Georgia Reserve Army. He performed air crash rescues, served domestically and in northern England, and went through jungle service training for Vietnam.

John “Wayne” Neubauer enlisted in the U.S. Marine Corps in July 1955. He was commissioned after 10 years and transferred to Vietnam. He received one Purple Heart and retired as a major in September 1975 after 20 years of service to his country. 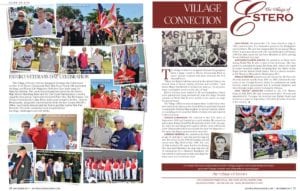 The Village of Estero