The retirements of two great Estero advocates is upon us this month. Dick Schweers, chairman of the Board of Commissioners for Estero Fire Rescue, and Don Eslick, chairman of the board of the Estero Council of Community Leaders, are departing from their respective positions in October. Both men are well known as resolute champions of Estero, restoring and establishing some of its vital community functions. They are both good at recruiting talented individuals, and modestly giving credit to anyone but themselves for making Estero the beautiful community it is today. 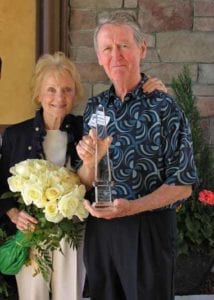 Have you ever noticed how harmonious Estero’s architecture is? Or shopped at Coconut Point Mall? Or used the services of the new Lee Health Coconut Point? Then you have been touched by the tireless work and unusual acumen of Don Eslick, known by many as “Mr. Estero.”

After an already accomplished career in education and public service, Eslick moved to Estero with his wife, Suzie, in 1999. Seeing the growth possibilities in the sparsely populated area, he and a few others started the grassroots organization that would become the Estero Council of Community Leaders (ECCL). They started organizing community support in 2002, with the planning and building of Coconut Point Mall, and established a Community Planning Panel in order to hold new developments to high architectural standards. Subsequent projects channeled the voice of the community into bringing emergency healthcare to Estero, improving transportation and incorporating Estero into a village.

In his 17 years of organizing grassroots support for Estero and its causes, Eslick has always had his ear on the heartbeat of the community while possessing the talent of seeing not only what our village needs right now, but also where it needs to go in the future. For his sustained and dedicated efforts, Eslick has been named the Lee County Citizen of the Year (2006) and the “Visionary of the Decade” (by the ECCL in 2011). 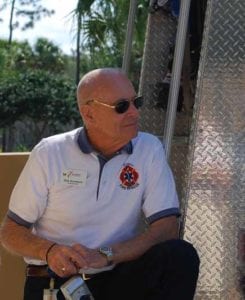 “Don is a visionary who came to Estero at just the right time with just the right skills, knowledge and vision to take Estero from ‘a point between Naples and Fort Myers’ to a place that is admired by many for a beautiful, well planned community that has more people who are involved than almost any other area in Lee County,” states Estero Village Councilmember Nick Batos, who served as ECCL chairman from 2012-15.

(Eslick resumed the chairmanship when Batos ran for the inaugural Village Council).

Despite thousands of hours of volunteer work and his expertise in everything Estero, Eslick remains humble. He insists that his strength is mostly in finding and recruiting people who care: “Estero is uniquely blessed with a great variety of retired talent,” says Eslick. As a testament to his words, the ECCL continues to attract people highly experienced in diverse corporate and government fields.

His biggest accomplishment, he admits, is helping create a sense of community for Estero.

“No one person has contributed more to creating the beautiful community we live in than Don,” says Beverly MacNellis, formerly of the ECCL, who is organizing a retirement celebration in his honor. “He is a man of integrity and has worked tirelessly and selflessly for Estero.” 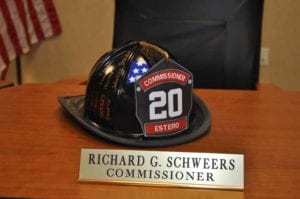 Jim Gilmartin, the newly installed ECCL president, confirms this sentiment: “It will be very, very difficult to replace Don as one person — it just wouldn’t work.” As a result, the organization is in the process of a major restructuring.

Despite his retirement, Mr. Estero plans to stay busy. He will stay on as an ECCL board member. He is also actively involved in Lee Future, a nonprofit advocacy group dedicated to informing Lee County citizens, building a sustainable future and holding elected officials accountable. The organization is hoping to engage the community in issues like improving water quality and limiting mining.

“We all should be forever grateful to this generous man,” says MacNellis.

His retirement celebration will take place on Nov.16 at Shadow Wood Country Club at The Brooks. Tickets will be available for purchase on the ECCL website: www.esterotoday.com. 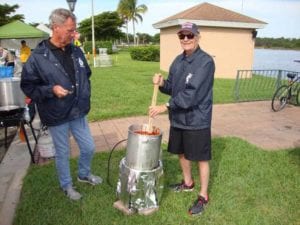 Dick Schweers jokes that he was dragged into his post-retirement career of Estero Fire Board Commissioner “kicking and screaming.” In 1996-97, the Estero Fire District was suffering from bad leadership and a lack of resources. In January 1997, after a routine training exercise, the Fire Chief dismissed all 11 firefighters right in front of their replacements: hired hands from the Wackenhut Corporation.

“I’ve been in management,” says Schweers, “and you don’t treat people that way. It’s just not right.”

The community reacted by picketing the fire station. The amount of people that came out to protest surprised Schweers, and he started following closely the developments. By August, one of the Wackenhut replacements had died in a fire, proving this was a job for trained professionals. Four members of the fire board were arrested for breaking Sunshine laws, and consequently, the fire chief himself was arrested for stealing picket signs. Estero Fire Rescue was left with no management and no firefighters. 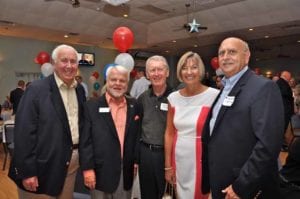 Despite refusing the job previously, when Gov. Lawton Chiles asked him to become a commissioner, Schweers accepted.

“I was kind of intrigued by the whole thing,” he says, recalling the chaos he walked into: “What we had there was an old barn, two old trucks, six guys, no chief and a half-a-million dollars in debt.”

Today, Estero Fire Rescue (EFR) has four buildings, a fleet of state-of-the-art engines to cover the Advanced Life Support services introduced in 2000, and a large crew of firefighters and paramedics, who go through extensive internal medical training. Their job is to respond to calls within the 56 square miles of the Estero Fire District, stretching from Estero Bay east to the Collier County line.

“In the years he’s been on the board, Dick has organized it into shape where Estero is one of the premier fire districts in the county,” praises fellow Commissioner Jeff Maas.

Schweers refuses to take credit for the advancements made during his tenure: “Honestly, I feel they give me too much credit sometimes, because you don’t do it alone. I know how to bring people in, and we have wonderful people.” 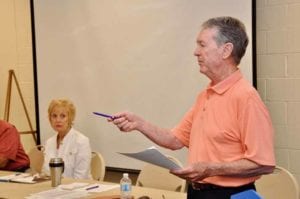 Schweers is the loudest cheerleader of the EFR staff, especially Estero Fire Chief Scott Vanderbrook, saying, “Did we get lucky with him!” He also praises his fellow commissioners:  “We have great brains on the board and on the staff. The trust is great.”

Schweers considers all the Estero firefighters as family. The fire board organizes breakfasts each quarter, sitting down with firefighters and listening to their stories. Schweers enjoys sharing meals with firefighters — who, true to stereotype, are great cooks — and takes an interest in hearing about their lives and families. He especially likes participating in the annual EFR-sponsored Chili Cook Off each spring, teaming up with his fellow commissioners to concoct the perfect recipe to wow the judges and earn the People’s Choice Award, which it often does.

After a 59-year career (including 22 years with EFR), Schweers is looking forward to retirement but has plenty to keep him busy. He coordinates mass every Sunday at 5:15 a.m. at Our Lady of Light Catholic Community. He is active with the Notre Dame Club of Southwest Florida, having served as its president. Schweers raises thousands of dollars for the Harry Chapin Food Bank as part of Hunger Walk each February, and he maintains a keen interested in Republican politics.