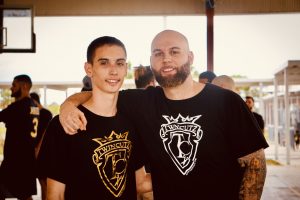 The hair industry and the hospitality industry came together to create TwinCutZ, and it was “like a hurricane,” according to Managing Partner Danny Womack. His friendship with TwinCutZ founder and Co-owner Sean Casey evolved into a business partnership and sparked an expansion which now includes TwinCutZ Studio in Estero.

Their newest concept opened at Coconut Point Mall at the end of 2020 and already has its fans.

“TwinCutZ is amazing,” said Samantha Stenson. “It took a while to find a salon to give me the perfect highlights and cut for my hair. I even take my 6–year–old son — he insists we go to TwinCutZ because, ‘Mommy, they are professionals.’ He won’t go anywhere else.”

Casey began cutting and styling hair while in high school, reflecting his creativity that led him to barber school instead of college, attracted by the artistic elements and the positive impacts great hair cuts can have in people’s lives. He left his successful barbering career in New York in the mid-2000s to be closer to his young son, who lived in Florida.

TwinCutZ’s success in Fort Myers followed the motto “Tailored Styles – Local Vibes,” and the Casey–Womack partnership built five barbershops before Estero. Casey is the hair industry half. Womack’s background in hospitality and his business acumen fed their shared passion to be great in the hair industry.

“Sean is recognized as an artist and master teacher for Paul Mitchell, Andis Clippers, Hanzo Sheers, Sports Clips, Great Clips and a top–tier hair industry list,” Womack said. “He concentrates on his art while I manage the business end.”

Recently, both men, with families to support, faced unexpected challenges. Their ability to communicate and plan together continued their momentum. Casey was diagnosed two years ago with stage 4 cancer that is currently in remission.

“Sean was amazing,” said Womack. “He would spend Wednesday in chemo and Thursday cutting hair and continued national teaching and traveling.” 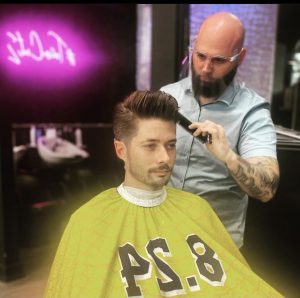 “Working was my therapy,” added Casey, “I had a family to support and medical bills to pay. I created a ‘Fade Cancer’ T-shirt campaign and sold them with a cancer ribbon design a person could color according to their cancer type.”

Five dollars for every T-shirt sold went to St. Jude’s hospital, and the balance helped Casey pay his own medical bills.

“The T-shirt campaign was bigger than me, and I still sell them,” said Casey.

Cancer patients who lose their hair often seek understanding from their barber or stylist, who not only helps with hair issues but also acts as a de facto therapist. The overwhelming support Casey received from his colleagues in the industry resulted in one–month donations from shirt sales ranking as St. Jude’s top donation that month.

The pandemic-induced shut down, at first shocking, provided needed planning time for going forward. TwinCutZ had been recognized by Gulf Shore Magazine as the “Best Small Business in Southwest Florida” in 2018. The original award plaque is part of the décor in the new Coconut Point TwinCutZ Studio, the concept born as they looked forward.

“I started out as a barbershop that provided tailored styling and services targeted to, but not exclusively for, men,” said Casey, who specialized in short styles, men’s grooming, fades and other tailored men’s services.

TwinCutZ Studio at Coconut Point offers a full range of services for men, women and children. This not only includes haircuts but also services such as color, lashes, teeth whitening, skin care and nails.

The TwinCutZ Studio décor provides comfortable, modern vibes with unisex appeal. Licensed barbers and stylists are as diverse as their clients– anyone may walk in with hair concerns and walk out a new person regardless of hair type.

“At the end of the day, credit goes to our experienced team of employees who provide great cuts and conversation,” Womack said.

According to customer Michael Sandsmark, “My first time going to the TwinCutZ location in Coconut Point, I was greeted with the feeling of a high–end salon. The space is nice, and the staff was great.

Sixty employees work at six locations in Ft. Myers, Cape Coral, Naples and Estero. Though they have been approached to consider franchises, Casey and Womack are currently focusing on organic and internal growth.

“Some of our experienced barbers have been included as minority partners so they see a future and investment in their growth with the company,” said Womack.

TwinCutZ Studio is more than a modern, unisex barbershop and hair studio; it’s also a locally owned family business growing with the community. Casey is barbering at Coconut Point, side by side with his son, Sean, Jr., who recently graduated from Paul Mitchell The School in Fort Myers. Womack lives in Estero with wife Courty and their three young children.

According to Stenson, “The staff, the ambiance, and the services are better than I can ask for. Thanks to TwinCutZ, we are staying in style here in Southwest Florida.” 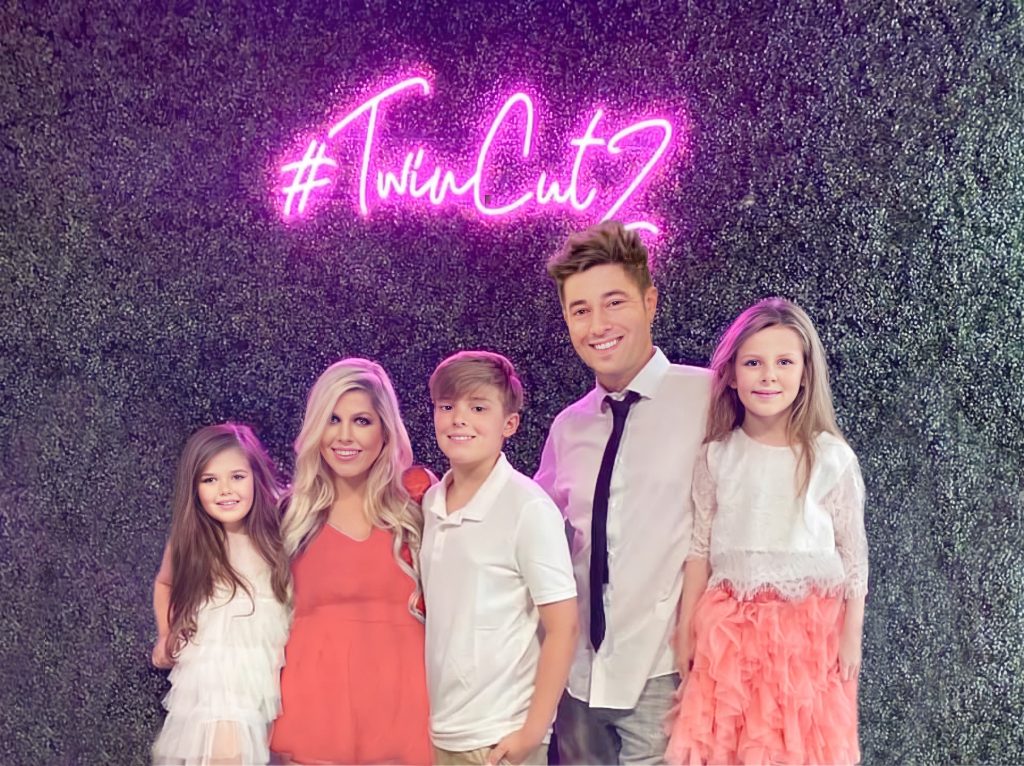 Danny Womack with wife Courty and their children