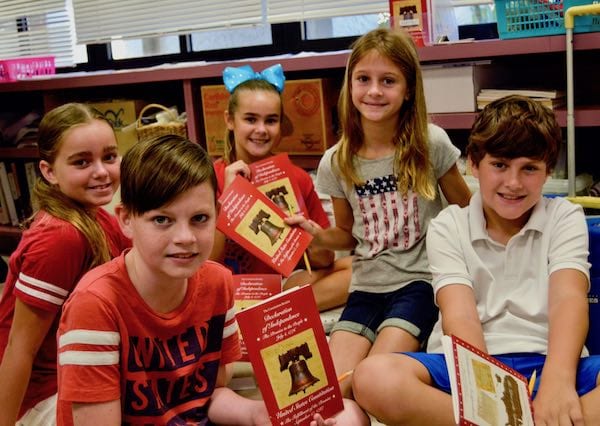 Mrs. Patsy Howell, gifted education teacher at Three Oaks Elementary, still has the U.S. Constitution booklet presented to her in fifth grade back in the early 1960s. It’s been a treasured reference over the years and one she’s shared with many students as they’ve worked on various projects exploring our nation’s history and government.

Now Mrs. Howell doesn’t have to share her booklet, thanks to the efforts of a local veteran who has made it his mission to equip all 220,000 fifth graders in the state of Florida with their own U.S. Constitution booklets. Joseph Cofield, a 21-year Army veteran and 15-year educator, started the “27-67 Constitution Project” in 2014 — 27 for the number of constitutional amendments and 67 to represent Florida’s 67 counties. In 2015, he visited each county, biking 21 miles and jogging six miles (27 miles total) while meeting with state and county officials, school administrators and service organizations in an effort to gain support for the cause.

“We worked a great deal with him to figure out his business model so he could keep his vision sustainable,” says Sandra Kauanui, director of FGCU’s Institute of Entrepreneurship.

Since then, Cofield has managed to rally support from many organizations including Daughters of the American Revolution, American Legion, Kiwanis, Rotary and others. Just three counties have ongoing funding (Bradford, Gilchrist and DeSoto) while others, including Lee County, still need an annual revenue source.

Sometimes it’s individuals who step in to fund the booklets for their local school at a cost of $1 each. Such was the case for Three Oaks Elementary, where 220 students received their copies of the U.S. Constitution compliments of a donation from Gene and Debi Montenieri. Last year, Cofield’s “Constitution for the People” became an official 501(c)(3) nonprofit organization, and Gene Montenieri serves on the board.

“The directors, advisors and supporters of Constitution For The People are doing their part to honor the wish of Benjamin Franklin that we continue to teach each generation so we can indeed keep our ‘Republic’ form of government strong,” says Cofield.

Last school year, Cofield was able to deliver Constitution booklets to 60 of 67 counties, despite the interruption of Hurricane Irma.

“I know that 2018-2019 will be the year that we finally achieve 100 percent of our mission,” he adds confidently. Cofield also notes that other states are starting to follow the model he’s established in Florida as some Rotary clubs in Ohio and North Carolina have purchased booklets for their local schools.

Cofield delivered the booklets to Three Oaks Elementary just in time for Constitution Week. Students in Dr. Rebecca Poppe’s fifth grade class made posters and rewrote the Preamble to create a “kids version” of the Constitution. Students in Mrs. Howell’s gifted program took it a step further by researching and reporting on the 19th amendment, which gave women the right to vote.

Mrs. Howell also had students compare their booklets to the one she received so long ago to see which amendments have been added in the last 50 years. She hopes her students cherish their Constitution booklets, as she has hers, and keep this foundational document in mind as they mature into voting citizens.

“Sometimes I want to cry as I go through the Constitution,” says Howell. “I told the kids their job is to vote.”

Cofield and Montenieri were so impressed by the students’ engagement and knowledge of the Constitution that they returned to Three Oaks Elementary the following week to award Constitution bracelets (normally sold as a fundraiser for the Constitution Project).

“Dr. Poppe shared Constitutional drawings that her class made after reading the booklet. Some students went so far as to take a thicker than normal paper, wet it, crumble it, then dry it to resemble parchment paper,” marveled Montenieri.

The path toward good citizenship starts at the elementary level, asserts Cofield.

“Our fifth grade students can start building a solid foundation which they will expand upon each level of their educational journey, and our nation will be much better for the time and resources we devote,” he says, pointing to the heart of his enduring mission. “The students may share this Gold Standard United States Constitution Booklet with their parents, siblings and friends. Thereby, the students are constantly learning of ‘The Law of the Land’ both inside and outside the classrooms. I truly believe this is the solid foundation that will make lifelong learning so enjoyable each day for our youth as they continue their educational journey.”

For more information on the Constitution Project or to help Constitution for the People fund booklets for a local school, visit www.ConstitutionProject.us.