While seated around a crackling fire, guests hear a lion roar in the distance followed by the bark of a hyena. Suddenly, from the bush, Maasai warriors in full, brightly colored regalia appear, chanting and performing their high-step celebration dance. The lives of the Maasai today carry on the traditions of their ancestors for over a thousand years. They take pride in sharing this experience with visitors.

Celebrations and special moments such as this abound during an African safari designed by Andrew Fentiman, founder and president of Safari Consultants of London (USA), headquartered in Southwest Florida.

Born in Sutton, England, Fentiman’s love for what he describes as the “evocative romance and adventure of the African bush” reflects the adventurous spirit that took him and his sister on a hike through Europe at the ages of 14 and 16 – and he has since traveled all seven continents. 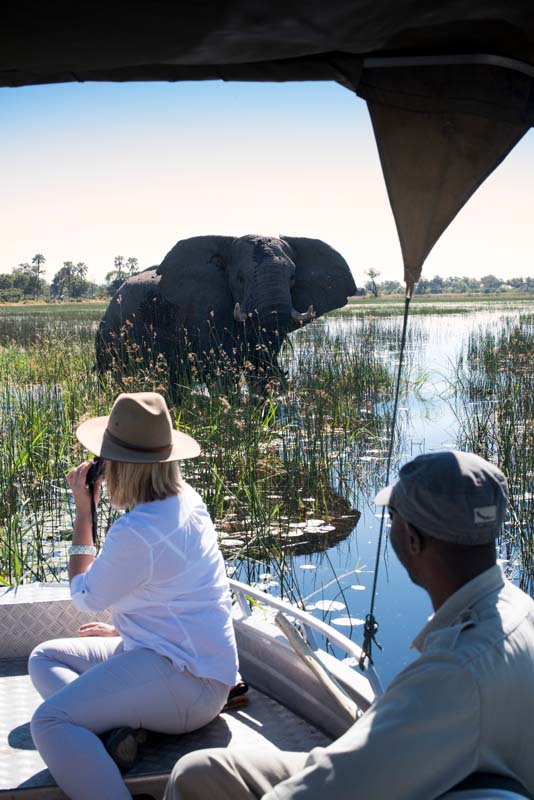 A professional safari guide in East Africa since the late 1970s, Fentiman has been escorting and custom-planning authentic safaris for nearly 40 years – and since 2003, from his home in The Colony at Pelican Landing. He met his wife, Jacqueline, in 1986 on a walking safari he planned and has called the U.S. his home since 1987.

“Africa is a place where I never tire of returning to over and over again,” says Jacqueline.

In August 2019, she and Fentiman will travel with a group of discerning fellow-travelers on what he has planned as a once-in-a-lifetime trip to South Africa, Zimbabwe’s breathtaking Victoria Falls and Botswana. Traveling at the best time of year, they will visit predominantly smaller, boutique-style properties on private wildlife concessions with emphasis on luxurious accommodations and modern, light aircraft travel to maximize the safari time and experiences.

“I recommend planning two years in advance to secure the best properties, guides and activities,” advises Fentiman. Africa is in vogue.

“My clientele is strictly by word of mouth and referral,” adds Fentiman. “I have never had a dissatisfied customer. The smallest details meet the individual client’s needs for their safari experience.”

European aristocracy, American celebrities and Arab sheikhs, in addition to “regular folk” who seek a custom safari experience, have planned their safaris with Fentiman. There was the Polish Prince who shared a tent with both his wife and his girlfriend, and the American sports magnate who insisted on keeping a plane on “standby” 24/7 for three weeks at a cost of $45,000 in case he was needed back in New York (he never was).

Working directly with African concession owners, guides and resources for four decades, Fentiman has no middle man or agency fees. A first-class, completely custom experience may be financially comparable to an agency brochure — minus crowded parks where an open-top minivan spins out in the dust to catch up with a lion or a lodge pool is full of all-night revelers.

“It is only when you leave your own comfort zone and venture into the unknown that you stretch yourself; you learn, you grow and you feel 100 percent alive,” says Fentiman.

He has been tracked by a wounded lion in high grass, chased up trees by an elephant, rhino and Cape buffalo, charged by a silverback gorilla and hippo (on land and in the water), stalked by hyena and wild dog, and been in crocodile infested rivers and lakes — a little more excitement than he would offer most guests.

We blend in, right ?

We blend in, right ?

“The safari will surprise and surpass expectations and change preconceptions,” asserts Fentiman.

By sharing the African culture, guests find a warm welcome from people who like Americans and exude good humor, he adds. The scenery is breathtaking and the animals— many in jeopardy of extinction — are thrilling in the wild.

Tom and Cindy Davis, of Bonita Springs, say their African safari with Fentiman was their best vacation ever.

“It was the trip of a lifetime and exceeded all expectations,” says Tom, who adds that he saw every animal he could think of, including babies being born and close up encounters.

“We were never in danger,” he adds of the safari’s safety. He also praised the chefs, particularly lunch on the savannah, as well as the delightful music and accommodations, including rose petals leading to the bath. The Davises considered a second trip but didn’t believe they could improve upon perfection.

“Several family generations or couples may plan a safari together for bonding, choosing to share in some activities and go separate ways in others,” says Fentiman. Views from hot air balloons, a full-scale breakfast in the bush and horseback rides close enough to smell the animals, are among the many possibilities.

With over 120,000 acres to explore, offered accommodations range from lodges to luxurious tents with baths and impeccable service. Prince William proposed to Kate Middleton on the northern slopes of Mount Kenya, where rhinos and giraffes roam freely. Lewa Wildlife Conservancy is also on Fentiman’s itineraries and offers an amazing variety of activities. Some people stay for weeks.

Is Africa so far? Direct, 16-hour flights connect New York to Nairobi or Johannesburg. International flights are separate from safari planning and costs.  However, safari guests are always met at the destination and accompanied every step of the journey.

When the safari ends, Fentiman says the experience is often so moving that some people cry from emotion, returning to their own reality after feeling Africa’s magic. While they can’t always put it into words, guests are forever changed by the wonders of this once mysterious continent.

As a guide in 1979, Fentiman wrote: “I stalk game, hook giant catfish, explore, photograph, brew palm beer and read about old Africa. I climb a tree to watch elephants browse on acacia pods at noon while distant lions snooze on their backs. A rhino catches my scent and swaggers by below. The natural rhythm of each day on safari and the evocative romance and adventure of this African bush bring a smile to my face. What a wonderful life!”