Fresh faces are assuming leadership roles in the Rotary Club of Estero. Both the newly inducted president, Tom Patricca, and the president-elect, Peg Phillips, are working professionals who have joined the club within the last two years. 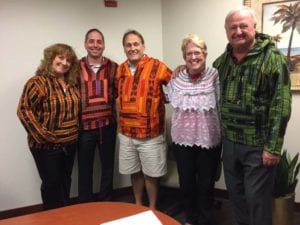 They bring renewed zeal for community impact, arriving ata time of restructuring for Rotary International’s Southwest Florida District. Last year, the Estero club and the three Bonita Springs clubs made an intentional effort to synergize, working together on service projects and fundraisers. The presidents of these clubs became known as the “Four Amigos” and were recently recognized at the annual District Conference for their cooperative efforts, including five fundraisers, eight socials, and nine service events.

This year, the regional district — which includes 51 Rotary clubs from Bradenton to Marco Island — has redefined its “areas,” adding the Rotaract Club at Florida Gulf Coast University and two Rotary clubs in North Naples to the mix. 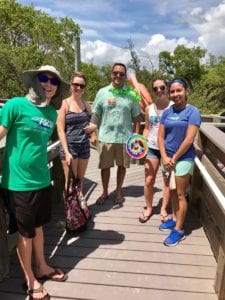 The newest club of the seven, Bonita Beach Sunset, hosted a Summer Solstice Beach Bash in June as a way for members of the seven clubs to become acquainted. And because every Rotary gathering incorporates an element of fundraising for charitable causes, this primarily social event also included an effort to get a water safety book — “Josh the Otter” — into local schools.

“Right before the sunset, there was a toast to world peace,”adds Patricca, who became the Estero club president in July.

Initially Patricca was hesitant to take on this leadership role, being a recent inductee to Rotary in February 2016.With a young family and a newly launched financial planning business, Patricca admits he started attending Rotary meetings to make business connections, but he quickly realized Rotary’s commitment to service goes beyond other networking groups. 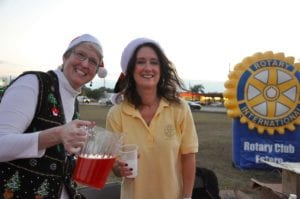 “As I started to attend the meetings, I just saw how much good Rotary does in the world and in the Estero area,”explains Patricca. “‘Service Above Self’ is not just a motto. It is a way of life for Rotarians.”

Now his goal is for the greater community to have the same revelation of Rotary’s value. He and Phillips are heading a committee planning this year’s Light Up Estero holiday event at Estero Community Park on Dec. 2. “Admission” to this free, community celebration has always been a nonperishable food item for the pantry at Interfaith Charities of South Lee. This year, however, Rotary also plans to raise funds toward new scholarships for Estero High School graduates.

While plans are yet to be finalized for Light Up Estero,the club’s annual golf tournament is set for Sept 23 at Vasari Country Club. The $150 entry fee includes hole contests,prizes and lunch while supporting Interfaith Charity’s Estero/San Carlos Park food pantry and other charitable causes.

Last year, the Estero Rotary Club donated more than$22,000 to local charities. Patricca and Phillips are brainstorming for a “big” fundraiser this year, possibly a car raffle that could raise $25,000 for youth programs in Estero.

“We want to really have an impact in the community this year,” Phillips says.

Among the Estero club’s priorities for 2017-18 is establishing a student Rotary club at Three Oaks Middle School. Estero Rotary already sponsors a Rotakids program at Three Oaks Elementary and an Interact Club at Estero High School. With the establishment of an Interact program at the middle school level, Estero students will no longer have an unfortunate “gap” in Rotary participation. 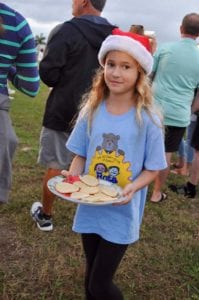 Phillips, who joined Rotary two years ago, has been highly involved with the Rotakids and will be the Rotarian charged with establishing the new program for middle school.

“The thing that attracts me about Rotary is it’s not just lunch meetings; it’s a commitment that you will be involvedin projects,” she explains. “It’s not a passive club.”

Like all Rotary clubs, student clubs also participate in service projects. To better their school community, the Rotakids do recycling collections each week. They also help out with refreshments at Light Up Estero and participate in other service events including an annual food packing day with the Estero Rotary Club benefiting Interfaith Charities.

The new middle school club will allow these students to continue building their leadership and teamwork skills.

“Working to make Interact Club a success is important because it will teach kids how to be good citizens and giveback to the community,” Patricca says. 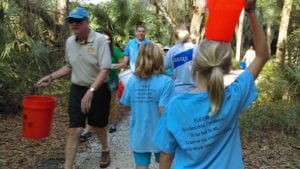 A good example of a cooperative effort of the local Rotary clubs is Walk for Water, an annual event started three years ago by Estero Rotarian Sally Smith. This educational event raises awareness of the global need for clean water and serves as a fundraiser for Rotary’s water sanitation project in Santa Eulalia, Guatemala. A date has not yet been set for the 2018 Walk for Water, but last spring’s event raised $11,000 in a joint effort of the Estero and Bonita Rotary clubs. 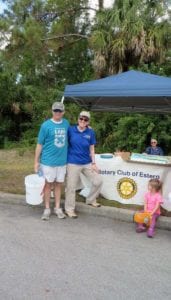 During the walk, participants start at Bonita Springs YMCA, where they are given buckets and asked to “fetch water” from the Imperial River. The distance simulates the daily “walk for water” many Guatemalan children endure.Sadly, the water those children draw is often unclean.

The local Rotary clubs are in the midst of a three-year project to bring clean drinking water and sanitary latrines to every home in Santa Eulalia. A mission trip has been organized for October 2017.

One of Rotary International’s longstanding efforts has been as a partner in the Global Polio Eradication Initiative. This cause is especially dear to Faerber’s heart. In the 1960’s, his mother was an anesthesiologist in New York’s only polio facility.

“I remember visiting my mother at the hospital and seeing lines of iron lungs with patients who couldn’t breathe on their own,” he recalls.

Today, polio has been nearly eradicated with just five new cases in the world as of June 2017.

“I enjoy Rotary — its goals and purposes of peace and eradication of polio,” says Faerber, who became a Rotarian in 1991. “I enjoy the fellowship. I like the people, and I like the fact they are doing charity work in the community.” 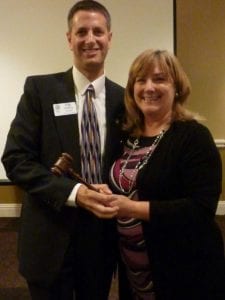