Superstardom has a tendency to corrupt. Thankfully, that’s not the case for Florida Gulf Coast University’s most prominent alumnus.

Major League Baseball pitcher Chris Sale has never forgotten the only Division 1 school to offer him a scholarship after high school, nor the community which celebrated his early success. Since being drafted by the White Sox in 2010, Sale has maintained a home in Southwest Florida and has remained a familiar face at FGCU.

Now that he’s been traded to the Boston Red Sox, Sale gets to sleep in his own bed for an additional six weeks during spring training, and Southwest Florida fans get the opportunity to see homegrown talent on display at JetBlue Park. This season, Sale will be wearing No. 41, the same number he wore at FGCU when he was named 2010 Collegiate Baseball Player of the Year.

“For those who want to see Chris pitch, this may be their best opportunity all year,” says FGCU Athletics Director Ken Kavanagh, who calls Sale “the best overall ambassador for FGCU Baseball, FGCU Athletics and the entire university.”

It’s not only Sale’s prominence as a pitcher which makes him so beloved at FGCU; it’s his heart.

“I’m impressed how he loves this community and this university,” says his college coach, Dave Tollett. “He’s never forgotten where he came from. We’re still family, and that means a lot to me as head coach, and it means a lot to the alumni.”

Sale is known to drop in randomly during the preseason to throw bullpens and chat with the current FGCU team.

“He just feels comfortable here,” Tollett says. “We love him hanging out here.”

Tollett says he doesn’t ask Sale for many favors, but when he does, “Chris never says ‘no.’” A recent example: When Tollett asked for a locker room TV, Sale showed up with two 85-inch and two 64-inch screens, plus four Playstations.

We caught up with Sale the first week of spring training, on his way to speak at a dinner for FGCU Athletics supporters. He had six-year-old son Rylan in tow, dressed smartly in an Oxford shirt and khakis. Sale’s wife, Brianne — his college sweetheart — was at home with their new baby, Brayson. The couple not only gives back to FGCU but recently joined fundraising efforts for Laces of Love, a Collier County charity which provides new shoes to needy children, including athletic shoes for playing sports.

With a growing family and ties to the Southwest Florida community, Sale says he is grateful to be staying local for spring training. An additional perk of proximity is the chance to catch some Eagles baseball action. In the past, Sale has been in Arizona for spring training and has only been able to attend one FGCU baseball game. This spring, he also hopes to cheer on the Eagles’ basketball team.

As FGCU celebrates its 20th anniversary, the young institution benefits tremendously from Sale’s success and support. He’s not only visible; he’s committed to his alma mater.

Sale’s major league success also is a boon for Tollett’s recruiting efforts: “When we bring a recruit in, they sit right under his retired jersey.”

FGCU also boasts three other former players who have made it to the Big League: Richard Bleier (New York Yankees), Jacob Barnes (Milwaukee Brewers) and Casey Coleman — now playing Triple-A with the Tampa Bay Rays but formerly in the MLB with the Cubs and Royals. Fourteen other former FGCU players are currently playing minor league baseball.

Although Sale is set to earn $12 million with the Red Sox this year, he remains approachable and genuinely interested in maintaining relationships with his FGCU family.

“I like coming out here and seeing the guys,” says Sale. “It takes me back to the good times when I was here.”

As founding coach of the Eagles’ baseball program, Tollett recognized Sale’s athleticism and potential early, but he had no idea just how good Sale would become. 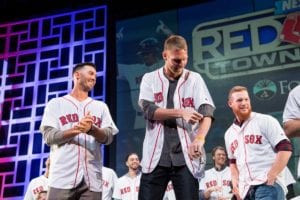 LEDYARD, CT- JANUARY 20: Recently acquired Boston Red Sox pitcher Chris Sale tries on his new jersey after it was presented to him by Rick Porcello during a town hall meeting during Winter Weekend on January 20, 2017 at Foxwoods Casino in Mashantucket, Connecticut. (Photo by Michael Ivins/Boston Red Sox)