Over the last two decades, retirees began flocking to Estero, a centrally located haven between Naples and Fort Myers with growing amenities. Initially, most were looking for gated communities with golf courses, social clubs and resort-style amenities. 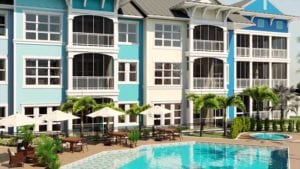 Then, they got older. Their bodies now tell them that golf and tennis days are ending. Maintenance on spacious homes with well-manicured yards and swimming pools seems overwhelming. Enter the growing market for senior living communities.

“We see a need to continue to serve seniors here in Southwest Florida,” says Kevin Ahmadi, area director of operations for Volunteers of America. VOA is soon breaking ground on Estero’s most expansive senior housing community to date.

The Colonnade of Estero will be a “life plan community,” meaning it will offer a continuum of care from independent living — with all the amenities — to full nursing care. Phase one starts with 157 apartment homes for residents who are able to live independently but value being on a vibrant campus with multiple dining options and a range of activities. Amenities at The Colonnade will include a spa, theater, bocce ball courts, a creative arts studio and more. 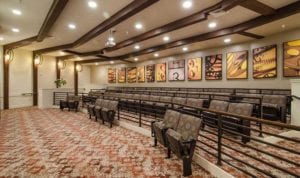 With the community’s opening still about two years out, The Colonnade already has more than 75 committed future residents. Among them are Bill and Eileen Carr, both 81 years old.

“We love Estero very much, and we want to stay here,” says Bill from his condo at Genova, which sits directly across Corkscrew Road from the land that will undergird The Colonnade. “I think the location is perfect for us to access all the things we use. My wife likes to shop at Coconut Point, I like to go down to the beach, and it’s close to our country club.”

The Carrs downsized from Shadow Wood Preserve and are enjoying the maintenance-free lifestyle of Genova while they await their ultimate home at The Colonnade. It’s the last move this couple should need to make.

The draw of a continuing care community is that residents can live in an amenity-rich community like they’re accustomed to, then later move to assisted living or memory care units with little fuss. They’re also assured of skilled nursing care and rehabilitation services as necessary. As Bill Carr puts it, “You can leapfrog from one to another while staying on the same campus.” 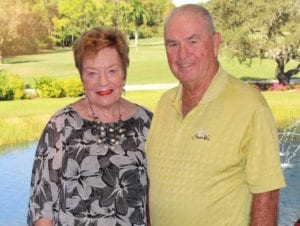 The couple felt reassured by VOA’s reputation as a nationally recognized, nonprofit provider of senior care for 125 years. Locally, VOA has operated Gulf Coast Village in Cape Coral for 30 years.

Similarly, Murat Dorkan was impressed by the reputation of American House, another Southwest Florida senior housing provider, when he began looking at options for his elderly mother. Founded in 1979 by local resident Bob Gillette, American House opened its Coconut Point community in 2016, offering independent living, assisted living and memory care in a beautiful facility that sits right next to Lee Health Coconut Point.

When The Colonnade opens, it may provide some competition for American House and other senior living communities, but that should only improve the overall quality of care in the local marketplace, says Terry Myers, executive director for American House Coconut Point. 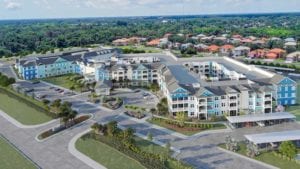 “We’re customer service based; it’s all about our residents and becoming part of their family,” she says.

American House rental pricing starts at $3,000 a month for an independent living studio apartment and can go up to well beyond $6,000 for nursing and memory care. As a life plan community, The Colonnade model is a bit different. There is a one-time entrance fee, typically six figures, and then a monthly fee based on the level of services needed. Residents who buy in are guaranteed to “age in place” through the end of life.

Dorkan, a 30-year wealth management professional who specializes in estate planning, was prepared for the hefty financial obligation. His mother has a long-term care policy, something he recommends for every retirement-aged adult, which pays her monthly fees at American House.

If people rely on Medicare benefits, their options will be limited. They typically won’t have access to retirement communities with luxury amenities like spas, bistros and putting greens. One of the better facilities accepting Medicare locally is Life Care Center of Estero, which has been serving the community for 16 years. 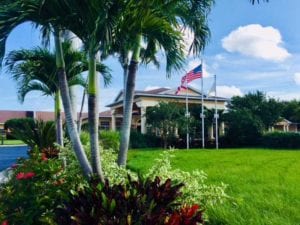 Along with nursing care, Life Care Center provides inpatient and outpatient rehabilitation services. Rather than competing, American House has, at times, partnered with Life Care Center, which can offer temporary housing and skilled nursing for American House residents as they recover from injuries or surgery.

“Our rehabilitation is overflowing with patients,” says marketing director Lisa Canning. When it opens, The Colonnade will be another local provider of skilled nursing services.

The senior community in Estero with the most targeted focus is Gull Point, which opened three years ago as Autumn Leaves of Estero and now is under new management. Gull Point of Estero exclusively serves those with Alzheimer’s and dementia and boasts a highly trained staff with several registered nurses. As a smaller facility, Gull Point is able to provide a safe environment and individualized attention, says marketing director Priscilla Valentin.

What about folks who are aging well and love their homes? For those who don’t want to move into a retirement community but want the assurance of quality, in-home care, VOA has an innovative service called Senior Choice at Home. 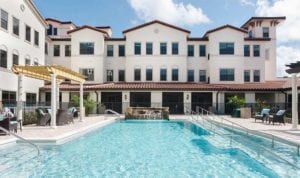 “We commit we will care for them the rest of their lives in their home, as long as they’re safe,” says Director of Marketing Andrea Sieradzki. “You don’t have to be ready to leave your home. If your home is your castle, we will come to you.”

Many Senior Choice at Home members live in gated communities where they continue to enjoy the social interaction of a country club. Senior Choice gives them help when they need it and the assurance of support from medical care navigators.

“We took the entire continuing care program and took away the bricks and sticks,” explains Ahmadi, noting it’s the only program of its kind in the state.

The landscape of senior living in Estero is growing more expansive, providing a spectrum of options. There’s now something for every personality, budget and level of care, allowing seniors to live in safety and style.