Immersion Language Education in the Heart of Estero

Greek language has had an indelible influence upon Western civilization. Helen Keller, a lifelong learner and great admirer of Hellenic culture, once wrote, “If the violin is the most perfect musical instrument, the Greek language is the violin of the human thought.” Yet, few are the places in contemporary America where Greek is taught and practiced. 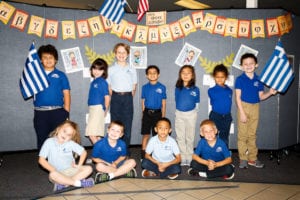 Enter Athenian Academy, the newest charter school in the Lee County school district, located in the Village of Estero at Corkscrew Village shopping center. This unique school has the ambition to raise citizens of the world by teaching an immersion curriculum in both Greek and Spanish.

The original Athenian Academy was started in Clearwater, Fla., in 2000, becoming the first Greek language immersion school in the United States. A thriving Greek community in Pinellas County made sure the school succeeded; within several years, the Academy enrolled upwards of 500 students, teaching a strong core curriculum, with emphasis on math. Every school day is divided halfway into Greek and Spanish language immersion.

Athenian Academy in Estero just finished its first semester with an enrollment of 13 students in kindergarten through second grade. The unassuming strip mall location is going to change soon.

“This is our planning year,” says School Leader Wendy Lee. “We are building our own school on Three Oaks Parkway and San Carlos Boulevard, close to the former Winn-Dixie.”

The school will spend next year in modular units and move into its new building for the 2020-2021 school year. As these changes take place, Athenian Academy is expecting to increase its enrollment to 250 students ranging from kindergarten to eighth grade; a Pre-K class is also planned for 2020.

Right now, Lee and her staff are laying the foundation for success by creating a warm, family atmosphere in the classroom and teaching the kids 30 minutes of Greek and Spanish each day, along with their regular subjects. The practice at the mother school is to invite Greek language teachers from Greece to the United States, and Athenian Academy in Estero will be doing just that in the coming years. 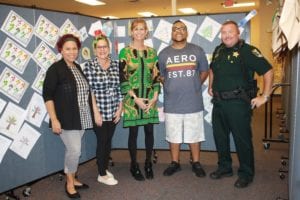 “We work closely with the Greek Embassy and provide three year visas for our teachers,” says Lee.

Before semester break, at the school’s holiday luncheon, children sang a spirited “Feliz Navidad,” changing up to “Kalla Christagenna” (“Merry Christmas” in Greek) for one refrain. Spanish Teacher Inester Guevara explains to the kids that they are singing a trilingual song.

Only 20 percent of American primary and secondary school students learn a second language, according to the Pew Research Center, compared to 92 percent of their European counterparts. Bilingualism has been found to improve verbal and spatial skills, memory, problem-solving skills, overall intelligence, testing and academic performance, reports the American Council on the Teaching of Foreign Languages. Knowing more than one language also increases self-esteem and creates positive attitudes toward other cultures.

Beth Van Kampen, mother of kindergartener Rushton, says early exposure to language drew them to Athenian Academy. Moving to Estero from a small military community, the family wanted to take advantage of the multicultural ethos of the area.

“Kids need to be exposed to another language at a young age; it makes them learn the language better and accept other cultures as a normal, everyday thing,” says Van Kampen. The small class size of the charter school also played a role in the family’s decision, she adds, as it mitigates the pressure and chaos of a larger group and focuses on learning.

Charter schools not only typically offer small class sizes but also may have more freedom of innovation. Many of them offer niche programs. According to the Florida Department of Education, enrollment in charter schools in the past 10 years has more than doubled, resulting in 295,000 students in 655 charter schools statewide. The School District of Lee County includes 24 of them, with Athenian Academy as its latest addition.

Currently, the small number of students at Athenian Academy contributes to its family ambience and unique personality.

“The dynamic here is to support each other,” says April Tom, classroom teacher, behavior specialist and a veteran of Lee County schools.

Everyone is involved with the children from the school leader to the teachers and the office manager — even the school resource officer: “Deputy Smith helps with everything. He listens to our lessons and jumps in with examples,” confirms Guevara.

Ms. Tom points to the walls covered with decorations and student work: “Everything here has a story and was done with a purpose. We try to teach manners, and recognize the importance and value of respecting everyone, including yourself.” 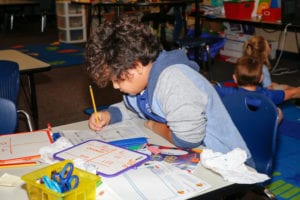 Hazel, a lively kindergartner, is actually excited about having homework every day.

“I have to learn Spanish with her, so I can keep up with the homework,” says her smiling father, Trey Miller.

Another kindergartner, Juliani, is rapidly learning to read and write both in English and Spanish. Literacy in both languages is very important to the family, says Oriana Opperman, Juliani’s mom.

Athenian Academy is just settling into Estero and looking forward to becoming a part of the community. The new building will provide more space for incoming classes. Language curriculum is adjusted so any child, regardless of grade or age, can learn it, notes Lee.

“Even if you enroll in the fifth grade without previous Greek knowledge, you can start at the beginner level,” she says.

Lee hopes to raise community awareness about the accessibility, utility and cultural importance of the school’s program. The singularity of the school, being the only language immersion charter school in Lee County, makes it uniquely positioned to attract a wide range of students. After all, being able to say “Merry Christmas” in three languages at age seven is no small feat. And that’s just the beginning of what is to come for these eager language learners.