When neighbors and strangers started flexing upon seeing Fort Myers baseball team owner Andy Kaufmann, he knew they connected with the new nickname: The Mighty Mussels. 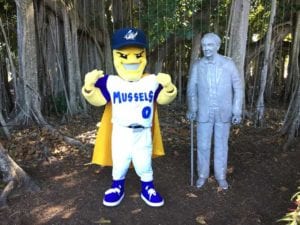 After 27 years as the Fort Myers Miracle, team officials thought it was time for a change. So when the Minnesota Twins’ Advanced Class-A affiliate in the Florida State League opens its season April 9 against the St. Lucie Mets, Sway – the team’s oversized palm tree mascot – will have a partner. It’ll be Mussel Man, who looks like he could be Mr. Clean’s brother. Big yellow arms, white smile, baseball uniform. And a cape, gotta have the cape.

“We looked at a lot of names,” Kaufmann said. “Mussel Man. It just felt natural.”

A mussel with rippling muscles reflects both the Gulf Coast sea life and the active lifestyle of the region. Team President Bob Ohrablo said he’s a traditionalist, but sports evolve and that includes changing a team’s look as well as mascot. The official team colors are those Southwest Floridians can relate to: Twins navy, gulf purple, sunset lavender, golden sun, yellow sand and sky blue.

“The Mussel Man is like a super hero,” Ohrablo said. “This is about fun. Baseball is competitive, but we want to supplement it with fun. That’s our job.” 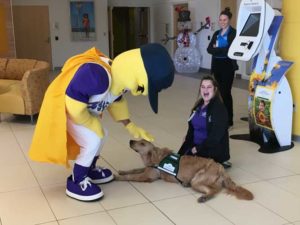 Marshall Kelner, the team’s broadcaster and media relations manager, said it’s cool to be part of something new. He’s received a lot of phone calls since the rebrand, which has generated interest.

“The name has more of a local flavor to it,” he said, pardoning the pun.

Mascots are key. According to a 2013 study published in the Journal of Marketing Management, “Brand mascots reflect a deeply rooted human tendency to understand the world through anthropomorphic objects.”

What does that mean? Humans are hard-wired to see the human side of everything. Children like mascots because they’re cartoon-like, they get into trouble, they’re friendly and they like to hug.

And if there’s one point Kaufman, Ohrablo and Kelner are all talking about, it’s the need to continue interacting with fans, particularly the younger ones. Kelner admits it might take more time for long-time fans to get used to a rebranding of their local team.

“When they see the promotions being taken to the next level, there will be a lot of excitement in the ballpark,” he assured. “There will be mussels marinara. The menu is getting a ramp up. For kids, playing off the mussel-up promotion — a flex cam.”

For years, the Fort Myers franchise has had quite the reputation in baseball for crazy promotions. It goes back to Mike Veeck, son of Hall of Famer and former Chicago White Sox owner Bill Veeck. Bill Veeck’s stunts included batting on a 3-foot-7 Eddie Gaedel, having players wear shorts and putting on “Disco Demolition Night,” an 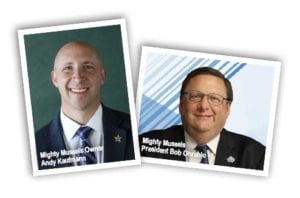 event that caused a riot at Comiskey Park.

Mike Veeck, who wrote a book, “Fun is Good,” was part owner of the Fort Myers Miracle from 1992-2014. His minority owners included actor Bill Murray and singer Jimmy Buffett.

The team has continued its promotional fun by having country and faith concerts last season, as well Harry Potter characters at its games with children receiving wands. Other characters who made appearances included Christopher McDonald (Shooter McGavin, “Happy Gilmore”), Corbin Bernsen (Roger Dorn, “Major League”), Leslie David Baker (Stanley, “The Office”) and Thomas Guiry (Smalls, “Sandlot”). There also are the annual promotions like Bark in the Park, Thirsty Thursdays, 2-For-1 Tuesday, $1 hot dogs and community giveback. Plus, there will be more fireworks — now scheduled twice a week.

“We want it to be family-oriented, new, different,” Kaufmann said. “We are spending more money to create a fun atmosphere for our fans.”

The team just came out with its 2020 promotions, so check out https://www.milb.com/fort-myers/tickets/promotions for more information.

“Our opening day weekend will be full of surprises for fans,” said Kaufmann.

Stay up-to-date on the start of Minor League Baseball and find game schedules at milb.com.