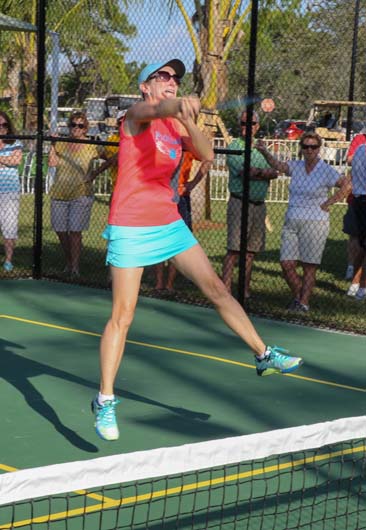 Many tennis courts in Estero’s gated communities are getting a facelift — reemerging as tennis’ popular cousin, pickleball. If you haven’t heard of this sport, you will. Pickleball is one of America’s fastest growing pastimes. It’s not only sweeping the nation, but it’s hot in Estero. Older communities are rapidly adding pickleball to their racket offerings, and new construction communities are promoting pickleball as part of their amenity packages.

Susan Ingalls, a resident of The Preserve at Corkscrew, says her community’s languishing tennis courts recently have been renovated into pickleball courts — now busy again. She first played pickleball in North Carolina and came home ready to find players in Estero. Ingalls is an advanced tennis player who is building her pickleball skills but still enjoys playing both sports.

“At first glance, the games may look similar,” says Ingalls before attempting to explain the mashup of pickleball: “The courts are smaller, and what they’re playing looks more like ping pong, except they’re standing on the ‘table’ and the rackets are bigger. They’re volleying something that looks like a whiffle ball.”

The USA Pickleball Association (USAPA) defines pickleball as a mixture of tennis, ping pong and badminton, invented by a few fathers to entertain their children.

While some pickleball players transition from tennis, many have never picked up a tennis racket. Pickleball may be played after just a few lessons, although scoring can be tricky. The score must be announced before each serve.

Proper court shoes are best. Otherwise, anyone with a paddle can play; no special uniform is required. Paddles run the gamut of prices, but novices can find inexpensive paddles sufficient to enjoy a game.
“My orthopedist said his business has picked up with the popularity of pickleball,” notes Ingalls.

According to the USAPA, NBC News declared in 2014 that pickleball was one of the fastest growing sports in the country, and its popularity has only grown since. CBS announcers were on hand for the inaugural U.S.Open Pickleball, held in Naples in 2016.

“The U.S. Open started at the East Naples Regional Park three years ago,” explains Dan McLaughlin, a gold medal tournament player from Pelican Sound. The exploding interest in pickleball led to the entire park being revamped to accommodate 50 pickleball courts, creating an environment conducive to spectators of a national competition. The 2019 U.S. Open in Naples happens this April. 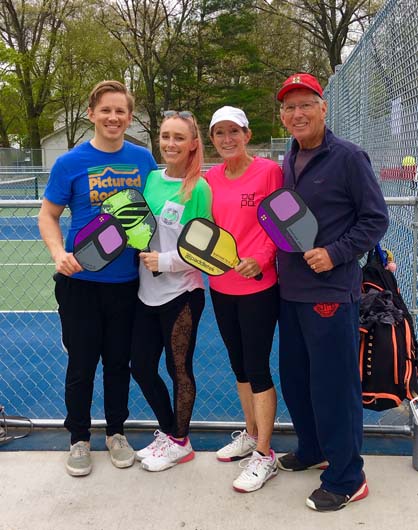 The majority of players are still over age 60, but youth are also beginning to take to the pickleball courts. McLaughlin says his entire family enjoys the sport together; his wife and adult children also take home medals.

He and his doubles partner, Nancy Robertson, a three-time U.S. Open Pickleball Champion, have advanced pickleball in Southwest Florida through advocacy and instruction. Pelican Sound has eight new pickleball courts, and McLaughlin is personally responsible — with help from friends — in training a large percentage of the community’s new players. Three years ago, Pelican Sound had just a few pickleball players but now numbers more than 800. Many place well at the U.S. Open.

While McLaughlin and his wife, Kate, still play tennis, they also travel the nation for pickleball tournaments.

Originally, pickleball players set up portable nets in parking lots, marking court lines with chalk. They can now put the chalk away.

Beaubien says volunteers provide lessons three days a week, and pickleball clinics fill up rapidly at West Bay. The game can be noisy, so playing hours have been established. It’s a game where people socialize. Players of all skill levels, ranging from novice to tournament rated, are enjoying the sport.

Many players even say pickleball is addictive. An advantage over tennis is the shorter courts, requiring less distance to run. Additionally, the court (about a third of the size of a tennis court) is shared by partners, and games are potentially shorter than tennis. However, long days of tournament play can be grueling on hard courts. 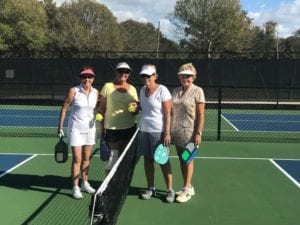 The Estero Recreation Center, where indoor pickleball courts are a gift in a rainstorm, has wooden basketball floors which are easier on the body. The Rec Center uses portable pickleball nets for its six courts. A $10 annual membership fee opens the door to anyone who wants to learn this new sport.

The game is fast, so it’s possible to show up and wait for a spot to open. Another bonus: a foursome is not needed. Players typically invite strangers to play.
Players, from ages 9 to 90, are limited only by their desire to play and their stamina to stay.

When talking local pickleball, Pelican Sound, West Bay and Bonita Bay are making noise with new facilities and programs, but many other local communities are adding courts as this game’s popularity continues to rise. 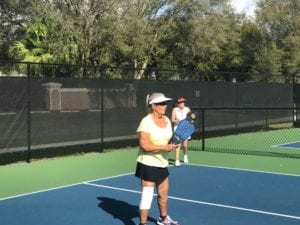 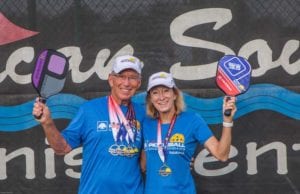