When you think of a young, classical composer, maybe Mozart comes to mind, complete with a powdered wig, gold brocade coat and an overbearing father. But contemporary classical music is being created by characters who are much more down-to-earth. Meet Paul Berlinsky: a Miami Dolphins fan, trombonist, tennis aficionado, avid gamer, Florida Gulf Coast University student, and … classical composer.

Berlinsky, 25, has an easy smile and speaks with a disarming, energetic enthusiasm. While he was learning and playing music from a young age, he didn’t start composing until two years ago. Professor Jason Bahr, of FGCU’s Bower School of Music, asked the class to compose their own pieces, and Berlinsky found a new calling. Since then, he has written a total of eight classical pieces, some of which have been performed by his fellow musicians at FGCU. 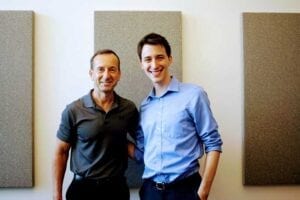 His latest, “Mountain Roads,” was staged by Dr. Timothy Yontz, head of Instrumental Studies and Director of Bands. As conductor of the Wind Orchestra, he agreed to listen to Berlinsky’s piece.

“It stayed on my computer for a while, and when I finally got to listen to it, I called Paul immediately to tell him we should perform this,” recalls Yontz.

In the beginning, however, Berlinsky admits it was a challenge to get anyone to perform his pieces. Eventually, he found classmates who were interested. “Now I’m being asked to compose stuff for them, which is a nice change,” he says with a smile.

In fact, he admits that the series’ score led him to his interest in classical music as a child. A lot of these influences can be heard in his music. The first two movements of Berlinsky’s piece Haystacks, inspired by a series of paintings by Claude Monet, create atmospheric, immersive experiences that evoke landscapes in the mind, much like John Luther Adams’ or George Crumb’s music. The third movement, End of Summer, however, has the lively, storytelling quality of flute music that would be perfectly suitable in a film.

Creating music is a private act, often inspired by the outside world, whether it’s nature, great art, political movements, or movies. Berlinsky fuses these inspirations with listening to contemporary composers and distilling the essence of what he wants to express.

“I combine all of these things, let them settle in my mind for as long as I can, and then I start writing,” he explains.

But music is a form of communication, so Paul tries to make his ideas — the moods, the stories, the feelings that run through his mind while composing — accessible to the audience. He receives help in that respect from Dr. Yontz. Performing a piece when the composer is around to give and receive input is an exciting experience for Yontz and Berlinsky alike.

“It’s a creative collaboration,” says the professor. “He received suggestions, and the piece changed along the way. He is very good at seeking and accepting feedback.” 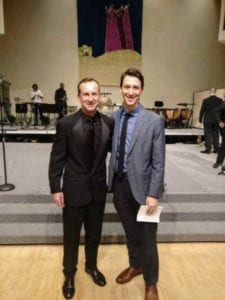 The spirit of inspired cooperation seems to pervade the faculty and students at Bower School of Music.

“We all want Paul to succeed,” says Yontz, noting that Berlinsky writes performance pieces for his fellow musicians, and in turn, they give him suggestions on how to improve his work.

Yontz is positive that the creative influence of the music faculty and students at FGCU enhances the community of Estero.

“The people who come to live here bring the love of the arts with them,” he observes. “This building, and this campus, was created by the community who wanted more music, more cultural opportunities, and a university will do that.”

FGCU is now is able to attract gifted students like Berlinsky from across the country. “This might not have been possible 10 years ago,” Yontz adds.

The lack of a large performance venue on campus is a problem that may be addressed soon (the school’s auditorium seats only 200), but until then, the larger band performances are spread around concert halls throughout Lee County, with next year’s performances slated to be at Estero High School.

As for Berlinsky, he is a senior and can’t wait to graduate this month. The school doesn’t offer a composition major, so in yet another creative stroke, Berlinsky carved out his own course of study, which he hopes to continue next year; he has already been accepted with full scholarship at four graduate schools across the country.

Meanwhile, in a much less dramatic fashion than the classical composers of old, Berlinsky tries to play tennis at least once a week, follows the Dolphins, and hangs out with his favorite person, his fiancée, Jessica. They’re planning a wedding in October.

The pride his mentors take in his work, and the unequivocal support of his peers, speaks volumes about Berlinsky’s art and personality.

“He deserves all of the successes he has had so far, and the best for him is yet to come,” says Dr. Bahr, who guided Berlinsky through composition. “I am grateful that I have had the chance to shepherd him for a while.”

A millennial composer with a classical mind, Paul Berlinsky’s view of art might be a good definition, and a guideline, for any creative process we might undertake:

“When you experience good art, you should end at a different place than where you started. It should take you somewhere else, expose you to a different mindset or thought process. Great art should transport you.”