No one wants to think about being attacked. However, crime does happen, and when it does, things can escalate very quickly. Should you be the unfortunate victim of an attack, you most definitely want to be prepared.

Stepping through the doors of Training Grounds Martial Arts Academy in Estero would be a good start. The self-defense techniques taught by the academy’s owner, Joshua Frye, are ones he’s honed for nearly two decades. Frye grew up in a single-family home in Indiana, where his mother worked as a welder and was often on the job at night. She wanted her son to be able to take care of himself, so she enrolled him in a self-defense class when he was 15 years old. Before a year had passed, he was on his way to obtaining his black belt and was teaching adults.

“They called me ‘Sir,’” beamed Frye. “Motivating people and seeing how they took to it was invigorating. I knew at that age I wanted to pass on my knowledge.”

Training Grounds is by no means your run-of-the-mill gym. It’s a place where employees and students alike are linked by a kinship of commitment to something bigger than themselves. There are no egos, Frye says. He doesn’t teach with a “you have to do it my way” mentality, and some of the fiercest fighters in the place are among the most humble. 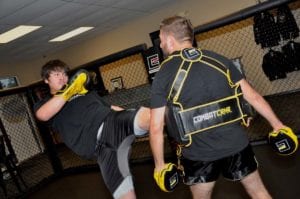 Training Grounds recently produced a pair of amateur champions at the annual International Kickboxing Federation tournament. The victories were a stamp of success on the teaching style and dedication taking place inside the walls of this Estero training academy.

Gabriel Schram was named the super lightweight champion in Muay Thai Kickboxing at the IKF event.

“I competed in the same event last year and lost; it hurt a lot,” he said. “I came right back to the gym to make myself a more dynamic fighter.”

Schram started his mixed martial arts training with Taekwondo, got his black belt in high school, then moved to Training Grounds to expand his skills.

“The culture is that everyone treats each other equally,” he noted. “Training with Josh is a lifestyle. I carry it everywhere I go.” 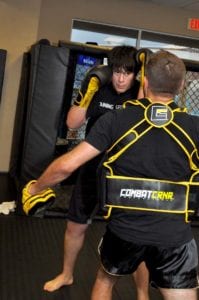 “I’m an introvert, but this win gave me a lot of confidence,” said Soleto.

Before he started learning mixed martial arts at Training Grounds, Soleto had been a student of Frye’s at Florida Southwestern State Collegiate High School, where Frye teaches math and engineering. Now in college, Soleto travels from Lakeland, Fla., every weekend to continue his training.

“When I earned my first stripe in Brazilian Jiu-Jitsu in my after-school club with Josh, I was sold on his idea of Training Grounds,” Soleto said. “It’s a great environment to be in.”

The youngest student at Training Grounds is six years old, while the oldest is a 70-year-old black belt, who routinely takes down others much younger.

“People generally come to my academy to learn self-defense,” said Frye of the introductory Krav Maga class. “Then they evolve and do things like grappling, which is extremely useful for rape prevention. We try to bring in things that relate to real life situations so people can defend themselves.” 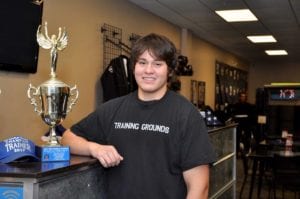 The student roster includes firefighters, S.W.A.T. members and even former military personnel. One such student is Michael Smith, a Collier County medical tactical team member who is often deployed with S.W.A.T. to handle patients whose ailments can manifest in anger and violence.

“When a patient is trying to cause you physical harm, one of the hardest things to do is gain control of them without injuring them,” explained Smith. He credits much of his skill in these scenarios to his training with Frye.

Here’s how Smith puts what he learns at Training Grounds into practice in the field: “The key is maximizing efficiency of movement. This allows me to understand where my patient may attack me, how to minimize damage and get control of them in the fastest, safest manner, thus providing safety for myself, my crew and my patients.”

What Frye particularly enjoys is seeing a stereotypical “soccer mom” enter his gym for a Sharpatz session. Protective torso gear that the Israeli Defense Force uses for training is placed on the participants. Add to that, face cage gear which allows for a limited sightline. Then the fight is on.

“They’re scared, nervous, shaking, not knowing what to expect, and overwhelmed. But when they go through the experience, they’re sweating, makeup is running down their faces, and they are thrilled with the fact that they did it,” says the congenial, yet competitive Frye.

While films like “The Karate Kid” and “Bloodsport” have inspired Frye on his life’s journey, he trains his pupils for real-life situations. 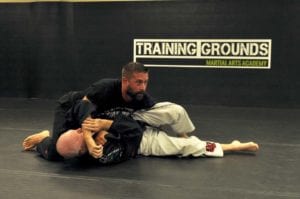 “Life’s not scripted,” he says. “It’s dynamic, not static. Sometimes it can have live-or-die consequences.”

Those words may seem a bit morbid, but know this: he’s not trying to scare you. Frye’s ultimate goal is to prepare people to defend themselves. The side benefit is a boost of confidence. And if you want to become a professional fighter in an environment filled with a unique blend of self-esteem and humility, Training Grounds might just be the perfect place for you.