+ New Faces on the Field & in the Front Office

During spring training, Minnesota Twins fans enjoy up-close encounters with star players like Joe Mauer and Brian Dozier, but come April, the experience at Hammond Stadium is all about the hometown team: the Fort Myers Miracle. As the Twins’ Class A-Advanced affiliate, Miracle Baseball has an ever-rotating roster. The goal is player development, so the best players move up on their journey to join the Big League. 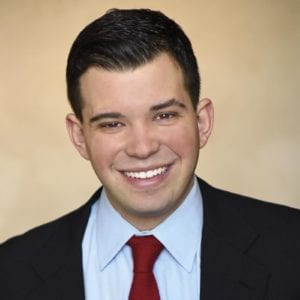 This year, the roster is not only changing on the field but also in the front office. Miracle Baseball now has a new general manager, radio announcer and field manager, among other recent staff changes. For fans, several new promotions will be bringing excitement to the ballpark this season, including five bobblehead giveaways. Local nonprofits will benefit from 50/50 raffles at every home game, and every Friday night game will conclude with the Miracle’s famous fireworks show. 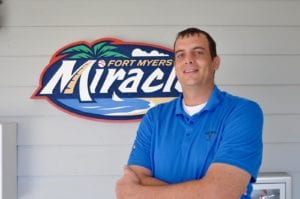 “We’re all about forming a great fan experience,” says new General Manager Chris Peters. “You don’t have to be a baseball connoisseur to have a good time at Hammond Stadium. We’ve got something for everyone.” 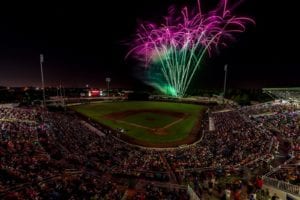 Peters is a Florida native who worked for the Miami Marlins’ AA affiliate in Jacksonville for eight years before becoming director of sales for the Marlins’ AAA affiliate in New Orleans. Earlier in his career, he had a stint in Fort Myers as the Miracle’s assistant Food and Beverage manger in 2007. Peters says he was eager to come back “home” to Florida for his new role as Miracle Baseball GM.

As a former Food and Beverage guy, Peters especially appreciates some of the new, eccentric eats at Hammond Stadium this season, including bacon-wrapped hot dogs and a pancake burger. “They’re unbelievable,” he says. 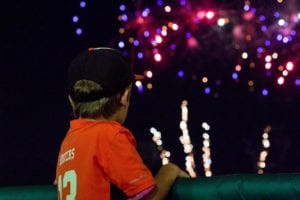 Adding excitement to the first Friday game of the season, the Miracle will give away free tickets to the April 6 game, which includes a pregame happy hour, entertainment by ZOOperstars characters and post-game fireworks. Fans can pick up vouchers at any Wendy’s location in Southwest Florida.

“We have a lot of energy here, and everybody’s excited to establish a new foundation,” adds the new Broadcast and Media Relations Manager Marshall Kelner. “We’re ready to have a very successful season with a full slate of promotions.”

Kelner is a longtime Twins fan who decided to go into broadcasting when he realized his baseball career wasn’t going to make it past high school. Growing up in Minnesota, Kelner’s first job at age 16 was ushering for the Twins in their former home at the Metrodome. His final year as an usher was the first year the Twins played at Target Field in 2010. 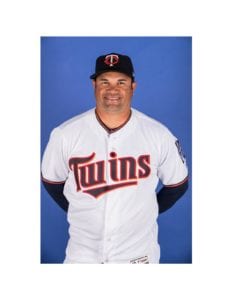 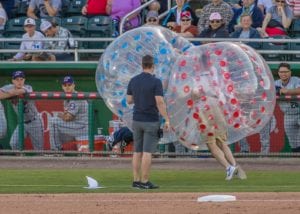 Kelner spent the last two years in California, working for the Lancaster JetHawks, the Colorado Rockies Class A-Advanced affiliate. He’s thrilled to be back with the Twins organization, serving as the stadium announcer for spring training games and as a radio announcer for the Miracle. Kelner is the new “voice of Miracle Baseball” for online podcasts which can be heard through the TuneIn Radio app. 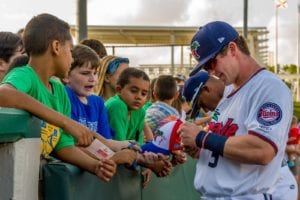 “I hope to bring the excitement of the game to the fans,” he says. “A lot of Miracle players will go on to play for the Twins or other Major League Baseball teams. It’s exciting to see that development process.”

On the field, Ramon Borrego will lead the coaching staff as the new Miracle manager. He spent the last seven years as field manager for the GCL Twins and is entering his 22nd season with the Twins 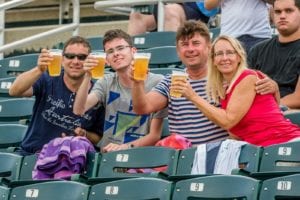 organization. The Venezuela native was originally signed by Minnesota as an undrafted free agent in 1995 and began his coaching career in 2004. Before coming to Fort Myers, Borrego was field manager for the Twins Dominican Republic Baseball Academy.

“He’s very familiar with the area and with the players, having coached the Gulf Coast Twins for the last seven years,” says Peters. “We should have a very talented bunch this year. Who knows, maybe we’ll get another championship.”