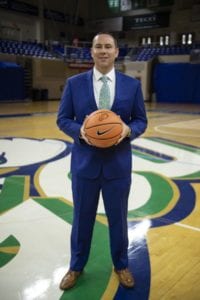 There will be a very familiar face leading the Florida Gulf Coast University basketball team this season. But he won’t be where you’ve seen him before. Think of the last player on the bench, who has to wait for his time to play. It’s been like that for this man, but now, it’s his time to play—it’s his time to fly.

Coach Michael Fly was promoted to head coach on April 5 after the departure of Joe Dooley to East Carolina. Fly’s professional career began as a video coordinator for the Florida State Seminoles back in 2008. It’s the low end of the coaching staff spectrum, but it was his start. Now, after seven seasons as an assistant coach at FGCU, Fly has more than paid his dues. As Director of Athletics Ken Kavanagh says, it’s been a lengthy audition for the role.

“We basically had a seven-year interview process,” acknowledges Coach Fly. “I had to show character, integrity, and do a lot of scouting.”

“He kept taking on a larger role progressively,” adds Kavanagh. “He had proven himself in so many different facets. I could start to envision him having the capabilities to be our next head coach.”

Now that Coach Fly is the main man, and not just an assistant anymore, he faces many new responsibilities.

“The biggest thing will be time management and commitment,” says Fly. “I used to always spend so much time on recruiting. Now, getting up every day, I have to check in with our guys, media, academics, scheduling, budget — there are so many more responsibilities.”

Oftentimes in sports, as in industry, transitioning an employee from one position to another can be a challenge. Sometimes, a fresh outside perspective is the right choice. Other times, promoting from within is the way to go. In this case, keeping things in-house was the right call, says Kavanagh.

“It’s all about fit. He continued to prove to me how he relates to our student-athletes and other key constituents,” explains Kavanagh. “I felt it was important to have a public feel with donors and recruits. I just felt all the things he had were good fits.”

Now, after recent seasons that have seen the Eagles reach multiple Atlantic Sun title tilts, advance to play in six NCAA Tournament games, dial up a 26-win campaign, and put Dunk City on the sports nation’s radar, how will Coach Fly run the team? There’s a strong pedigree at FGCU. The program has won more games in the past half-decade than any other school in the state, other than the University of Florida. Maintaining that brand is in the forefront of his mind. And even after last year’s team became the only school in the history of the ASUN (since 1978-79) to post six straight, 20-win seasons, things on the court will not be identical to last season.

“We’re going to look a lot different this year,” asserts Fly. “There won’t be a lot of sets; it’ll be fun. Guys can play more on concepts rather than taking the ball down every time to do a set play. We will play with passion and energy. I will not call as many plays as I will suggest plays. We’re going to play very aggressively on defense.”

It sounds bold. So, what are the expectations?

“He is going to have a good enough team to compete and be there in the hunt as a contender to win the conference and go back to the NCAA tournament,” says Kavanagh.

As for Coach Fly, he’s not looking to completely overhaul the tradition of this proud athletic program. But, he is looking at things not simply from a season-to-season basis.

“We want to build a strong culture for the future,” says Fly. “Do our seniors get a diploma? Are we representing the university on campus and in the community? We can build something special with long-term goals.”

“It’s heartwarming,” he says. “This hire generates excitement for all other internal assistants. Friends like to see this kind of success.”

If you’ve attended any FGCU athletic games, you’ve surely heard — and seen the hand sign for —  the motto: “Wings Up!” And with this deserving head basketball coach, it sure seems like it’s time for the Eagles to ‘fly.