A visitor enters We Rock The Spectrum Kid’s Gym and is greeted by a tiny voice.“Hi,” Zara Patel says, her brown eyes look right at him. She then smiles and extends her hand.

The 6 year old then leafs through a magazine. However, she can’t read the words. When she speaks, it’s usually one word or a short phrase.

Zara has Angelman Syndrome. If you haven’t heard of it, you’re not alone. 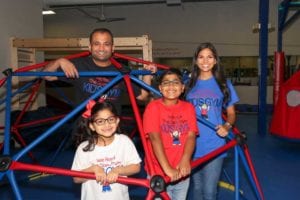 Angelman Syndrome is a neurogenetic disorder that shares symptoms and characteristics similar to those associated with other disorders including autism, cerebral palsy and Prader-Willi syndrome. Due to these similarities, misdiagnosis is prevalent, Vee said.

Vee and Ankur Patel never heard of it until February 2016. It took Vee about a year to process her daughter’s diagnosis and understand the challenges ahead. But once she reached that place, there’s been no turning back.

In November 2019, Vee opened the doors on We Rock the Spectrum, a 5,500-square-foot gym that is open to any family but is specialized to help children with neurogenetic disorders like Zara.

Vee also has poured her energies into the Angelman Syndrome Foundation, which provides family support. The mother of two now feels like she has an extended family to help guide her family on their unexpected journey.

Her goal in opening the gym was to create an environment where a supportive community could grow in Southwest Florida. 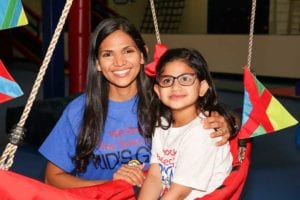 “We want to help newly diagnosed families so they don’t have to go through struggles that others parents went through,” Vee said. “What I’ve learned from parents is that if one thing doesn’t work, eventually, ‘this’ or ‘this’ will. We’re giving each other these resources.”

She’s raising awareness and funds for Angelman Syndrome Foundation, organizing a fundraising walk and sensory-friendly festival. Originally planned for May, the walk had to be rescheduled to September because of the coronavirus pandemic. Vee also had to temporarily close the gym, but it has now reopened, adhering to public health recommendations for sanitation and social distancing.

“I do use my mother instincts,” she said of her vigilance. “You know how moms seem to have eyes in the back of their heads? I feel the gym is my home, and the kids come and play safely inside.”

The Patels moved to Southwest Florida in 2014. Shortly after Zara came into the world, Vee noticed she didn’t meet her milestones – turning over, sitting up, crawling, walking. Because she couldn’t digest dairy and had acid reflux, she had a hard time gaining weight. 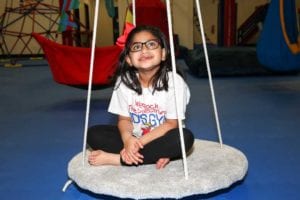 “She also wasn’t making the sounds like a normal toddler,” Vee recalled. “Children like to clap, but she couldn’t clap or make a fist.”

After testing Zara, a neurologist recommended speech, occupational and physical therapy. The toddler had low muscle tone and couldn’t put weight on her knees.

Doctors also had concerns with Zara’s eyes turning outward. Vee would find the condition to be part of Strabismus, a vision disorder in which a person cannot align both eyes simultaneously under normal conditions. Surgery helped Zara, but she still needs glasses.

A Miami geneticist took bloodwork from not only Zara but her parents, too.

“They went through every gene in our bodies,” Zee said. “They found a mutation.”

It’s part of their Indian culture to believe that “everything will work out,” Vee said. But she admits the harsh reality of the diagnosis left her “heartbroken, completely heartbroken.” 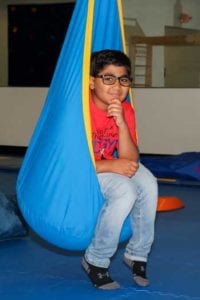 “You have dreams and hopes for your child — that they’ll be able to learn things and be independent,” Vee said. “But to have a condition where your child is prevented from doing things, your life perspective completely changes. It’s hard for her to learn skill sets. You appreciate the hard work it takes for her. You learn not to take things for granted.”

Through this journey, Vee says she’s developed such a bond with her daughter that Zara doesn’t have to say a word for Vee to know what’s going on.

“I can tell by her gestures; I can feel what she’s feeling,” Vee says.

She received encouragement and helpful advice from Katie Betz, the first mother Vee met whose child (Garrison) has Angelman Syndrome. Betz told her that most doctors, therapists and teachers haven’t heard of this disease. Keeping that in mind, she advises parents not to believe all they’re told.

“Our kids are unique individuals,” Betz said. “No neurologist can define your kid. There are different forms of the syndrome. In some ways they’re similar, but don’t let the diagnosis define your expectations.”

“She goes all the way,” Betz said. “I don’t know where she finds the time in the day. She gets a lot done, which is awesome.” 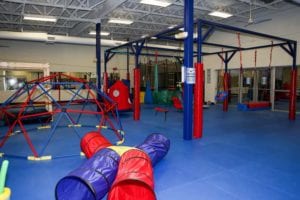 Zara is becoming more independent. She can put on her clothes and fasten her Velcro shoes. While her mom talked, Zara went and got her own juice and a snack.

She’s also learning more words, how to color and to trace her name. However, she is sensitive to smells, which makes it hard to visit other families or go to Hindu temple. Still, her mom reports, Zara has a lot of friends from school and therapy.

“You celebrate the victories,” Zee said. “I don’t see the struggles for her because she’s come so much farther than what I could imagine.”

“I’ve had moms open up to me,” she says. “They know why I opened the gym, and they feel comfortable to share with me what they’re going through, whether it’s autism or any other disorder. I give them access to resources and help give them guidance.” 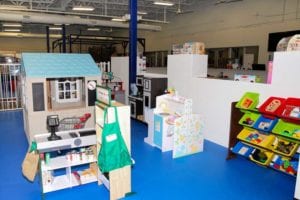 These candid conversations with other mothers confirms her purpose in opening the gym — one of about 90 We Rock the Spectrum locations nationwide.

“It has been an emotional ride, but it’s very fulfilling,” Vee said. “One of the reasons we did it is because we lacked this in the community.”

The irony, she says, is that she didn’t have clarity on where her life and passion would take her until Zara’s diagnosis. Zee now operates a therapeutic facility that serves about 500 local families.

“It’s family inclusive,” she said. “This is my passion. It’s an indoor playground. The children are from six months to 12 years. We have a lot of toddlers. We have birthday parties, classes and areas where the whole family can play.

“I’m on top of the moon,” Vee declares. “We can do everything through this gym.”

About the Event: Walk for Angelman Syndrome will be from 9-11 a.m., followed by a sensory-friendly festival from 11 a.m. to 3 p.m. It’ll feature a variety of great, local food trucks and craft beers. There will be music, dancing, face painting and other fun activities from local businesses. Proceeds benefit the Angelman Syndrome Foundation.