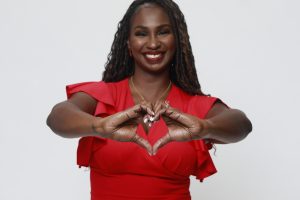 Would you know if you were having a heart attack? Two Southwest Florida women, with two harrowing stories of survival, deliver one important message.

At age 31, Kisha Stewart suddenly suffered a “widow-maker” heart attack two weeks after the birth of her child. At age 25, Brittany Thornton experienced “broken heart syndrome” leading to a heart transplant. Both were athletic and unsuspecting.

Stewart and Thornton now share their stories as advocates for the American Heart Association (AHA) which has a regional office in Estero.

‘This is Not a Panic Attack’

Ten years ago, Kisha Stewart had just given birth to her son. She was an athlete and had been a dancer for 17 years. What started as a dinner party with her husband and friends in October 2011 turned into a fight for her life and for her voice to be heard.

At dinner, Stewart began feeling what she described as “brain fog.” She was disoriented and having difficulty paying attention. She also felt extreme fatigue, which she attributed to being sleep deprived with a two-week old. Suddenly, she had a sharp pain in her chest that took her breath away, then it felt like her chest was being crushed and pain shot into her back and up into her jaw and neck. She also experienced nausea and tingling and numbing of her left arm. She knew something was really wrong.

As her husband drove her to the hospital, she began vomiting. Upon arrival, the intensity of the pain in her chest was unbearable as she tried to communicate her symptoms and catch her breath. The triage nurse asked what she was doing prior to the incident and dismissed Stewart’s experience as anxiety from being away from her son for the first time. She was told her two EKGs were “inconclusive.” But Kisha knew this was much more than a panic attack.

“You just feel like you’re being completely crushed from the front to the back,” Stewart said. “I was very adamant about repeating my symptoms and letting them know, ‘No, this isn’t anxiety, this isn’t panic.”

Thankfully, a more senior nurse walked by, gave one look at her and said, “This woman is having a heart attack—she needs to get to the back now!”

Stewart couldn’t believe what she was hearing, and the myriad symptoms started to make sense. Looking back, in the days leading up to this event, Stewart’s husband recalled her saying that her heart was racing, but it eventually subsided.

After Stewart was finally admitted to the hospital and administered nitroglycerin and morphine, the pain was still immense. It was an hour into her ordeal, and Kisha began to come to terms with the reality that she was going to die.

“There is a weird calmness that takes over you when you’ve accepted that it’s the end, that this is it,” she said. “I turned to my husband and told him to make sure our son knows how much I loved him and how much I wanted him.”

Stewart was transferred to a heart hospital and rushed into surgery, where she received a catheter and stent. Her symptoms were immediately alleviated. In recovery, the cardiologist explained to Stewart that she had a SCAD, a Spontaneous Coronary Artery Dissection, which means an artery in her heart tore, causing a blockage. It’s known as a “widow maker” heart attack because only one in four victims survive.

Since Stewart had no family history of heart disease and led a healthy lifestyle, her doctors believed the SCAD was related to postpartum hormonal changes. An alarming fact is that heart disease is the No. 1 killer of new mothers. Many of these deaths are preventable with better prenatal and postnatal care, and the risk remains three–to–four times higher for black women than white women at all levels of income or education, according to Harvard Medical School.

“Unfortunately, it is pretty common for a young woman who may be having cardiovascular symptoms to be seen in a light where it shows them to be perhaps anxious or depressed rather than what they’re truly experiencing,” said Dr. Shona Velamakanni, a cardiologist with the NCH Heart Institute.

In the days, weeks and months following Stewart’s ordeal, she developed extreme depression and agoraphobia due to fear of a recurrence. She wasn’t able to hold her newborn son. In time, she learned to lean on her husband and family for support and found healthy ways to cope through writing, music and research.

Perhaps most importantly, she learned to step back and acknowledge the importance of her own health.

“They say on a plane, you have to put your mask on before you put someone else’s on; now I thoroughly live by that,” she said. “I have to take care of myself, so that way, I can take care of everyone else.”

That is the message she brought to the “Go Red for Women” event at The Club at Grandezza on April 19. This year’s theme, “Reclaim Your Rhythm,” focusing on maternal heart health, is fitting for Stewart, who has fought hard to reclaim her own rhythm… and life.

She eloquently relayed her message of perseverance, trusting your gut when something feels wrong, and taking steps to be the healthiest version of yourself. Her advice? Know your numbers (blood pressure, heart rate, cholesterol and more), talk to your family about health history, and visit your doctor regularly.

‘You Know Your Body’

Brittany Thornton, a young 25-year-old dancer in her third season with the NBA, had the world at her feet. She had just finished a master’s degree and was working full-time in commercial real estate in Raleigh, NC. During halftime of a Charlotte Hornets Thanksgiving game in 2019, her boyfriend proposed on center court, and the video went viral. The couple later broke up under extremely stressful terms, including private investigators and a lawsuit, which led to a health crisis for Thornton. 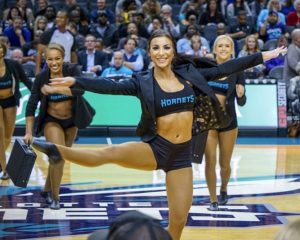 Brittany Thornton dancing for the Hornets

She was first diagnosed with the flu, but over many months, she kept getting sicker. She told her doctor early on that she was plagued by a constant “fight or flight” feeling and had difficulty sleeping. Her doctor told her she was “too young” to be so stressed.

Being young and healthy, she did not pay much heed to the eventual symptoms of chest pressure, palpitations, weakness and vomiting. By the time she sought emergency medical care, her heart was distressed beyond repair, and she had gone into complete organ failure.

“They saw that my heart’s functionality was 15 percent and it had enlarged to twice the size,” Thornton said.

The events of her breakup caused stress hormones to attack her heart, and she ultimately went into advanced heart failure, or stress cardiomyopathy. The condition is commonly referred to as “broken heart syndrome.”

She was put on the list for a transplant at Duke University Hospital. While waiting for her transplant, an external device pumped her heart until she could get a new one. Six weeks later, Thornton had a 10-hour operation to replace her failing heart.

“The left ventricle had swelled so much, it was basically like a rubber band. It couldn’t beat once it’s stretched out; it couldn’t go back to its natural form,” she said.

Brittany’s recovery was a year-long process, with constant monitoring for potential organ rejection involving heart catheters and biopsies. For the rest of her life, Brittany will be subject to a regimen of 40 pills per day to maintain her heart health, and she will remain severely immunocompromised.

She copes with her life-changing diagnosis through journaling, careful exercising, and working in real estate as a new resident of Bonita Springs. She recently attended the 41st Southwest Florida Heart Ball at the Hyatt Coconut Point in Estero as a survivor and special guest.

Thornton gives this advice: Don’t dismiss the idea that stress can kill you, and don’t let someone else tell you how you’re feeling.

“You know your body better than anyone else,” she said. “If you feel a certain way, then there’s probably something to it.” 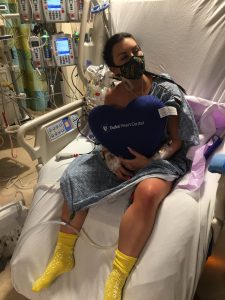 Brittany Thornton in the hospital

Raising Awareness to Save Lives

The local chapter of the American Heart Association works tirelessly to bring heart health awareness to the forefront. So far this calendar year, the AHA has raised nearly $700,000 from the Go Red for Women luncheon and the Heart Ball, both hosted in Estero. The organization is supported by many Estero communities and individuals throughout the remainder of the year with Heart Walks in Lee and Collier counties.

“For nearly 100 years, the American Heart Association has been supporting research, education and outreach to improve the lives of people all over the world, no matter their zip code, race or socioeconomic situation,” said Kelly Glewa, executive director of the local chapter. “In Southwest Florida, we’re doing that now, working with local companies and organizations to raise money and awareness about the dangers of heart disease and stroke. From providing fresh produce for after–school programs to getting blood pressure cuffs in the hands of men and women who need to track their own risk at home, we’re working alongside many in our community to ensure every person facing the reality of heart disease and stroke has access to support.”

For those who would like to join in efforts to save lives, there are a number of ways to get involved. People can create Heart Walk teams or community events to help spread awareness and raise money for the AHA. There are also direct volunteer opportunities. Email SWFL@heart.org to learn more or receive support. 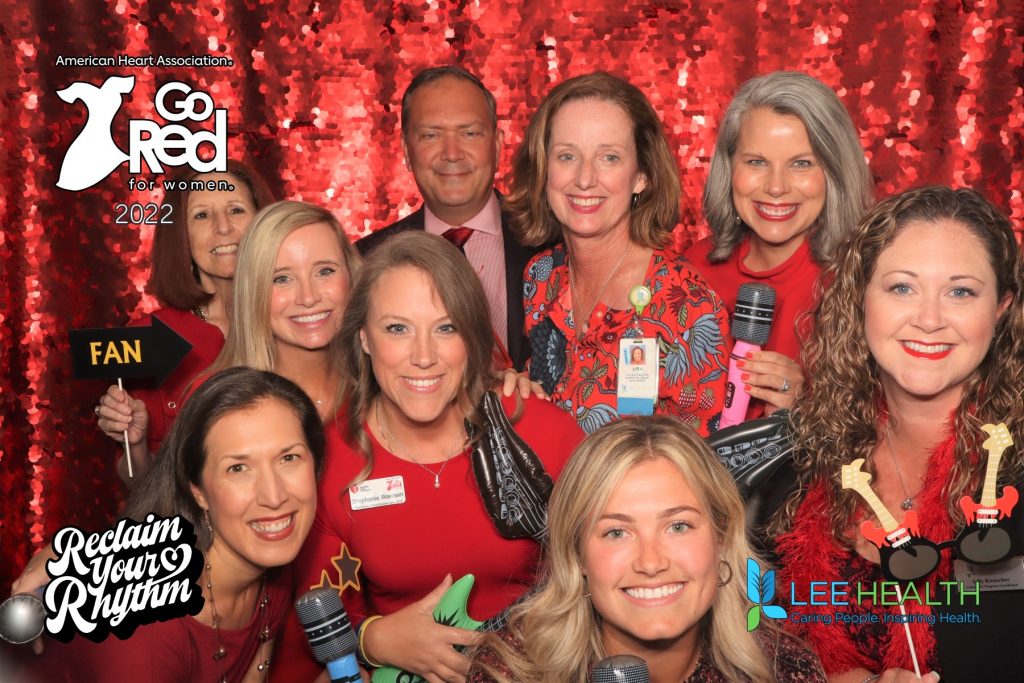