To celebrate Valentine’s Day, we asked some of Estero’s most enduring lovebirds to share their stories of falling in love – and their secrets to maintaining ardor for one another through decades of marriage. Enjoy their tales of accidental dates, weathering tough times, and ﬁnding humor through life’s journey together.

Joe and Joni Pavich will be celebrating their 40th anniversary this year. They raised two boys while building a successful real estate business in Estero. Both sons, Joe, Jr., and Jason are now Realtors in the family business. Joe Sr. and Joni consider their sons’ wives as their “daughters-in-love” and have been blessed with ﬁ ve grandchildren. “Our lives revolve around our family,” Joni says. “They are our greatest gifts of all!” 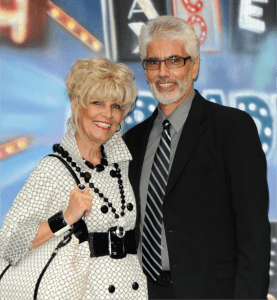 Two Chicago girlfriends from the high school reunite: one has a daughter, one has a son…
Joni: Our moms were friends during their high school years. We went to a wedding with our parents and met there.
Joe: Joni chased me all night long! …OK, Joni’s version is the “truth.” I was only 13 years old, and boys had cooties!
Joni: The cooties very quickly disappeared when we started dating two years later.

Joni: Joe’s need for speed started at a young age. Our ﬁrst date – January 11, 1969 – involved us in a drag race. I wasn’t even allowed in a car with a boy! The more he tried to impress me, the more scared I became. Two weeks later, we were going steady and still are! We were married on June 9, 1973. Over 500 guests attended, and our traditional Croatian/Italian wedding lasted for two days. We proceeded on our honeymoon to San Francisco, Los Angeles, and Las Vegas. We were too young to gamble, so we walked around the casinos. But, in the end, we were lucky in love!

Joe: We’ve been married 40 years in June, and we’ve never had a ﬁght…that I’ve won!

Sean James is a retired executive and an Estero Fire Commissioner. He and his wife, Catherine, made multiple moves while raising two boys, before retiring to Florida in 2003. One of their sons recently told them he knew no other couple married as long as his parents who were still as much in love as they are. This they consider the ultimate compliment.

Sean: We were both born in Ireland and emigrated to New York City within six months of each other. We met at a dance. Our lives were very hectic. I was attending college full time and working a full-time plus a part-time job. Catherine was also attending school and working. Our dates usually started with attendance at a 2:30 a.m. Mass after I ﬁnished my part -time job. Mass was followed by breakfast at an all-night restaurant, and this was often followed by long talks, often sitting on the curb until sunrise, discussing life, family, values, and faith.

Catherine: Early in our marriage, I established Friday night as “Date Night.” This might include eating out, a movie or a show, but more frequently, it simply involved setting up the end of the dining room table, lighting the candles, having a simple dinner and spending three or four hours just being together.
Sean: We really enjoy doing things together, whether it projects around the home, playing tennis or golf, or traveling. We particularly like road trips together, since there are no interruptions on our time. We also work together on a number of church outreach ministries.

Wilson Bradshaw is President of Florida Gulf Coast University, while Jo Anna is Chairperson of the Harry Chapin Food Bank Board of Directors. They raised three sons and have one grandson, plus four cats (three of which are female, to make up for all the boys in the family). They celebrated two decades of marriage on Sept. 9, 2012.

Jo Anna: We met on the Tri-Rail train on the east coast of Florida in 1990. Brad rode it from Miami to Boca Raton, and I took it from Pompano Beach to Boca Raton. He was a dean at FAU, and I was a VP at a local bank. We actually didn’t date but only saw each other on the train ﬁve days a week – for two years. Brad moved to Georgia to become vice president for research and dean of graduate studies at Georgia Southern University. He came back for the inauguration of the new president at FAU, and we went to dinner that night. Other friends from “the train” were supposed to join us but didn’t.
Brad: In retrospect, obvious set-up.
Jo Anna: I guess that was the ﬁrst date, though not planned.

Jo Anna: Brad thinks he’s witty, but I think he’s corny.
Brad: I know I love to laugh and make others laugh as well.
Jo Anna: He has a great sense of humor and is quick with the one-liners. The most humorous moments are when he tells a joke and can’t stop laughing at it while he’s telling it. The joke isn’t as funny as his laugh, and you can’t help but be drawn into laughter as well.

WHY OUR MARRIAGE WORKS

Jo Anna: Brad is a very kind and giving person, and he supports me in my role as a community volunteer in helping those experiencing food insecurity. I can’t imagine our marriage would work if he didn’t have a good sense of humor and a whole lot of patience.
Brad: Jo Anna is a driven, independent, passionate and giving person. Over the years, we have come to know each other, and we continue that process. I am looking so much forward to the rest of lives together. Love conquers all.

Don Newberry was born and raised in Estero and met his future wife when he was just 9 years old. They raised ﬁve children together and now have 11 grandchildren and ﬁve great grandchildren, with another on the way.

Don: The ﬁrst time I met her, she was 16 and married. My brother and her ﬁrst husband were friends. My brother went to work on their car, and I went with him. She comes bouncing out of the house wearing a red sweater and green slacks, with long, blonde hair all the way down her back. At 9 years old, I had never thought of a girl being beautiful before. But ever since then, when I thought in my mind what an angel would look like, she would always come to mind.

Over the next decade, Sis had four children and Don got married, having one son. They both divorced, reconnecting when Don’s brother asked him to help Sis move back to Estero. After that, Don frequently would see Sis when he picked up his son after work from his sister-in-law, who was friends with Sis. One day, Don and Sis started talking about movies and decided to see “Jaws” together. Shortly thereafter, Sis was out teaching her daughter to drive, when they spotted Don working in his yard on See See Street. It was his birthday, and Sis’ daughter asked if she could bring a cake over later that evening.
Don: Best cake I ever had in my life. Her kids got along so well with mine. Our dating most of the time included the kids.
Sis: I wasn’t looking, but I’m sure glad I found him. I didn’t want to get married. He kept telling me, “I’m in love with you, and I want to make a family.”

On Christmas Eve 2011, Sis suffered a heart attack. A month later, she had a second heart attack, requiring surgery and a lengthy hospital stay. Don slept beside her bed in a recliner. When a nurse asked why he didn’t use the mercy bed on the other side of the room, he replied, “It’s too far away.”
Sis: It’s a matter of just wanting to be with that person. We had to work together to survive with ﬁve kids. We had nothing except each other. We’re very blessed.
Don: We have our disagreements, but when we do, we can work them out. I just feel we’re soul mates.