As a kid, Logan Roe revered the Florida Everblades players, spellbound by the fast action of their gameplay at Germain Arena. He slipped on his first Everblades uniform as an eight-year-old “mite” with the Junior Everblades Hockey Association and loved that he looked like the pros. 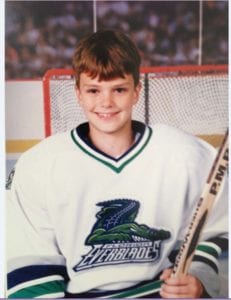 Today, Roe is one of the “real” hockey players that the mites, squirts and peewees are looking up to. The Estero resident is closing out his second season as an Everblades defenseman.

He is the second Everblades player to come through the Junior Everblades youth development program and land back at Germain as a professional hockey player. Bobby Preece, who is a few years older than Roe, ended his hockey career with the Everblades, while Roe is just beginning.

Other notable Junior Everblades alumni include Jacob Chychrun, who plays for the NHL’s Arizona Coyotes, and Brian Ferlin, who plays for the Providence Bruins, the Boston Bruins’ AHL affiliate. Several college-aged alumni are graduating this year with prospects to play professional hockey, including Austin Cangelosi of Boston College and Mario Puskarich of the University of Vermont. 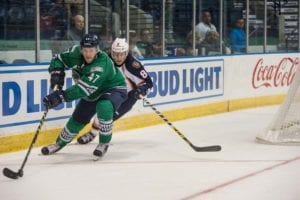 When Karl Masnjak, Germain Arena’s Director of Recreational Facilities and Programs, started the Junior Everblades program in 1998, he wasn’t sure ice hockey could compete with the dominant Florida youth sports of football, baseball and soccer. Now the Junior Everblades Hockey Association has more than 140 participants, from mite (8 and under) to junior level (ages 16-21).

“It’s amazing what the growth has been,” says Masnjak, noting the Florida Jr. Blades’ recent conference championship. “We are the premier program in the state. NHL general managers and NHL clubs are starting to recognize the amount of talent coming out of the state of Florida.”

Everblades coaches kept their eyes on Roe after he left Florida to attend and play for Kent School, a Connecticut prep school, followed by four years at Canisius College, a NCAA Division I school in Buffalo, NY. 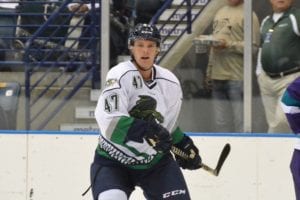 “He’s an intelligent hockey kid,” says Tad O’Had, associate head coach for the Everblades. “Last year, he was a really pleasant surprise in our D-line. He’s really developed into a solid defenseman.”

In his rookie season, Roe was called up to play in the AHL with the Springfield Falcons, making three appearances last spring. He’s been back on the blue line at Germain Arena with the Everblades this season. His dad and grandparents attend every game.

As a kid, Roe dabbled in several sports. He started with roller hockey before hitting the ice.

“Hockey is a fast sport so it was fun,” he says. “From that early age, I fell in love with the sport.” 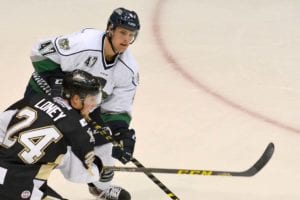 Now he’s one of the pros, proudly wearing the Florida Everblades uniform and playing at his hometown arena as the squirts and mites watch.

“It’s pretty surreal,” says Roe. “I’m trying to do my best to not let the little guys down.”

Since Roe lives locally, he often represents the Everblades at community events and youth hockey camps.

“He continually helps the team out in the community in the off-season,” O’Had says. “He’s a top character kid, on and off the ice.”