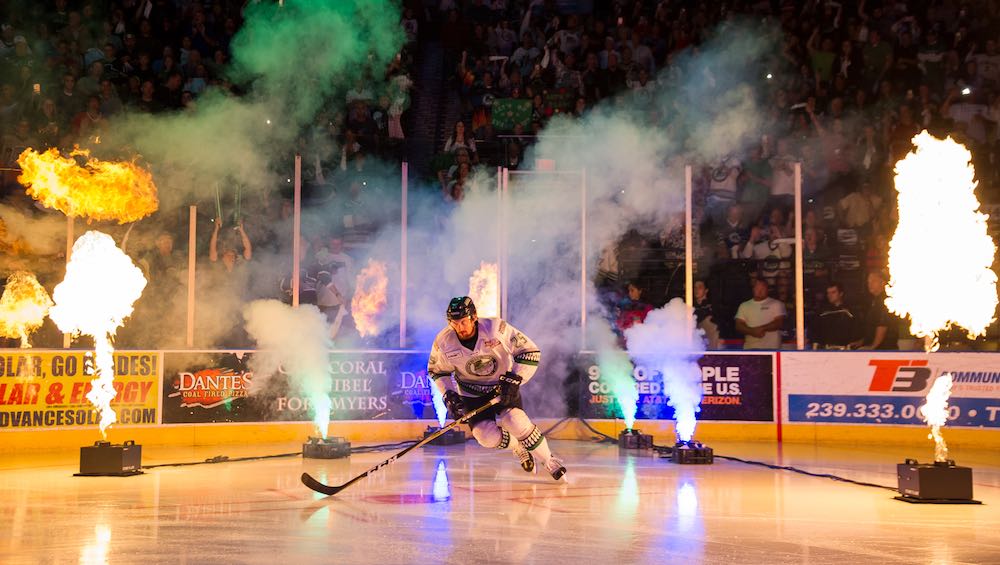 When you look at the media guide or the names on the back of the Everblades jerseys, you may not recognize most of them. Player movement at this level of ice hockey is the norm. However, you’ll be pleased to know one of the squad’s stalwarts will be back on the ice this season. John McCarron, the 26-year-old scoring machine, is ready to go again.

While last season’s heartbreaking conclusion (losing the championship game) was brutally tough to handle, McCarron has pressed on. He says if the Blades don’t hoist the Kelly Cup this year, it won’t be a successful campaign.

“It was definitely sad, tough, and hard to describe,” recalls McCarron. “We felt like were robbed a bit, but we have an incredible group of guys. About 30 minutes after it was over, we reflected on the accomplishments we had. We wanted to embrace the moment and cherish what we did last year.”

Everblades Head Coach Brad Ralph weighs in on the forward-thinking tone that McCarron took. “A couple days after game seven, McCarron passed a team doctor in the hallway and said, ‘We’ll just have to get it done next year.’ That was his way of easing the minds of everyone.”

Ralph adds that he sees the intangibles of leadership in McCarron, a powerful and skilled forward. “We’ll rely on his leadership to help coaches and new players to get on board and raise that Kelly Cup.”

Leadership was a trait instilled in McCarron at an early age. Growing up in Macomb, Mich., he was a die-hard Red Wings fan.

He wouldn’t just watch one of hockey’s all-time greats in Steve Yzerman, but he studied how “Stevie Y” led and lifted his teammates up, and how he gave big in the community.

Now, you wouldn’t think of it when you look at his 6-foot3, 220-pound athletic frame, but McCarron emphasizes that he’s really easy-going and a bit of a geek.

“I was a 4.0 student at Cornell, and I want to go into wealth management when hockey is done,” chuckles McCarron.

Despite the mantra of being a tough guy on the ice, he’s been called a big teddy bear off it. In his second season with the Everblades, he put up some extremely impressive statistics. His 29 goals led the team, and he posted a careerhigh 63 points. This was following a season in which he was named to the ECHL All-Star team.

“He’s such a fun guy to call games for,” says Alex Reed, the Blades broadcaster from 2011-2018. “He keeps fans in the game. When John’s on his shift, I know I have to be ready. There’s a good chance I’ll be belting out a goal call.”

Keeping the Blades faithful in the game isn’t hard to do, according to McCarron.

As he puts it, “It’s an incredible crowd at Germain Arena, very knowledgeable about hockey. They’re very supportive in the community. I saw a stat during the NHL playoffs that Southwest Florida was the No. 2 rated market for watching hockey.”

McCarron says he’ll lead by example this season, and it should come pretty naturally to him. He was a two-year captain in college. “Helping guys overcome life issues, getting them the ice time they think they deserve —that’s part of the success a leader can have,” he explains.

Coach Ralph says leading by example is intrinsic in his star forward. “John internally motivates himself, and that’s why he’s been so successful.

“He has a lot of dedication and loyalty to the team,” Ralph adds. “The emotion he plays with…he’s driven. He’s the kind of guy who wants to win, to be successful, to have his teammates all on board.”

Perhaps the most poignant message Coach Ralph delivers about McCarron is this: “He’s intelligent. He’s sociable. In this business, where there’s a lot of player movement to other teams, to have a guy who’s the face and the heart and soul of this team…it’s a big reason why he’s so well loved by our fan base.”

It’s quite evident to see what McCarron can do on the ice using his size and strength to find his way into the right position to deposit pucks into the opposing goalie’s net but he’s also dedicated to the local fan base and to serving the Southwest Florida community.

“We’ve done hospital and school visits,” he says passionately about team outreach efforts. “It puts life into perspective. Some of these kids are missing a limb, have cerebral palsy or cancer, but they live their lives to the fullest.”

Fans will soon become versed with some new faces on the Everblades team, but there is undoubtedly one familiar face we know we can count on, whether it’s lighting the lamp or lighting up faces in Southwest Florida with his leadership and altruism.

“There are some guys that stick out in your mind, and he’s one of them,” says Reed, who admires McCarron’s heart, both on and off the ice. “He’s one of the good guys who will do anything for you, the team, the community. Those are the kind of players we like to have here, high character players.”

With McCarron’s leadership and the talents of other new and returning Everblades players this season…Let’s drop the puck and raise the Cup!