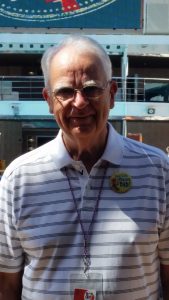 Long before others had the vision, Larry Newell could foresee the benefits of Estero becoming its own city. He formed a group of incorporation advocates operating under the name “Save Estero” way back in 2003. It would take another decade before the movement really gained traction among Estero leaders.

Newell passed away on May 20, 2022, at age 88, after a long illness. The Village of Estero and its citizens owe much to this visionary advocate.

Newell was known for his fearlessness and persistence, said Joe Pavich, another longtime Estero resident and community advocate.

“He would sit in front of anyone who would listen to him about cityhood,” Pavich said. “He was a very strong–willed man with the vocabulary of a Rhodes Scholar.”

For Newell, the most compelling reason to form a city was local control of future development. A resident of Fountain Lakes, he feared U.S. 41 becoming a car dealer row. He also wanted to bring a hospital to South Lee County and spent countless hours trying to make a case for the tremendous need for better healthcare services in the Estero area.

When a five-year moratorium on annexation expired and Bonita Springs launched an effort to annex all of Estero up to Williams Road (including Coconut Point, The Brooks and the Hyatt Regency Resort and Spa), Newell found his moment. The Estero Council of Community Leaders, the Estero Chamber of Commerce and other groups were finally coming alongside his decade-long effort.

In November 2014, the residents of Estero overwhelmingly voted in favor of cityhood. Lee Health opened its cutting-edge Coconut Point health campus in December 2018. Lawrence H. Newell has certainly left his mark on Estero.

Before retiring to Estero, Newell was the founder and executive director of the American Association for Comprehensive Health Planning (AACRP), a national health organization in the Washington, D.C. area. After that, he was the director of a health system agency in Peoria, Ill.

Born in Dayton, Ohio, the son of Dr. T.E. Newell and Virginia Newell, he served in the U.S. Navy during the Korean war, then graduated from Ohio State University. Later, he received his master’s degree in public health from the University of California, Berkeley.

While he enjoyed boating, Larry made time to be active in many community organizations. He is survived by his loving wife of 65 years, Sharon, daughter Kimberly, and son John.