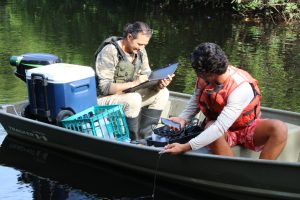 The Water School at Florida Gulf Coast University will soon have its home in a brand-new academic building opening this spring. However, the program for environmental studies and marine science students has already made big impacts in the Estero community.

“The whole idea of the collaboration between the Village and The Water School is that we have a living laboratory,” explained Village Manager Steve Sarkozy. “We can connect the students with real–life work, even if it’s simplistic monitoring and lab analysis.”

“FGCU came in and did a big study, and they documented high levels of bacteria and where it’s coming from,” he explained. 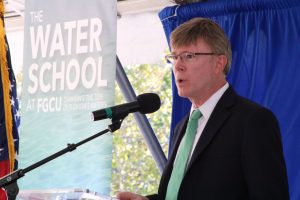 The study, led by FGCU Professor Donald Duke, concluded that the high pollution counts in some areas of the Estero River could be from aging septic systems in neighborhoods near the river. Now, the Village has started a septic–to–sewer project which will involve transitioning 12 Estero neighborhoods to sewer systems, including two mobile home communities on the Estero River west of Koreshan State Park. Four communities identified as the biggest contributors to the septic issue will have new sewage systems by the end of 2022.

“We do this sort of work because it is interesting, but it also has that impact,” Duke said. “We can help cities take action to protect the environment.”

This study is just the beginning of long-term impacts Duke envisions for The Water School as it helps with improving water quality in Estero and other Florida communities.

“The Village has been very proactive and is pushing really hard for this,” Shinouskis said. “I don’t know if it will fix all the problems, but it will fix a big part.” 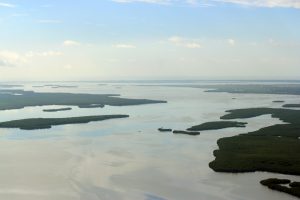 The Estero Council of Community Leaders (ECCL), a non-partisan, issues-based advocacy organization, has made water quality one of its top priorities and is helping educate residents on the septic-to-sewer initiative.

“We’re working with communities to get them to support the initiative and understand why it’s important to their quality of life,” said Nancy O’Malley, chairman of the ECCL Environmental Committee.

Although The Water School and the Village of Estero are not currently contracted for a specific project, the members of the FGCU program are still hard at work educating locals of all ages on how to keep Southwest Florida waterways clean.

“The faculty and students participate in events because we want to help our region, not because The Water School pays us to do it,” Duke said. “When events come along, we encourage the students to participate, and faculty is also there to answer questions. It’s our passion to make the world a better place.”

The Water School has also taken a lead role in getting younger students interested in science and having them gain a passion for Southwest Florida waters.

“We are currently working with a lot of K-12 schools in the region to enhance the types of content being taught, but to also create opportunities for outside–the–classroom adventures and learning science by being a scientist,” said Greg Tolley, executive director of The Water School.

“If we wait until high school age to start getting kids interested in science, we’ve waited too late.”

The Water School is continuing to get support not only from the Village of Estero, but also from residential communities such as Pelican Sound Golf and River Club. Pelican Sound’s Watercraft and River Committee works year-round to educate its members on boating safety and water quality issues.

“We’ve become a focal point as far as activism with the Estero River,” said Committee Chair Marc Goldstein. “We’re the first community of this size here that literally gets hit with everything downstream.” 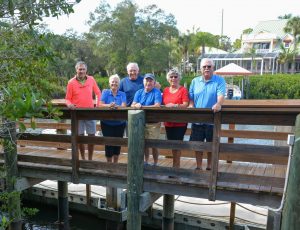 Last year, members of Pelican Sound’s committee volunteered to assist The Water School in a study to measure the Estero River’s tide at different times of day to see how much movement occurs.

“One of the times to measure was pretty early in the morning, and people just stepped up to help,” said member and former chair Janet O’Hara. “We had a waiting list—it was great.”

Goldstein views The Water School as a potential leader to help align the work of many local organizations concerned about water.

“There are probably seven or eight different agencies that actually are trying to do something in the Estero River,” Goldstein said. “The Water School could be the guiding light. We are so happy it got started because the youth have tons of energy.”

The ECCL strongly supports what The Water School is doing for Estero, particularly as the program draws young scientists into the community.

“Involving young people is really what changes the world,” O’Malley said. “Environmental education is really how we build a society going forward that will support these issues.”

As The Water School continues to make waves in improving water quality throughout Southwest Florida, Tolley wants the community to see the FGCU program as a resource for any questions or concerns regarding water. 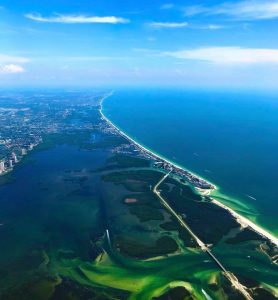 “The more we learn about how to best manage these systems and offer advice to communities, the better it gets for everybody,” Tolley explained. “I hope we can be a place where people say, ‘Hey, we have a water quality problem, let’s call The Water School.’ We want to be known as that.”

Learn more about The Water School at fgcu.edu/thewaterschool or call (239)745-4625 with questions.