Ice hockey in Southwest Florida? The question was typically accompanied by a look of suspicion. Could a minor league hockey team really take off in the middle of the subtropics? Craig Brush was determined the answer was “yes!”

It was 1998. Brush had left Detroit and a career in insurance to open an ice hockey arena along Interstate 75 in a rural area known as Estero. Florida Gulf Coast University had just welcomed its first students, Miromar Outlets was under construction, and the airport was a small, regional operation. There were no businesses or major residential communities to speak of along Corkscrew Road, save Wildcat Run; Coconut Point Mall was still a few years from opening. 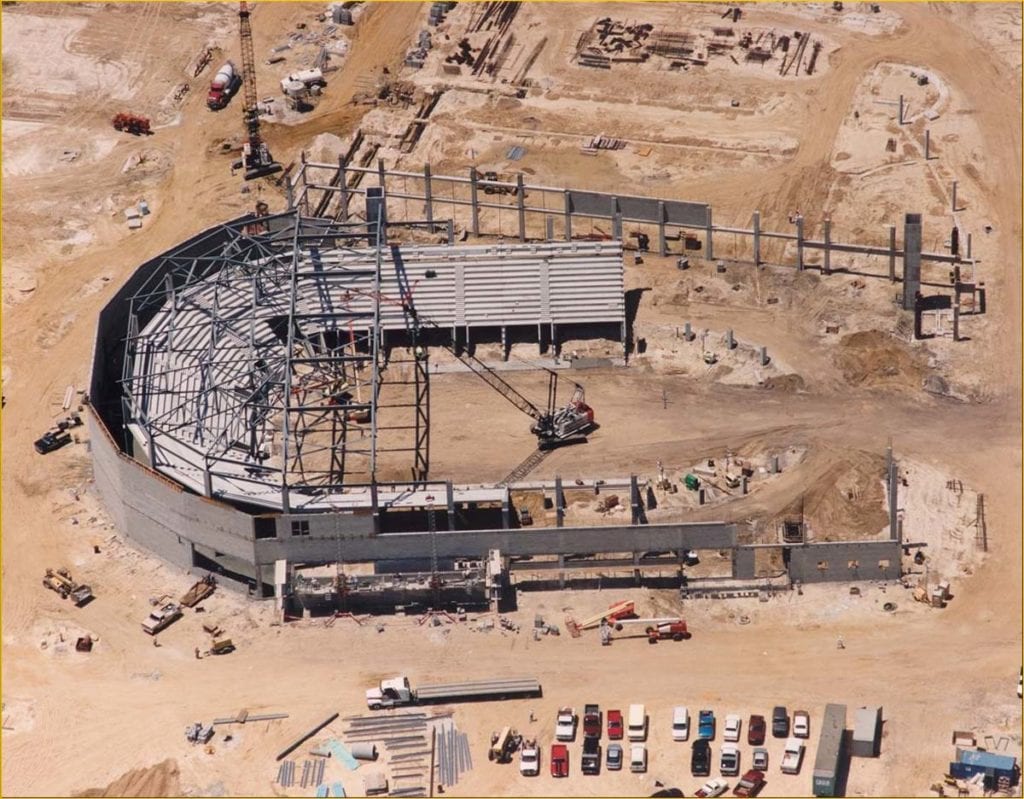 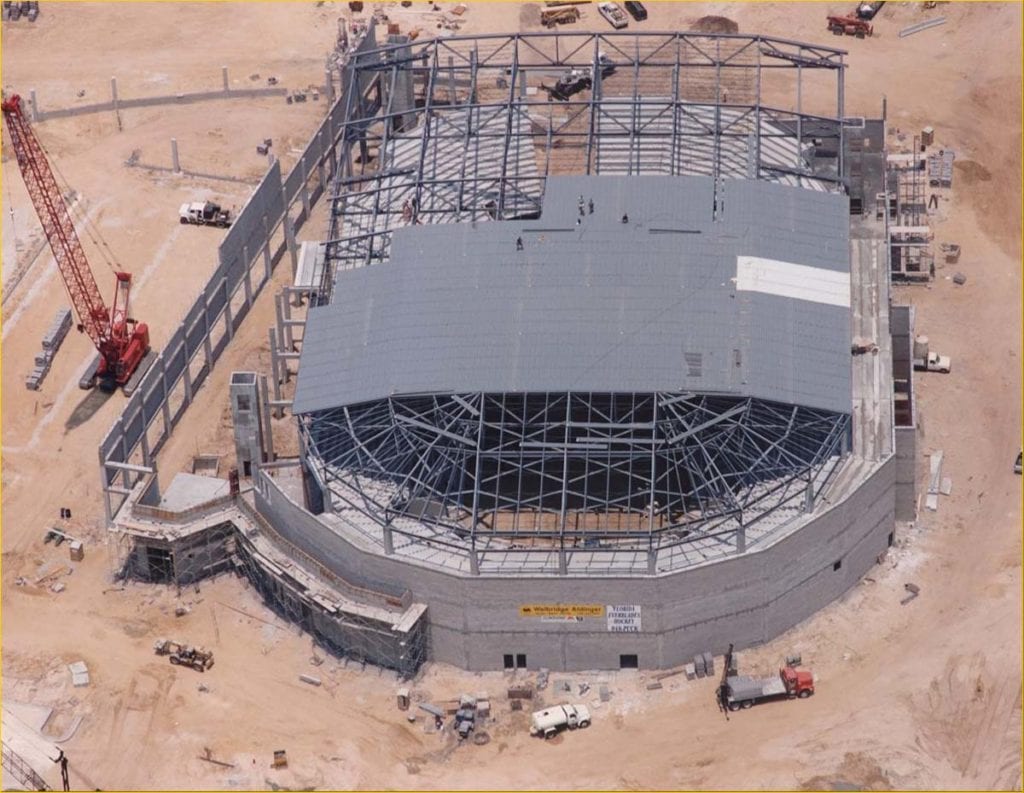 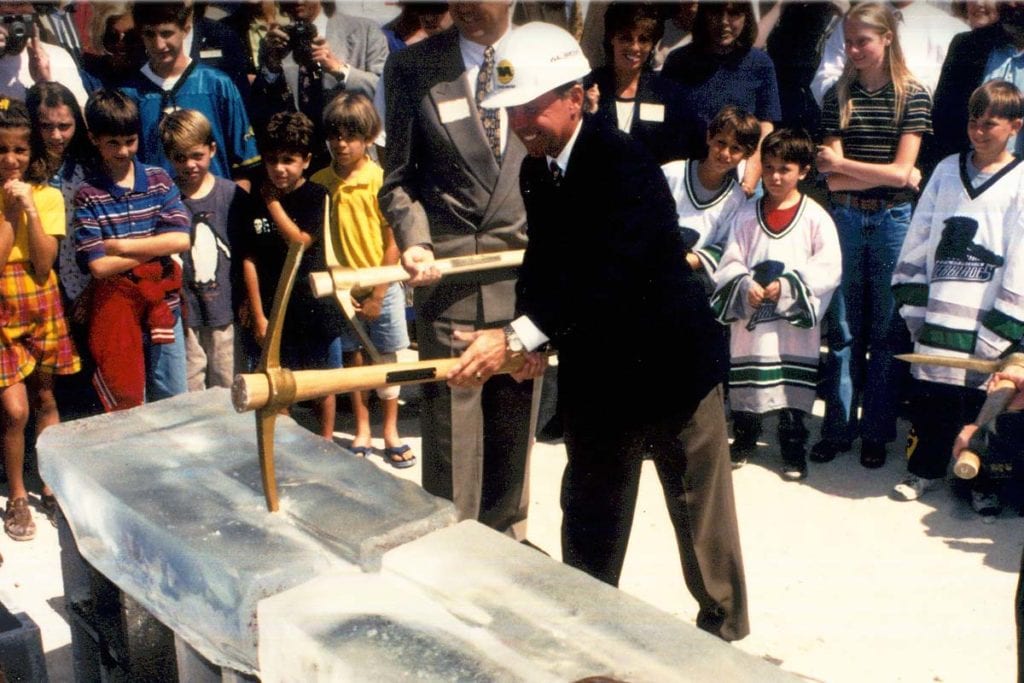 “The first day, we sat on the floor in a temporary office at 41 and Alico — no furniture, no phone number, no letterhead, no computers — and said, ‘Where do we go from here?’” recalls Bill MacKay, the Everblades’ vice president of operations and merchandising. He had previously directed spring training operations for the Boston Red Sox and was among the Everblades’ original management team of five, working alongside Brush to build the organization from scratch. “I thought it would be pretty successful — but not this successful.”

Twenty years later, more than 4 million fans have attended Everblades games, and the team has logged 798 wins, ranking it among the most winning teams of the East Coast Hockey League (ECHL). Over the years, the Everblades have developed numerous players who have advanced to the American Hockey League (AHL) and National Hockey League (NHL) levels. The Blades have made the playoffs 18 of 19 previous seasons and have recorded three conference championships, plus the ultimate victory, a Kelly Cup Championship in 2012. The final game of that series against the Las Vegas Wranglers drew a standing-room-only crowd of close to 8,000. 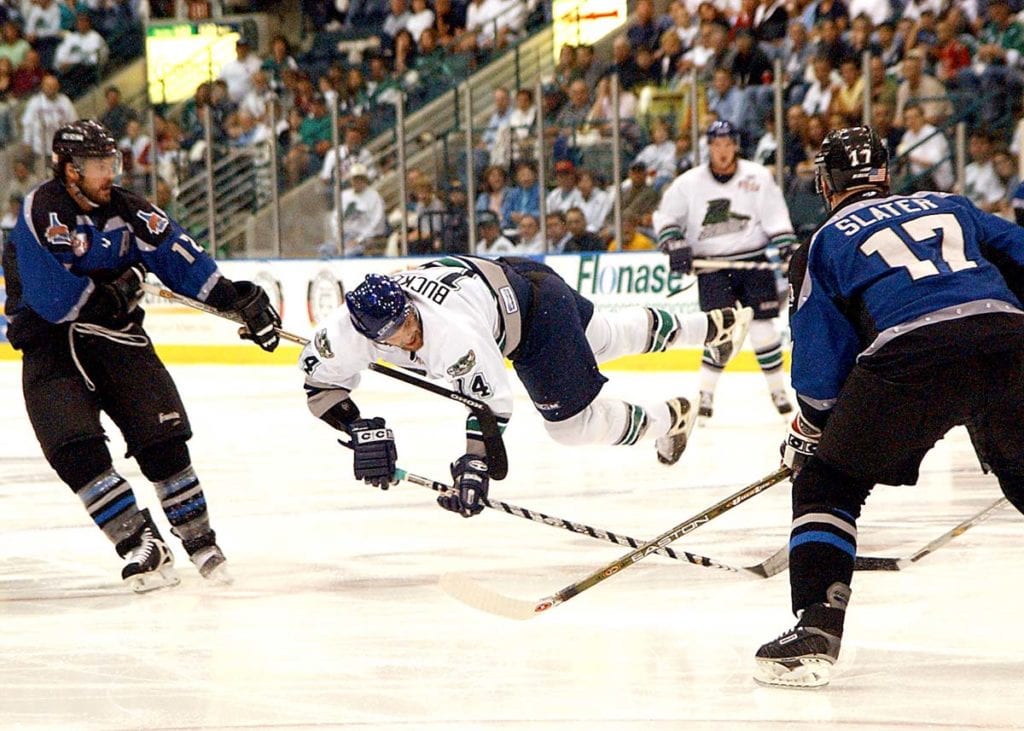 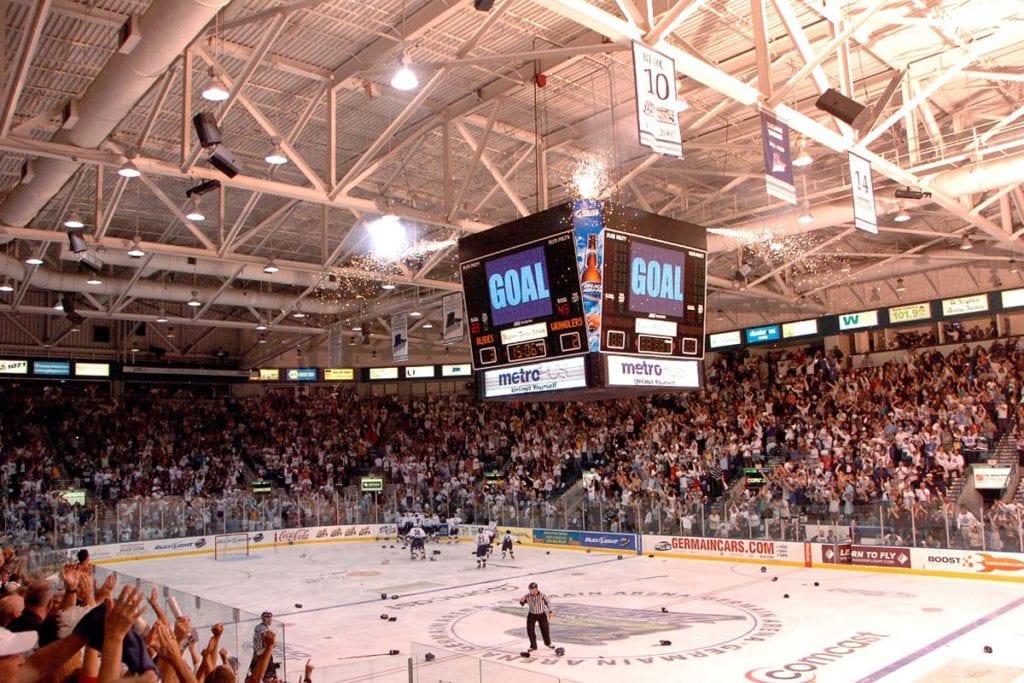 The Everblades’ popularity took off as fast as a hockey breakaway. With many fans in the area from hockey cities up north — and limited competition for sports entertainment — the Everblades drew capacity crowds at nearly every home game for the first few years.

“We had a great honeymoon period,” says MacKay.

Tom Buckley joined the Blades for the second season in 1999 and became one of the team’s most well-known players during his five-year stint. He still holds the record for most assists. The Everblades retired his No. 14 jersey at the organization’s 10-year anniversary. 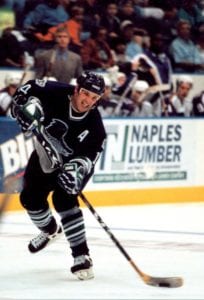 Buckley remembers the atmosphere being “electric” in those early days on the ice of what was then Teco Arena (Germain Motor Company purchased naming rights in 2004). He credits Brush and his partners — Hockey Hall of Fame “Builder” Peter Karmanos, Jr., and the late Thomas Thewes — for creating what he calls “the perfect facility for minor league hockey.”

“It’s loud in there when it gets going,” says Buckley. “Once you get in there and experience the excitement — you see it, feel it, touch it — you get hooked.”

The crowds were a mix of established ice hockey fans and new fans who had never before experienced the energy of watching the sport live. Brush and his team further engaged the community by hosting player meet-and-greets after games and enlisting players to participate in local charitable causes.

Over the years, the Everblades have donated $1.2 million to local organizations, made more than 500 appearances at charitable events, autographed thousands of items for charity auctions and reached more than 60,000 students though the Everblades reading program.

“Every week you were here, you would go to a school and talk to the kids,” recalls Buckley. 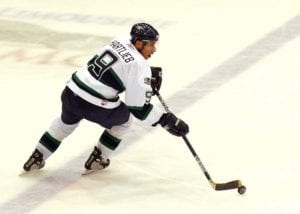 It wasn’t just a nice gesture; it was also savvy marketing to get fans into the seats. From the earliest days of the Everblades, local families recognized Swampee the alligator, the team’s mascot. He’s still featured prominently on the newly unveiled Everblades 20th season logo.

One of the team’s favorite events each year is the annual Teddy Bear Toss in December, when fans are asked to bring stuffed animals and hurl them onto the ice. Over the years, the Everblades have collected more than 100,000 stuffed animals and distributed them to sick children at Golisano Children’s Hospital and to other local children in need.

While many ECHL players are transient — moving frequently as they are called up to the AHL with the ultimate goal of playing in the NHL — several Everblades alumni have put down roots in the Estero area. Some, like Terry Lindgren, made a natural transition into the brotherhood of fire service. Now a lieutenant with Estero Fire Rescue, Lindgren was a defenseman for the Blades from 1999-2002 and an assistant coach from 2002-04.

Like Lindgren, Buckley met his future wife in Southwest Florida during his years with the Everblades. He’s now a local realtor with two little girls. The oldest, age three, will be getting her first pair of skates soon, he says.

Another beloved alumnus, Ernie Hartlieb, also decided to build his life and family in Estero after he retired from professional hockey in 2012. Hartlieb still attends every Everblades home game in the arena where his retired No. 9 jersey hangs from the rafters. Now Hartlieb is co-founder of The Hockey Summit, which runs off-season training camps for hockey professionals. 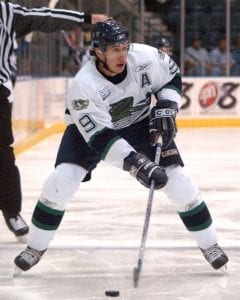 Hartlieb and other former players are planning to participate in a 20th anniversary alumni game this season (yet to be scheduled).

“It’s not just a hockey team,” he says of his seven years with the Blades and the continued camaraderie he has with the 17 or so alumni players still in the area. “A lot of us met our wives here, we settled here. All our best friends are Everblades.”

Hartlieb remembers the early days of the organization fondly: “It was wild; it was crazy. All the fans down here made us part of their family.”

Watching Estero grow up around the arena has been interesting, adds MacKay. Although there is more competition for attendance now that other sports teams have emerged at FGCU and elsewhere, the Everblades still draw better-than-average attendance in the ECHL. Germain Arena also draws large crowds to more than 100 other events it hosts each year, including concerts, trade shows, political rallies and sporting events. Additionally, the arena’s two recreational ice rinks stay busy year-round, and about 150 local children participate in the Everblades’ youth hockey program. During Hurricane Irma, Germain Arena sheltered thousands of evacuees. 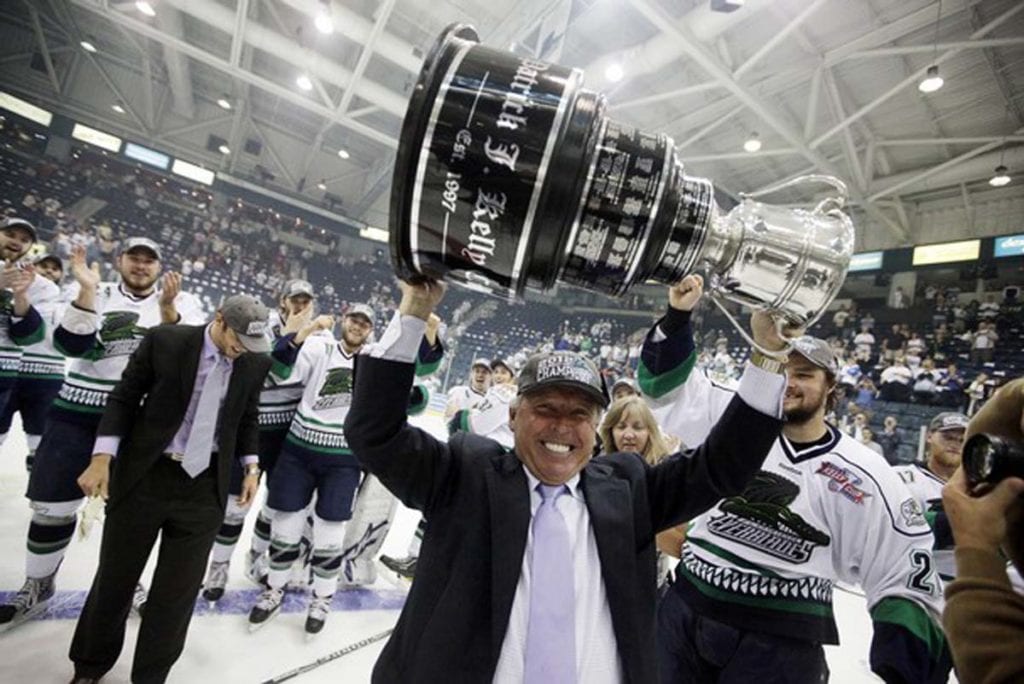 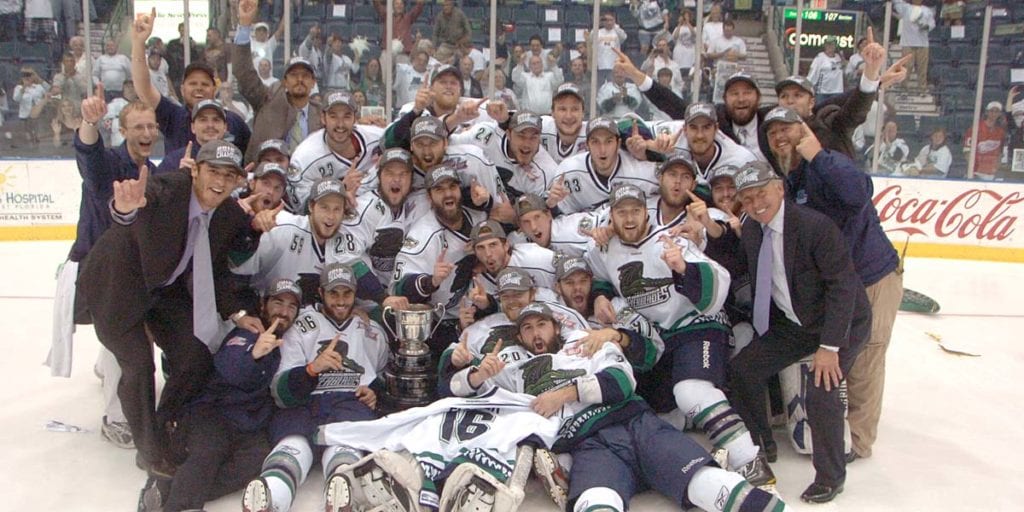 “We’ve been fortunate to be part of Southwest Florida’s growth, and I think we’ve added to the quality of life here,” says MacKay. “It’s been a nice 20 years.”

Brush, Head Coach Brad Ralph and the rest of the coaching staff have been busy recruiting talented players all summer and will undoubtedly present another exciting fan experience this season. The home opener is Oct. 13 versus the Atlanta Gladiators.

“I’m sure Mr. Brush has a few aces up his sleeve to bring electricity to the ice,” says Buckley.