When Armando Hernandez graduated from FGCU in 2014, he thought he’d work with athletes. An internship with the Boston Red Sox exposed him to some of the most physically gifted baseball players.

Now, as program manager for Home Base, Hernandez and a team of trainers help veterans get stronger and more fit physically; they also help with mental wellness. For military heroes who have suffered from post-traumatic stress disorder (PTSD) or traumatic brain injury (TBI), the Southwest Florida community also is helping.

On Nov. 8, there will be a golf tournament and silent auction at Pelican’s Nest Golf Club at Pelican Landing. Already, more than $150,000 has been raised, according to Robert Cameron, one of the event’s organizers.

“It’s such a feeling of pride to have patriotic people supporting us. It’s great living in a community like ours,” Cameron said.

Over the past six years, support like this has enabled the launch of the Home Base SWFL Regional Outpatient Clinic at Lee Health, which provides critical mental health services for veterans and military families.

Home Base was founded in 2009 in partnership with the Red Sox and Massachusetts General Hospital and works in cooperation with the United States Department of Veterans Affairs (VA) and Department of Defense. It has helped lead regional and national efforts with a multi-disciplinary team of experts working together to help service members, veterans and their families persevere and heal from the impacts of PTSD and TBI. 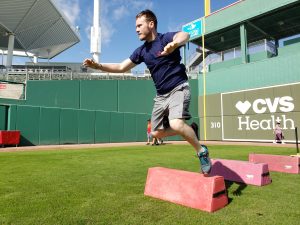 US Marine Hayden Fletcher works out at Fenway South

Studies have shown veterans with PTSD have an elevated risk of death from suicide, accidental injury and viral hepatitis. In June, Thomas Suitt released a paper he did for the Watson Institute at Brown University Cost of War Project, which estimates more than 7,000 service members have died during military operations since 9/11, while suicides among active-duty personnel and veterans of those conflicts have topped more than 30,000.

“Even the very conservative estimate that I came up with, it’s horrifying,” Suitt told National Public Radio. “We should really, really care.”

Hernandez said a VA study showed that Vietnam veterans who took part in a 12-week fitness regimen had decreased symptoms of PTSD.

“There’s a ton of evidence that if you take care of yourself physically, it helps your mental health,” Hernandez said. If you eat well, get good sleep and manage stress, it helps lessen pain, increase mobility and improve overall quality of life, he noted.

One of the veterans who has taken part in the fitness program is Estero’s Sean Lawler, who was in the U.S. Marine Corps for 4 ½ years.

“I warm up with cardio…then I do a weight circuit for upper or lower body. It’s a great program,” he said. “I wish more people would take advantage of it.” 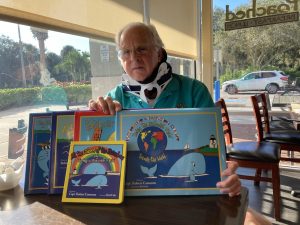 Bob Cameron with his Tuckey books

Hernandez said approximately 500 veterans have been helped by Home Base’s various fitness programs in the last seven years. About 100 have gone to Mass General for higher-level care.

When asked if Home Base is playing a factor in veterans relocating to the area, he said, “I’d love to know that. We still struggle with brand awareness.But I can tell you their quality of life is better because of Home Base.”

And that’s why people like Cameron want to be part of fundraising. A ship’s captain at 28 who sailed around the world, he used those adventures – as well as living on Cape Cod – to create a children’s books series on Tuckey, the Nantucket Whale.

Profits from the books go to Home Base.

“There’s so many veterans here, and this is a service we need to support,” Cameron said. “I’m proud to work with these guys.” 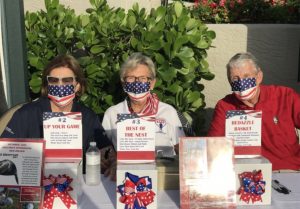 Raffle at the Pelican’s Nest Home Base golf fundraiser

Why: Benefiting Home Base veterans’ health and wellness programs