Nancy McCrory of Estero discovers a family she never knew 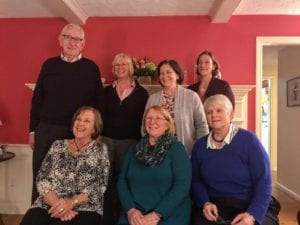 A spiral-bound copy of Nancy McCrory’s paternal grandparents’ original honeymoon diary served as a “road map” for her recent journey to Ireland. It’s a cherished family heirloom but one McCrory had no knowledge of before last year. In fact, she had no knowledge of her biological family at all, having grown up as an adopted, only child.

Her recent trip, on which she was accompanied by several newfound family members, is part of a larger, heartwarming story that originated 75 years ago and continues to unfold.

“We dined at the Queen’s Hotel where my grandparents stayed,” recounts McCrory. “My son, David, spoke with awe about being where his great grandparents spent their honeymoon as we held hands around the table. We could only imagine how things were then.”

Her grandparents, William and Annie Sheehan, were married in Dorchester, Mass., in 1914, and set off for their European honeymoon aboard the S.S. Baltic, writing that they became a little seasick and that steerage seemed to have the most fun — all the time dancing.

“I was a bit anxious as we drove on the ‘wrong side’ of narrow, winding roads in our nine-passenger van with tour busses whizzing by,” says McCrory of her adventure retracing their travels. But the landscape in various shades of green following rolling hills was gorgeous, and the weather was perfect. 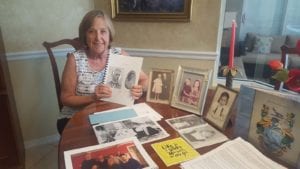 The company was even better, everyone being united in a mission to explore their common heritage. Tracing family roots has become more common in recent years, but not all long-lost relatives want to be discovered. Thankfully for McCrory, her newfound family eagerly embraced her.

“I spent my life as an only child of loving, adoptive parents,” says McCrory. “At the age of 75, I discovered I have six siblings, an aunt and a wonderful, extended family with cousins and grandchildren – and we’ve welcomed each other with open arms.”

Even more surprising to McCrory was the fact she is Irish. No wonder she fell in love with her Irish spouse.

“These discoveries have made a profound change in who I am, and it’s just beginning,” she says.

At the time of her wedding, her adoptive parents gave her the adoption records and her birth information. “I always knew I was a chosen child – out of a whole room,” says McCrory. (She learned later in life that her mom had some concerns that someone might claim her.)

After the deaths of her adoptive parents, McCrory’s initial searches led to information about her birth mother, who joined the Women’s Army Corps (WAC) following the adoption. McCrory’s son, David, who lives in San Francisco, took a great interest in his mom’s quest and helped dig up more information through census records and public documents.

To further support the search, he gifted his mother an Ancestry.com DNA kit in 2016. Based on the initial results, a family tree began to fall into place through contact with distant relatives associated first with her mother, about whom minimal information existed.

McCrory’s biological father had later married and raised a family with no indication that he was aware of another child’s existence. Finding his obituary, which named his children, created excitement and propelled the quest further.

“Dave made initial contacts on Ancestry and Facebook,” recalls McCrory. “In the beginning, my daughter was a little apprehensive and protective, fearing I might be rejected.” 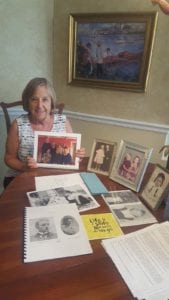 McCrory said some of the emails were comical: “Are we related?” queries went both directions, followed by DNA confirmations and photo comparisons. Meticulous searching through clue after clue that began with distant relatives led to five half-sisters, a half-brother and an aunt on her paternal side. How would they feel about her?

“One of my new sisters said their mom always had room for one more at the table and it carried through to the adult children,” says an overjoyed McCrory. Most of her newfound relatives reside in the New England area. McCrory grew up in New York but has spent the last 20 years in Florida.

An invitation from Massachusetts for the entire McCrory family to visit the Sheehan family provided a genuine welcome. The Sheehan family crest includes a dove, surely a sign for the expanded Sheehan clan. McCrory was surrounded by new sisters, a brother, cousins, grandchildren and extended families who dropped the “half”– they were simply family.

On McCrory’s birthday, three of her new sisters surprised her with a visit in Florida. One sister created a family photo book that includes all seven siblings and their children and grandchildren. A silver dove Christmas ornament and a pin to wear (the Sheehan Irish crest) were gifts in addition to the bound honeymoon diary which guided the trip to Ireland.

Among the travelers were McCrory and her husband, Owen, along with several other family members including their son and two granddaughters. McCrory’s youngest sister, Barbara Buntrock, and her two daughters accompanied them to explore their family history together.

“I never had a sister before,” McCrory told Buntrock.

The four girls in their 20s also became great companions. Travels included downloading Irish songs to sing in the van, an Irish storyteller, sailing (a Sheehan passion) and Irish entertainment.

“The young people were most obsessed with following the diary exactly,” says McCrory. “My son read from the diary for each day’s adventure and was thrilled to find the remnants of his great-grandparents’ family home.” It was located on the west shore of Glanmore Lake in the hills above Lauragh in County Kerry.

One thing hasn’t changed through the decades that have passed since McCrory’s grandparents followed their roots on their honeymoon. David read from William and Annie Sheehan’s diary: “…one cannot very well describe Ireland. You have to go and see. Then you will know.” 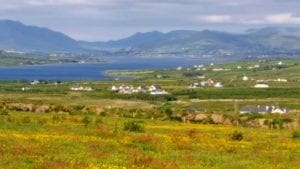 “I went from being an only child for 75 years to being part of a big family!” she says, spreading her mementos and new family connections across the table in her Estero home. Her sister created a family photo calendar and meticulously marked all the birthdays in each month. All this in less than a year — imagine the future.

It may be a little like the signed card welcoming McCrory into the Sheehan family that reads: “Life is a story you write as you go. Welcome Aboard.”