Every week, Rob Kircher is knocking on the doors of Southwest Florida’s unsung home cooks, uncovering the culinary talents of regular folks and bringing them into the spotlight on his TV show, “Great Neighborhood Cooks,” airing Sunday mornings on FOX 4. 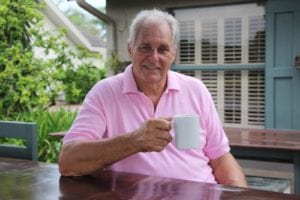 He visits the opulent neighborhoods of Naples and ordinary homes just “down the street or around the corner,” as he says in the show’s opener. Once, he even dined with a family who lives aboard a 38-foot yacht harbored in Cape Coral.

“The whole idea is different walks of life and cultural diversity,” says Kircher, a seasoned producer who is on his third cooking show. His now-syndicated “Better Health, Greater Wealth” was filmed in his outdoor kitchen in Spanish Wells. This time around, he’s filming in other people’s kitchens in what he calls “eavesdropping” style, where the viewer listens in on Kircher’s conversation with the cook.

“We’re cooking as we’re getting this person’s backstory,” he explains. “Nothing is scripted. It’s all off the cuff.” 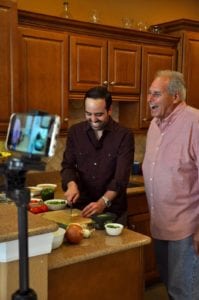 Recently, Estero Life accompanied Kircher as he knocked on the door of Estero cooks Juan Carlos and Jamie Homez, a young couple living in Bella Terra with a curly-haired toddler, Elisa, and another baby on the way. This seemingly typical family was uncovered by “Great Neighborhood Cooks” Director Tonchi Raljevich, who works with Juan at Univision Southwest Florida. Juan is the production manager for Spanish news program D’Latinos.

As a journalist from Venezuela, Juan is comfortable being in front of a camera, but his Iowa-reared wife is not. Before the cameras roll, Jamie is bold and relaxed, but as the filming begins, she is glad for the excuse of a fussing baby to divert her. Juan takes charge in the kitchen as Kircher prompts him with questions about the dish he is preparing. 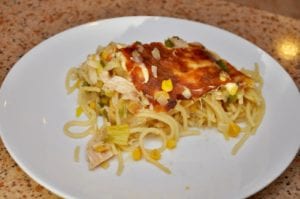 It’s an old family recipe, says Juan, who remembers his Grandma Alicia making this crowd-pleasing baked spaghetti dish. Juan makes the meal from memory rather than recipe and doesn’t even know the name of this familiar favorite. He just calls it “Icia’s Spaghetti” (using the nickname for Grandma Alicia).

To Americans, spaghetti means tomato sauce and meatballs. Not so for this Venezuelan cook. His spaghetti dish starts with a stew of fresh veggies, including onions, green peppers, Roma tomatoes, celery, olives, capers, corn and a chopped leek.

“Everything we cook has a little Venezuelan touch to it,” says Jamie.

She has added her own influences to the family’s meals. As a former four-sport athlete, Jamie has 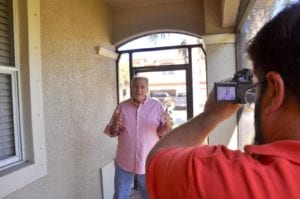 always been a practitioner of healthy living. She works as a child advocate at Goliasano Children’s Hospital but previously was a personal trainer and wellness coach. Jamie emphasizes using whole foods and nutrient-rich ingredients when preparing meals.

“I’m eating healthier than before, but she’s eating less healthy than before,” jokes Juan of the influence each has brought to the table.

As Juan cooks, Kircher keeps the conversation going by asking how an Iowa girl met and fell in love with a Venezuelan. The surprising answer is salsa — no, not the kind you dip tortilla chips in. Salsa dancing!

After Juan’s broadcasting career brought him to a network in Iowa, he became friends with the owner of a local dance studio. Jamie started taking lessons for fitness and fun, and Juan soon became her favorite salsa partner. 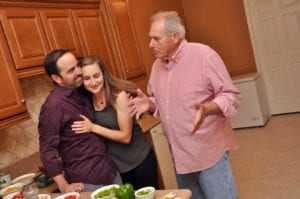 While the layered spaghetti dish bakes in the oven, there’s 30 minutes on the clock to kill, so, at Kircher’s beckoning, Juan puts on the salsa music. Juan invites his bride to follow his lead, and the two dance the kitchen floor to Ray Barreto’s “Acid” as the minutes tick down on the timer.

It’s doubtful any of their Bella Terra neighbors know they are living next to a salsa-dancing pair of great home cooks, but Rob Kircher has now exposed them. You can watch Juan Carlos and Jamie Homez in Episode No. 18 of “Great Neighborhood Cooks,” airing Sunday, May 20.

Other recent episodes have featured a retired CEO who serves marvelous lobster rolls from a food truck and a Naples wine collector with about 2,000 aging bottles. Kircher also frequently teams up with Chef Ruth Manchester, a “Best Chefs America” designated chef from Cape Cod, to explore local hotspots in “Rob & Ruth’s Hidden Gems.”

“The really fun part of this show is that we get to meet a lot of interesting people,” Kircher says. “It’s all walks of life and all styles of cooking.”

From the kitchen of Juan Carlos & Jamie Homez

Ingredients:
The Stew:
1 Large onion
2 or 3 cloves of Garlic
4 Green Onions
1 Leek (only cut a little green and the rest of the white stem)
1 Green Pepper
3 Roma Tomatoes
Salt and Pepper to taste
1 shredded, cooked Rotisserie Chicken
2 stocks of Celery
10 Pitted Olives
1 tablespoon of Capers (or to taste)
1 can of Creamed Corn
1 can of Whole Corn

Butter (or oil) as needed

Preparation:
1. In a tall edge sauté pan over medium heat, warm 2 tablespoon of butter with the onions and garlic until onions are transparent. Add ingredients in sequential order as listed above. Once you add the corn, cook for about 5 minutes and mix all ingredients well.
2. Meanwhile, cook the pasta for 9 minutes or “al dente.”
3. Grease baking pan (use a traditional lasagna pan 13x9x3 in.) with butter and add half of the spaghetti to make the first layer.
4. Add half of the stew to create the second layer. Then add a layer of mozzarella cheese (10 slices).
5. Repeat the layering process a second time (cheese should be the top layer).
6. Preheat the oven to 250 degrees F.
6. Place dish in the oven, uncovered, and bake for approximately 30 minutes.  If dish was chilled before baking, cover with aluminum foil and bake for approximately 30 minutes at 300 degrees.
7. Brown the cheese by placing uncovered dish on “Broil” setting until desired color is reached (about 5 minutes).