A Look Back as Florida Gulf Coast University Celebrates 20 Years

When Karl Smesko arrived at Florida Gulf Coast University in 2001 to start up a women’s basketball program, the practice facilities consisted of an outdoor court behind a row of trailers offering two baskets with chain nets. Similarly deficient, the university’s new baseball and softball programs were practicing on recreational soccer fields with a giant swale, no dirt and no fences.

“If we were practicing at the same time, it was dodging artillery,” recalls FGCU Softball Coach David Deiros.

Smesko, Deiros and Baseball Coach Dave Tollett are the founding fathers of their respective programs. As the university celebrates its 20th anniversary, these longtime pals recall the trials and triumphs of starting an athletics program from scratch. In 2001, the five-year-old university had about 2,000 students and was unknown to most recruits. 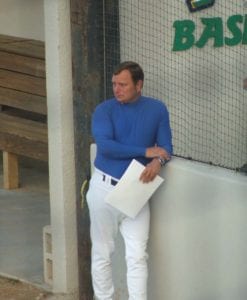 “Not only did we have to sell our vision for what this program could become but we also had to sell this institution,” recalls Deiros.

Although the visions were grand, none of these coaches imagined the athletic successes FGCU would achieve within the next 15 years. In 2001, the only other FGCU sports were golf and tennis. Now FGCU boasts 15 athletic teams, and all of them have achieved NCAA Division 1 successes, recording many Atlantic Sun Conference titles. The Sweet Sixteen appearance of the Men’s Basketball team in the 2013 NCCA Tournament brought “Dunk City” notoriety to FGCU. And Major League Baseball Pitcher Chris Sale is widely recognized as FGCU’s most famous alumnus.

“Other athletic directors marvel at what we have done here,” says FGCU Athletics Director Ken Kavanagh. “To have success across the board in such a short period is something that has been noticed on a national basis.” 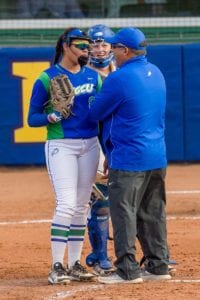 Deiros has experienced similar success in softball with an ASUN Tournament title and an NCAA Tournament appearance in 2012, along with three regular season titles. Last year, Softball became FGCU’s first program to host a No. 1-ranked team (Florida State).

“Ten years ago, none of us would’ve thought FGCU would become what it has today,” says Smesko, a seven-time ASUN Coach of the Year with 10 consecutive postseason tournament appearances. “We’ve been nationally recognized as one of the best mid-major programs in Division One. I don’t think any of us, 10 years ago, thought  that was possible.”

It’s been a team effort from the start. Smesko, Deiros and Tollett chuckle as they recall memories from the early 2000s when they shared an office space in a trailer. To relieve the stress, they would do spontaneous putt-putt challenges or head outside for a home run derby. 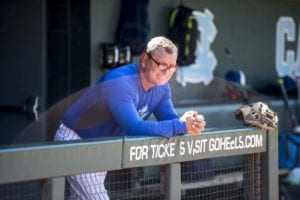 “I think we were all bonded by the challenges of starting a new program,” says Smesko.

He was the lucky one, starting the Women’s Basketball program with five scholarships to offer. Deiros and Tollett had no scholarship money and continued to work their day jobs before heading to FGCU in the evening. More than once, they slept in a vehicle while on recruiting trips. 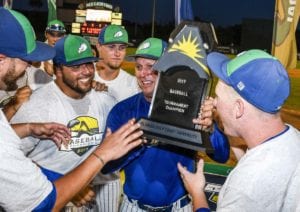 After plans had been drawn for the construction of baseball and softball facilities at FGCU, there was an unexpected complication which caused Tollett and Deiros some panic.

“We went through about 48 hours where we didn’t think we would get our facilities on campus,” Deiros recalls. “There was uncertainty, and (FGCU President) Dr. Merwin was unbelievable in making sure the project went forward and we got our fields.”

The administration understood that an important part of growing a young university is growing its athletic programs. FGCU advanced from the National Association of Intercollegiate Athletics (NAIA) to NCAA Division II status in 2002, and soon the Eagles were out-performing the competition.

“We were too good,” says Smesko, recalling the frustration of seasons which ended in January because no one wanted FGCU in their conference. “There was fear we would dominate the schedule.”

Finally, in 2007, FGCU achieved Division I status and was welcomed into the Atlantic Sun Conference. It would be four more years until FGCU was eligible for postseason play due to NCAA rules.

“Despite all the hardships, there’s not a single one of us who looks back on those days and doesn’t have a smile on his face,” says Deiros. “It was a fun time to be here.” 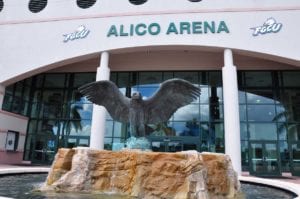 Things aren’t nearly as rough these days for the founding coaches. Deiros and Tollett enjoy sizable offices, player amenities and conference facilities in the Outdoor Sports Complex built in 2009 next to Swanson Stadium. Smesko is moving into a new, 21-by-12-foot office at Alico Arena this month.

Phase One of the arena expansion is being completed just as FGCU’s 20th freshman class arrives. In addition to larger offices for the basketball coaches, the $4.5 million expansion includes a new academic center and a theater-style film room for reviewing video, as well as an enhanced sports medicine area. Phase Two will add a strength and conditioning facility exclusively for student athletes.

“The real unspoken heroes are the student athletes who took a chance on FGCU before it had any resources,” says Smesko.

Deiros says he sometimes misses the camaraderie of those early days in the trailer when state-of-the-art facilities were just a dream — “And then I come to my senses because I’m not in a portable!”

“The bond we developed over the shared experience and the shared trials — that’s never going to be forgotten,” he adds. “There’s nothing like that bond that comes from building something together.”