The Fort Myers metropolitan area continues to make the Top 10 lists of both Forbes and USA Today for the fastest growing cities in the U.S. — and Estero is clearly a major contributor to this growth. Construction is booming in the Village of Estero, and all indicators point to continued economic growth in 2019.

“We are one of the highest growth areas, certainly for the state, if not the country,” says Village Manager Steven Sarkozy.

In Estero, 2019 might be the busiest construction year yet. Not only will road improvements be occurring on major thoroughfares (yes, get ready for temporary traffic woes), but many new commercial and residential developments are expected to break ground, including several hotels, two apartment complexes, two senior living communities and multiple retail developments.

“The overall outlook continues to be good,” asserts Village Council member Jim Wilson, who serves as the liaison to regional economic development organizations. “It’s amazing how many people want to be in Estero. It appears to be one of the hottest communities in Southwest Florida.”

New construction in 2018 added a collective $87.4 million in taxable property value, generating about $68,000 in additional revenues, according to Village of Estero Finance Director Lisa Griggs Roberson. Major developments breaking ground last year included the Genova condominium community (which continues buildout in 2019) and Lee Health’s much anticipated Coconut Point medical facility, which opened an emergency room and a myriad of other services last month. The Shoppes at Estero Grande, at the corner of U.S. 41 and Estero Parkway, continues to expand, adding Starbucks, and Aldi is set to open across the street by Walmart. Additionally, a 198-unit apartment complex is planned to break ground behind Estero Grande Shoppes this year.

A similar sized apartment complex called Edera is planned for the corner of Via Coconut Point and Williams Road near the Hertz headquarters. Also in the Coconut Point area, a Hilton Garden Inn has been proposed next to the fire station in front of Rapallo.

The five-story Spring Hill Suites by Marriott broke ground in 2018 near Embassy Suites on Arcos Avenue, and a new office building, the Arcos Executive Center, has been approved at the northeast corner of Corkscrew Road and Three Oaks Parkway. Two more hotels are also in the works: a 120-room hotel to be built at the southwest corner of U.S. 41 and Coconut Road, and a five-story hotel on the lake at Miromar Outlets.

Clearly, developers are expecting tourism to increase in Estero, despite the recent concerns about red tide and blue algae in coastal waters. The most recent Executive Business Climate Survey Report, conducted by Florida Gulf Coast University’s Regional Economic Research Institute (RERI), showed 91 percent of the 195 Lee County business executives who responded indicated they were “very concerned or somewhat concerned about the effects of red tide and algae blooms on the local economy.” 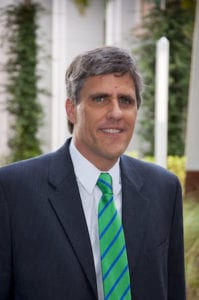 “We will start seeing significant effects in terms of red tide and blue algae if the market decides it is a permanent problem,” says FGCU economist and RERI Director Christopher Westley.  However, air travel and tourist tax revenues have thus far remained unaffected.

Some of the top scientific minds at FGCU are working to determine the cause of the current outbreaks and are “helping to shape a cure,” adds FGCU President Mike Martin.

In Estero, no one seems to be too alarmed by red tide. Joe Pavich, Sr., president of Bonita Springs-Estero Realtors (BER), says it has not impacted local home sales.

“I’m a 30-year resident of Estero, and red tide has been around here, at certain times of the year, ever since I moved here,” notes Pavich.

The most recent BER report shows sales have remained strong and stable for the last three years, with a median closing price near $300,000. The “hot zone” is the $300,000-$500,000 market, which is currently undersupplied, adds Pavich. The luxury market is also strong for resales in communities like The Brooks, West Bay Club and The Colony, he says.

In new construction homes, Pavich expects Wild Blue — a massive community with resort-style amenities planned east of Estero’s boundaries on Corkscrew Road — to be hugely popular. Floor plans being offered by Lennar and Pulte range in price from $400,000 to over $1 million. Custom homes by Stock Development will run from $600,000 to $4 million.

“It’s going to be a great year,” predicts Pavich. “Just as long as we don’t have any surprises from the government or interest rates jumping, we’re going to be fine.”

Home sellers in Estero may also see a benefit from the new Estero Education Initiative; all Estero residents are now guaranteed their children can attend an Estero school.

“We know good schools affect property values,” says Pavich. “I think this is going to be a big shot in the arm for Estero.”

Good infrastructure is another must for maintaining property values and the overall appeal of a community. Several roads projects are planned for 2019, most notably the complete overhaul of the Corkscrew Road/Interstate 75 interchange, which is being designed to alleviate traffic backups.

That project is under the jurisdiction of the Florida Department of Transportation (FDOT). Meanwhile, Lee County DOT will be handling road improvements on Corkscrew Road east of Estero. However, the Village has some of its own infrastructure projects. The Estero Parkway “complete streets” redesign will be kicking into high gear, adding bike and pedestrian paths, street lighting and landscaping.

Estero’s Planning and Zoning Board (PZB) and Design Review Board (DRB) are also keeping busy as they review new development proposals and make recommendations on existing plans.

“We are trying to keep our standards very high with regards to the quality of buildings, as well as architectural details,” notes Sarkozy.

Many building projects that were put on hold during the recession are now coming to fruition. In Lee County, the construction industry represents one of the largest growth sectors, with nearly 11 percent of all residents currently employed in construction, notes Westley.

“Estero did better than other regions of Lee County in responding to the hurricane, mostly because there seems to be more capital investment there,” he notes. “Overall, our region in Southwest Florida proved itself to be pretty resilient.”

Lee County is enjoying low unemployment rates (staying below 3 percent for several months in a row), and regional taxable sales are at record highs, adds Westley. Nationally, the U.S. is experiencing the second longest economic recovery period in history.

“If it continues through next summer, it will become the longest in 150 years,” notes Westley.

That might be a double-edged sword. While it’s good news, could it mean a recession is imminent?

“I don’t think our growth is sustainable on the national level, which means the bust will be inevitable,” predicts Westley. However, its timing and severity remain unknown. “We are in a national inflationary boom right now. Whether that will continue into 2020 or beyond, no one knows for sure, but I feel 2019 will see the expansion continue.”

Westley remains concerned about the lack of diversification in Southwest Florida’s industry, but things are improving.

FGCU is helping the region build its own future workforce, increasingly working with large area employers like Hertz, Arthrex, Chico’s and Gartner to develop internship programs. The university also is introducing new majors based on the needs of local companies, including construction management and supply chain management, reports President Martin. Currently, FGCU is the major supplier of new nurses to Lee Health and NCH healthcare systems, he adds.

“I believe a regional university tries to give every student a springboard for success, including the opportunity for success if they want to stay local,” says Martin.

FGCU’s rapidly growing Entrepreneurship program continues to churn out new businesses which are starting to make an impact on the local economy, as well. Enterprises launched by FGCU students have generated about $15 million in revenues, notes Martin.

“The good news is many of these kids are from the region and want to stay here,” he says of these bright, young minds.

If they stay in business in Estero, they will be able to connect with an improving Estero Chamber of Commerce. The Village of Estero recently agreed to give $25,000 to the Chamber to help fund its first full-time executive director. Having this “go-to” person as a resource for existing and potential new businesses is an asset as the Village continues to operate “government lite” style with a full-time staff of only eight, says Councilman Wilson.

The Chamber’s new executive director, Sarah Newcomb, has a background in economic development with Lee County. She aims to increase chamber membership and communication in 2019.

“I care about existing businesses but also the new ones who come to the area,” says Newcomb. “With all this growth, there will be many new businesses who want to come here or open a second location here.”

As she has begun talking with Estero business owners, she hears excitement about the future.

“I’m very optimistic,” says Newcomb. “I see nothing but growth in every industry.”

Dr. Martin, whose background is in economics, echoes that optimism for 2019: “The economy has been very hot. I think the growth will slow down some, and I don’t think that’s a bad thing. From all the indicators that land on my desk, I’m pretty optimistic.”