It’s a story that stretches from right here in Estero to Virginia to New Jersey to Colorado, and even, perhaps, reverberates throughout the universe.

Ara Hagopian is an Estero firefighter whose role, in part, is to help save lives. Ironically, his life was “saved” not once, but twice. Forty-two years ago, he came into this world and was given up for adoption as an infant. His adoptive parents saved him from an uncertain fate, providing him love and structure. 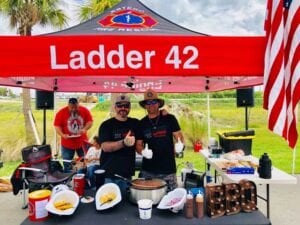 While Ara has Italian, German, Indian-Hungarian and Irish in his bloodline (which he didn’t know until recently), his adoptive parents are of Armenian descent. He went through life knowing he had been adopted, but he assumed he had no siblings and had no idea where his birth parents lived.

veys. “I had awesome parents and a killer education. It’s no skin off my back.”

Then, something pretty wild happened, stemming back 11 years. While Ara wasn’t actively looking for biological relatives, it turns out, some people were looking for him — four of them, in fact: Alan and Matt Shofner, Amber Kelly and Kasey Noel. All are siblings to Ara.

“We found out that our parents had a child and gave him up for adoption,” Alan recalls. “It was a closed adoption, and there was very little information. I gave up trying to find my sibling after

Well, one sibling kept up the search for another decade — secretly.

“I just did it on my own without telling anybody because I didn’t want to disappoint anybody,” recounts Amber. “I was doing it low-key. I didn’t do it every day, but I checked 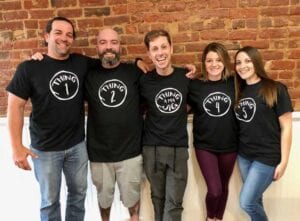 often. I put my name and information into several different outlets.”

Five years ago, Ara married his high school sweetheart, Melodie. She knew Ara was adopted and wanted to know more about his ancestry and background. More motivated than Ara to uncover his genealogy, she unsuccessfully tried to get Ara to sign up on ancestry.com, but his curiosity wasn’t piqued. Then, last October, the genealogy website that has connected 20 million people to a deeper family story, ran a special. Only because of the discount offer did Ara relent.

“Melodie was the catalyst and liaison for all of it,” he admits. “She helped process things quickly and took the burden off me.”

Once Melodie submitted Ara’s information, a message was promptly received from a potential uncle. He wrote that he was shaking as he typed. Uncle Robert then passed

the information onto Amber, who had unsuccessfully been searching for more than a decade.

“As soon as I saw the picture, I knew this was my brother,” says Amber. “I sent his wife a message.”

Upon receiving Amber’s message, Melodie reports: “My palms were sweating as I replied to her that she had the right person.”

Amber immediately reported the happy news to her siblings. 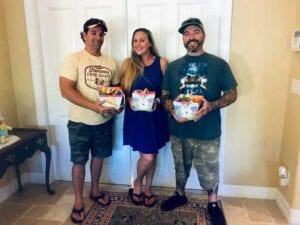 “When Amber told me, I had the biggest smile on my face; I was over the moon,” says Alan.

t he had siblings — and that they longed to connect with their oldest brother.

“A kaleidoscope of emotions came over me,” he recalls. “My adoptive parents were in town when the news broke. They’re both scientists, and my dad, who doesn’t show much emotion, was crying

The connection was made just a few days after Christmas. And on New Year’s Eve, the first phone call between siblings was made. They eagerly planned a face-to-face meeting.

After 42 years living as an only child, Ara now had two brothers and a pair of sisters. The five siblings converged at a rented townhouse in Virginia. As they walked in the door, a huge family hug ensued.

“When we walked in the room together, it was awesome. It was like nothing had ever missed a beat,” says Alan, reflecting on the moment.

The family spent five glorious days together. They talked, laughed and cooked. They also discovered there are commonalities in their gaits, personalities and gestures: their eyelashes flutter when in thought. 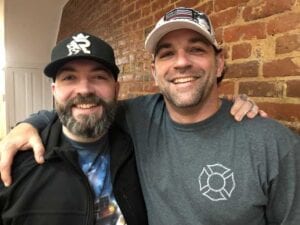 Before the siblings parted, they all got matching tattoos: five interlocking triangles pointing outward toward five circles. The circles represent their lineage in correspondence to their birth order. The triangles symbolize new beginnings.

“We are already past th

e point where we are just learning about each other,” marvels Ara. “Now, it’s typical family talk.”

And it gets even better for Ara. Alan’s desire to be near his newfound brother inspired him to relocate from New Jersey to Lee County just last month. Alan drove 19 straight hours to the Estero Fire Department to see Ara.

“We are hanging out, working out together, cooking, having a good time,” reports Alan.

The pair recently entered a first responders’ chili cook-off under the name “Smokin’ Siblings.” Their interaction is so in-sync, it’s like they’ve been in each other’s lives from the beginning. 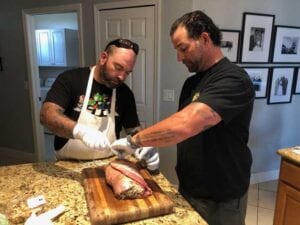 This reunion story isn’t over. Ara and Alan are ecstatic that within three yea rs or so, three more of their siblings plan to move to Florida, allowing frequent gatherings — likely every other weekend.

In late May, all the kinfolk went to youngest sister Kasey’s college graduation. At the event, Ara saw his biological mother for the first time. He speaks to her frequently via video chat.

“She cries every time, and the talks have been great,” Ara says with a smile.

So, how was Ara’s life was saved twice? Although he didn’t realize it, his soul needed family connection. When his wife “lit a fire” under her firefighter husband to explore his ancestry, Ara never imagined how greatly his life would be enriched.

“I see the look in Ara’s eyes now,” says Melodie. “He’s just changed. His situation can’t be any better than it is now. It melts my heart.”