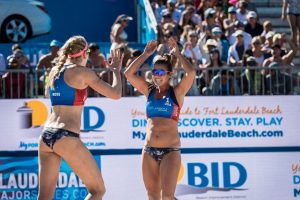 One would be hard-pressed to find a young university in any 20-year stretch achieving the athletic accomplishments of Florida Gulf Coast University:

How did it all happen? Vision, philanthropy and grit.

This amazing class of inductees is a combination of philanthropy, leadership, athletic ability and, simply, magic. These individuals helped the Eagles advance quickly from Division II to Division I and made the school known, not just in the state, but nationally and internationally.

FGCU’s story is unique, said Athletic Director Ken Kavanagh. He noted the 85 conference championships and 42 NCAA appearances the school has made — quite remarkable considering FGCU didn’t join a conference (Atlantic Sun) until the 2007-08 season.

Kavanagh also noted that FGCU ranked No. 19 on a James Madison study of winning percentages for 353 Division I teams from 2015-2020.

“We were the best of all schools in Division I that didn’t have football,” he added. “That’s mind-boggling.”

How it All Began

Griffin, a successful businessman in citrus and agriculture, not only donated 760 acres to the state for the FGCU campus to be built in 1991, but his company, Alico, Inc., followed that with a $5 million donation to help build Alico Arena, kickstarting the athletics program.

Susan Evans, who retired as chief of staff last year after 27 years at FGCU, told FGCU 360 it’s fitting that Ben Hill Griffin Parkway leads folks to the school’s campus because he “paved the way.”

Griffin was one of the first three FGCU Athletics Honorary Letter winners in 2011 – Merwin and Swanson are the others. He died in July 2020.

“We don’t get (former coach) Andy Enfield and the players without the facility,” he said.

Kavanagh remembers the first time he saw Alico Arena in 2008 as a visiting athletic director from Bradley University: “I was impressed.” Six months later, he was leading the athletics program at FGCU.

While Griffin donated millions, it was FGCU’s second president, hired in 1999, who was known as “Dollar Bill” Merwin due to his prowess for fundraising. He was tall, tanned, handsome and charming and greeted everyone with a warm smile and even warmer handshake.

During his eight-year tenure as president, Merwin raised more than $175 million in private gifts and donations. He also helped guide the university’s expansion from 3,200 students to more than 8,300. He died in 2011.

“He went on in detail that the university was a diamond in the rough, and in 10 years, they would be a power to be reckoned with throughout the country,” Merwin Jr. said.

Staying in close contact with Athletic Director Carl McAloose, President Merwin was keenly aware of FGCU’s challenges as a Division II independent. Scheduling games in their region became more difficult; some teams refused to play FGCU. The closest conference was the Sunshine State Conference, which included all private schools. Administrators from those schools said FGCU would have to limit scholarships in sports to join.

Merwin announced that FGCU would begin the steps of going into Division I in the mid–2000s. It couldn’t have gone any better. 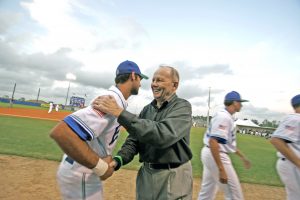 Thanks to FGCU Baseball Coach Dave Tollett’s constant interaction with Raymond Building Supply owner Duane Swanson, the Eagles not only received a generous donor but a man who encouraged others to give to FGCU Athletics, too. After leading the charge to get both the baseball and softball complexes built for the 2004 season, Swanson saw the stadium named after him.

Swanson kept working with community donors to get funds for the Outdoor Sports Complex, built in 2009 — now home to 11 of 15 FGCU athletic programs. Kavanagh said one of his most heart-warming days was bestowing Swanson with an honorary letter of distinction in 2011.

“We could’ve done it against Florida or Miami at Hammond Stadium, but we said, ‘We need to do this at Swanson Stadium,’” Kavanagh recalled. “His wife, Cookie, told me he was so excited. We did it before the game against Michigan.”

All the players stood in front of the dugout and shook Swanson’s hand while Tollett brought him by in a wheelchair.

Swanson became the only person in FGCU history to have his funeral services held in Alico Arena.

Without Swanson’s generosity to build the fields, the baseball program might not have gotten a talented pitcher named Chris Sale.

Sale first showed his prowess when he lit up the Cape Cod League after his sophomore season. In his junior year, he went 11-0 with a 2.01 earned run average in 17 games.

In the 2010 Major League Baseball Draft, Sale was picked in the first round by the Chicago White Sox —the 13th player chosen. Sale climbed the minor-league ladder from Class A to Triple-A before being called up to Chicago, where he made his MLB debut on Aug. 4, 2010. The White Sox traded him to the Boston Red Sox on Dec. 6, 2016.

Last season, Sale went 5-1 with a 3.16 ERA as he helped the Red Sox reach The American League Championship Series.

Sale not only has remained close to the baseball program at FGCU, but he and wife Brianne recently made the largest gift to the school by an FGCU graduate, $1 million. 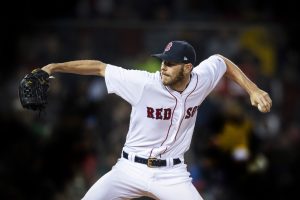 FGCU in the National Spotlight

As Sale was becoming an MLB All Star, another FGCU athlete was representing Team USA in the Rio Olympics in beach volleyball.

As FGCU established itself in sports in the early 2000s, the Eagles started attracting and keeping local athletes. One of the first was Brooke Youngquist Sweat from Canterbury High School, an Estero native.

This talented volleyball player helped lead the Eagles to South Region runner-up finishes in 2005 and 2006. In 2007, she helped guide FGCU to the Atlantic Sun Conference title in its first year in Division I.

Instead of that being the end of her volleyball career, it was only the beginning.

At the urging of her husband, Nick Sweat, she turned to pro beach volleyball. As proven by her status as a four-time Association of Volleyball Professionals Defensive Player of the Year (2013, 2014, 2016, 2017), her skills were well suited to the two-person game.

After competing in the 2016 Olympics, Sweat has now paired with three-time Olympic champion Kerri Walsh Jennings.

Like Sale, Sweat has stayed connected to the program at FGCU.

“When we played in the A-Sun Tournament three years ago, she flew up to watch us beat Kennesaw State in the championship,” Kavanagh said. “She’s a wonderful ambassador.”

While Sale and and Sweat have brought attention to FGCU as standouts in their respective sports, what really put FGCU on the map is undoubtedly DUNK CITY.

Before the Eagles made it to the Sweet 16 in the NCAA Men’s Basketball Tournament in 2013—becoming America’s “Cinderella” and earning the nickname “Dunk City” for their showy style of play—hardly anyone outside of Southwest Florida knew about FGCU. You couldn’t even buy an FGCU cap or T-shirt at a nearby sporting goods store.

With two wins in March Madness, that all changed. After destroying Georgetown in the opening round and then beating No. 6 seed San Diego State, FGCU became the first 15 seed to advance to the Sweet 16 in NCAA tournament history.

“It was transformational,” Kavanagh said. “It changed FGCU’s entire profile. Our ACT scores went up two points. It also allowed us to really grow in the community with awareness and pride.”

FGCU inducted Coach Enfield and the 2012-13 Men’s Basketball team into the Athletics Hall of Fame on Nov. 15, 2021. The other inductees will be honored at a dinner event on Jan. 14.

THE EVENT: Class of 2021 Induction Ceremony