“Farm to table” is the hottest concept to hit the restaurant world since chefs discovered their deep love of all things pork. But the cutting-edge idea of serving only foods from a 100 mile radius is most certainly marinated in history.

After all, it is how we humans lived for centuries. It was only a few decades ago when processed foods started to make life easier for the newly two-income-dependent families of the ﬁfties. In the middle of the last century we reached a gastronomic turning point: we lost hours of our days to additional work and the factories that employed us started making food products in the name of convenience.

Somewhere along the way agrarian amnesia allowed hundreds of miles to come between the farm that produces our food and the table where we consume it. But now the “farm to table” movement aims to shorten that distance and get local food on the plate. There is a particular challenge to this culinary concept in southwest Florida, but there are a few restaurants in the Estero area willing to take on the task. 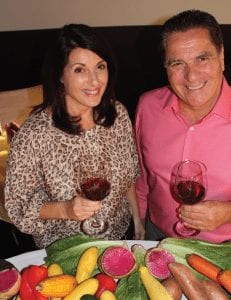 When Joe and Donna Scalli decided to turn their successful wine bar at Coconut Point into a full service restaurant called Southfork Grille, they weren’t really looking for a trendy concept. “I just thought we should do things the way they ought to be done. Get products from as close to here as we can and they’ll taste better. That’s what I’m after – having the food taste good,” says Joe; “I didn’t realize I was being hip.” Chuckling at the absurdity of simple food being a national foodie trend, Joe and Donna talk about one of their regulars.

“She came in after we changed the menu and pulled me aside,” recalls Donna. “She says ‘I don’t know what you’re doing differently, but what I just had was amazing. What did you change?’” Donna laughs. “That’s what we want. We’re not trying to prove any point or make any big statement. We’re just trying to bring in the best food we can ﬁnd to make the best dishes we can.” This is why they hired Chef Philip Donall whose passion for local ingredients borders on obsession. His joyful eyes sparkle as his hands pull apart the two semi-circles of a watermelon radish he just pulled from the cooler and sliced. “Look at that. Isn’t that beautiful?” He doesn’t wait for a response, “It’s amazing. That came from a producer a little north of here in Fort Myers. Such a cool place,” he beams. He and the Scalli’s had just gone to tour Rabbit Run Farm which grows a fair percentage of the produce in Philip’s kitchen. “They grow everything hydroponically because down here it’s the only way to get anything to grow in the hot summers,” he says.

Being in the extreme climate of southwest Florida sets obvious limits on what can be gotten locally and forces many “locavores” to expand their deﬁnition of local. Generally, the theory is that food should come from no further than 100 miles away. But, for Estero that would rule out the apple and a number of other fruits and vegetables. Even tougher, restaurants adhering to the 100 mile rule would be deeply impacted right in the main course: meat.

Jeff Mitchel is preparing to open a new farm-to-table inspired restaurant in December called The Local at Airport- Pulling and Pine Ridge Roads. He found a local beef producer who raises grass- fed cattle north of Fort Myers. “But to be served in a restaurant, the beef has to be processed through a USDA certiﬁed slaughterhouse. The closest one we could ﬁnd is in Ocala. So we would buy the animal here, ship it to Ocala, and then ship it back. It completely
negates the intention of minimizing our carbon footprint. So, no, we can’t do the 100 mile limit for some things,” Jeff explains.

The USDA certiﬁcation is required for any purveyor selling animal products to restaurants. Fish will ﬁgure heavily at The Local as there are a number of certiﬁed ﬁshmongers selling the Gulf’s ﬁnest. And of course local produce will rotate onto the menu as the seasons and availability change.

“We’ve found so many people locally producing so much — even cheese. It is surprising,” beams Jeff. “There is a lot going on right here so we will be able to be mainly local thanks to the people working so hard to make produce possible down here. It just tastes better in most cases, and you’re helping out the guy growing baby spinach and kale up the street by using your buying power locally.”

Jeff’s restaurant, the Local, is slated to open in mid December at Airport Pulling and Pine Ridge Road. Southfork Grille (formerly the Grape) is serving local-ingredient driven dishes for lunch and dinner at Coconut Point Mall.