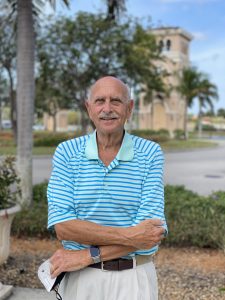 Howard Levitan, one of Estero’s first elected Village Council members and co-chair of the Planning, Zoning and Design Board (PZDB), has been involved in Estero’s governance since moving here in 2010. He is soon stepping down for a move back to coastal Maine.

“Howard Levitan will be greatly missed!” said Mary Gibbs, Estero’s director of community development. “He was an advocate for forward-thinking planning and innovative concepts.”

Levitan helped develop a vision for Estero’s future before the Village’s incorporation in December 2014 as a member of the Estero Council of Community Leaders (ECCL). After being elected to Village Council, Levitan spearheaded development of the Village’s first Comprehensive Plan and Land Development Code.

How it All Began

It wasn’t Levitan’s experience as a land use attorney that initially drew him into Estero’s planning. It was his internet marketing savvy, learned from 10 years as a consultant for country inns. Levitan had left his 25-year legal career for the idyllic life of a New England innkeeper.

In March 2010, the weather in Maine was dreary, so Levitan and his wife, Rebecca, started looking for vacation rentals in Naples. They found one in a nearby place called Estero. Two weeks into their vacation, they had fallen in love and were looking to purchase real estate. By August, they’d closed on a home in Estero’s Pelican Sound.

Levitan soon met the community’s ECCL representative, John Goodrich, who introduced him to ECCL leader Don Eslick. Goodrich was helping Eslick take the ECCL from a grassroots “leaders group” that met once a month to an advocacy organization with a board of directors and governance. Levitan helped the ECCL establish its first website and social media presence.

Soon Levitan dusted off his land use attorney skills as well, becoming the ECCL’s vice chair in charge of government relations and chairing the ECCL’s Planning Panel and Design Review Committee. Levitan was part of what Eslick called his “Diamond Group” commissioned to work on issues of economic development, recalled fellow member Bob Lienesch. He contributed greatly to the “transition book” for creating a new Florida city.

“Taking nothing away from any of the other directors, Howard was one of the most valuable ECCL directors in achieving incorporation,” Lienesch said. “He was a natural for the inaugural Village Council with his land planning knowledge, legal background, ECCL background and enthusiasm. He had worked so hard to establish the Village, I think he was driven to contributing his talents toward realizing our collective vision of a non-political government focused on maintaining and enhancing the long-term quality of life in Estero.”

When Levitan came to Estero in 2010, there were no businesses on the west side of U.S. 41 across from the new Coconut Point Mall, no Lee Health facility to the south, and no Hertz headquarters to the north.

Along Corkscrew Road east of I-75, Wildcat Run and Bella Terra were still being built. There were no residential communities further out — just mines.

“It was like the Wild West back then—Lee County was so pro-development,” Levitan recalled. “As a civic organization, our ideas of development were different. We were really about smart development and not wanting to allow things like sprawl.”

Part of the impetus for incorporation was to slow development and enforce more deliberate planning, he noted.

“The minute we got going as a Village, we put a six-month moratorium on development of the village center to create land use rules that enabled us to control development in this area,” Levitan explained.

The first development built under the Village’s new rules was the Genova community on Via Coconut Point. There’s plenty of development yet to come in that area with an upscale apartment complex and a continuing-care community planned; a 100-acre parcel is yet to be developed. And there’s talk of a civic center across U.S. 41 from Coconut Point Mall.

“It will only get better in the future,” Levitan said.

“His passion, hard work and commitment to making Estero a better place will have an enduring impact,” she said.