A Decade of Dedication, Enthusiasm and Growth

It’s not what you’d expect people to say about a university president, but these are the words often used to describe Dr. Wilson G. Bradshaw — known to most people as Brad. He retires this month after a decade of leading Florida Gulf Coast University. 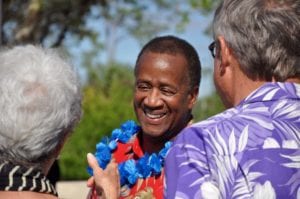 “I’m going to miss his leadership style and his energy and certainly his desire to be out among the students,” said FGCU Provost Ron Toll during a Luau on the Lawn in Bradshaw’s honor April 25.

The festive event was a fitting farewell for Bradshaw, who has often been sighted sporting a Hawaiian shirt around campus. In contrast to university presidents who lead invisibly from their offices, Bradshaw is a prominent figure in university life, typically at the front of the cheer section at every Eagles sporting event.

“He’s so approachable, and of course, he’s a wonderful cheerleader at the basketball games; he and Azul are always out there shaking it!” said Ann Hamilton, a member of the FGCU Foundation Board of Directors and daughter of the foundation’s founder, William Thomas Howard.

She credits Bradshaw for bringing in FGCU Foundation Director Chris Simoneau to lead successful fundraising campaigns, for enthusiastically reaching out to the greater Fort Myers/Estero community and for guiding FGCU through the recession without a single employee layoff. 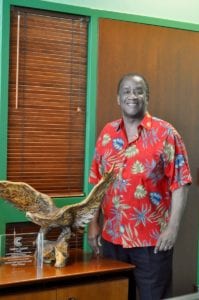 “He has a way of handling everything with grace, even under pressure, and his sense of humor is always present,” Hamilton said.

That sense of humor shined during Bradshaw’s luau greeting to students and staff, when he introduced himself as FGCU’s third president, its longest-standing and “best looking.”

The Board of Trustees unanimously selected Bradshaw to become FGCU’s third president on the university’s 10th anniversary. Now, as FGCU celebrates its 20th year, Bradshaw leaves a legacy of leadership during a period of rapid growth in student enrollment, degree programs, fundraising and building projects.

“When I first came here, I could look out the window and see nothing but trees,” said Bradshaw, gazing from his third-floor conference room at Edwards Hall, a view now populated by buildings. “It’s been tremendous growth and expansion, and it’s been exciting to be a part of it.”

When Bradshaw arrived in 2007, the only student housing was at North Lake Village, accommodating 1,984 of FGCU’s 9,388 students. The university has since grown to nearly 15,000 students and now houses about a third of those students on campus. Bradshaw admits he thought enrollment figures would be closer to 20,000 by the time he retired, but the university has been intentionally slowing its rate of growth. 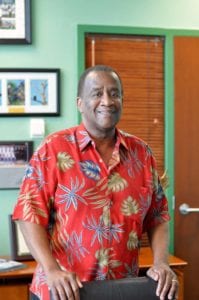 “We are bursting at the seams,” said Bradshaw, noting additional space needs for Science, Technology, Engineering and Math (STEM) programming. The number of FGCU students pursing STEM degrees has multiplied sevenfold during the last decade, from 1,164 to 8,103. FGCU also has added 15 degree programs, including the university’s first doctoral programs.

In recent years, the State of Florida has revamped funding formulas to put greater emphasis on student success. FGCU has responded by implementing incentives for students to take 15-credit-hour course loads and graduate in four years. These are challenges Bradshaw’s successor, Dr. Michael Martin, will face.

The good news is FGCU recently closed out a successful campaign to raise $100 million by its 20th anniversary. The university surpassed that goal, raising more than $122 million, including FGCU’s largest single donation of $10 million from educator and textbook author Elaine Marieb, whose name is on FGCU’s Marieb College of Heath and Human Services.

“We’re only 20 years old; we still have a lot of work to do, but the folks in this area are giving generously to help us progress,” Bradshaw noted.

With successful fundraising, FGCU has been able to double its scholarship offerings over the last three years, Simoneau noted. The university also is in the midst of expanding Alico Arena.

Bradshaw’s support of athletics extends beyond basketball to all FGCU sports.

“You have a president who’s at all our functions and knows the kids,” noted Women’s Soccer Coach Jim Blankenship. “He’s so approachable. He’s going to be missed.”

“He’s been phenomenal,” added FGCU Athletic Director Ken Kavanagh of Bradshaw’s enthusiasm and leadership. “He’s such a gentleman. Every day it’s about collaborating and understanding what’s best for the university and not just himself.” 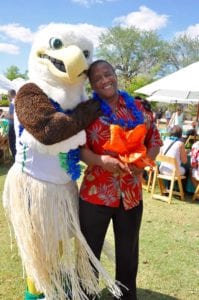 After Bradshaw retires this month, he and his wife, Jo Anna, will finish relocating to St. Augustine, where they have relatives. Bradshaw also says he hopes their three grown sons come through with more grandchildren (they currently have one).

FGCU’s third president will stay connected with the university and possibly return to teach in his field of psychobiology or to lead classes on higher education administration. Mostly, Bradshaw plans to enjoy fishing, boating and traveling.

“I want to be a little spontaneous,” he said wistfully, seeking a change from his highly scheduled days as a university president. “ I might just wake up on a Sunday, get cheap tickets and go somewhere for a week or two.”

As for his legacy, Bradshaw says he will let the students write it: “My legacy is still being built, and that will be told by the success of our graduates. I’ll let them write the legacy through what they do and how they use the education they get here at FGCU.”

FGCU: Then and Now

Here’s a look at FGCU’s growth and accomplishments during President Bradshaw’s decade of leadership: