There were tears as the Florida Everblades closed out an overtime victory against the Las Vegas Wranglers to win the ECHL Kelly Cup Championship last May, marking the Blades’ ﬁrst postseason championship in the team’s 14-year history.

Expect to see tears again as the Kelly Cup banner goes up at Germain Arena during the season opener against the Orlando Solar Bears October 12. “It’s what our die-hard fans have been waiting for,” said Head Coach Greg Poss, who is entering his third season leading the Blades, along with Assistant Coach Brad Tapper.

Everblades President Craig Brush found it difﬁcult to describe his emotions as he realized his team was ﬁnally bringing home the Kelly Cup. “After we won, it was just relief,” he said. 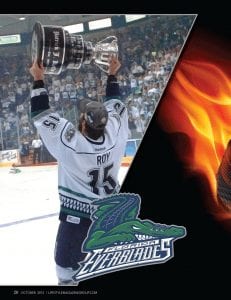 The 14-year yearning for a championship title was “like birthing a baby,” he added. Intense anticipation, wrought with anxiety, but he knew the big day would eventually arrive.

It was far from certain the 2011-12 team would be the one to fulﬁll fans’ longing for a championship title. At one point, just making the playoffs seemed an incredible feat.

“We were concerned in February whether we were even going to make the playoffs,” Brush recalled.
“We’d lost our goalie and couldn’t seem to be getting on a win streak.”

The Blades hit their lowest point as they struggled to break out from a nine-game losing streak. “Unfortunately, good teams have to go through bad times to become good,” Poss said. “The team developed a good balance between working hard, learning and having fun.” David Rutherford, the Blades’ leading goal scorer last season, recalled Poss telling the team to determine to win or go home early.

“I give a lot of credit to Greg to get us out of those funks,” Rutherford said. “I don’t think I’ve been on a team that went through as many struggles through the year. We found a way to get hot at the right time.”

Things started to look up in March, as the Blades went 12-3. They not only made the playoffs but posted a 15-3 record in postseason play, culminating with the Kelly Cup win. “It’s a matter of peaking at the right time and having the personnel at the right time,” Brush said. The ﬁnal game of the series packed plenty of excitement. Tied 2-2 in overtime, Ryan Donald passed to Matt Beca, who instantly sailed a perfect pass to rookie Brandon MacLean. As MacLean smacked the puck into the goal, Beca didn’t immediately realize it was the series ender.

“It was an unbelievable feeling,” he recalled. The team also owes a great deal of credit to goalie John Muse, who was named the series MVP. Muse saved 41 of 43 shots in the championship game, including a spectacular save to keep the game tied and force overtime.

“To have a goaltender of that caliber helps so much and really gives the team conﬁdence,” Poss said. “Off the ice, he is very intense, very focused and has the ability to mobilize the team.” Muse is moving up to the NHL this season, signing with the Carolina Hurricanes. Last season — his ﬁrst in the pros — Muse split his time between the Charlotte Checkers of the AHL and the Everblades.

This season, the Blades have been assigned a new goalie from Charlotte, Rob Madore. He played for the University of Vermont and appeared in ﬁve playoff games with the South Carolina Stingrays last season. Madore made 54 saves in his professional playoff debut during the Stingray’s 4-3, four-overtime victory over Gwinnett. Despite the Everblades championship win, the team will have more returning players than usual this season, thanks in part to an impending NHL lockout. At least a dozen players are expected to return to defend their title, Poss said.

“I can’t wait to go back to training camp to see everyone,” said Team Captain Matthieu Roy, entering his ﬁfth season with the Blades. The Quebec native was the ﬁrst to take home the Kelly Cup, which traveled throughout the summer to the hometowns of most Everblades team members. Roy tied his career high last season, posting 46 points. His coach and teammates credit him with solid leadership through his quiet willingness to do the “dirty work” on the ice.

After leaving Quebec, the Cup traveled through the hands of several players in the Toronto, Ontario, area, including MacLean, forward Matt Marquardt and defenseman Bobby Raymond, who had a barbecue with his buddies and some aspiring hockey players coached by his dad. Rutherford hosted a grand gathering of 200 friends and relatives when the trophy made its way to his native British Columbia. Although he has won seven championship victories in his career, Rutherford says the Kelly Cup victory has been the most special.

Perhaps it’s because the Cup shares a name with his late father, Kelly Rutherford, a one-time NHL hockey ref who sparked his son’s love of the game. The traveling trophy made its way to Rutherford’s home on the anniversary of his father’s passing. “It really was more touching than any other trophy I’ve ever won,” he said. The victory also was special because of the intensity of the Southwest Florida fans who have longed for a championship title for so long.

“The people of Southwest Florida, I’ve never seen a group of people want something as much as they did,” Rutherford said. “It was much more than a hockey championship to the people in Estero and Fort Myers. It was kind of overwhelming. I saw people crying. They’ve wanted this for 14 years.” Now the challenge will be to keep the momentum going as the Blades enter the 2012-13 season as reigning champs. Not only will rival teams be looking to dethrone them, the Eastern Conference is restructuring and adding more teams.

“This year, it’s going to be a more difﬁcult to make the playoffs,” Brush said. “Getting off to a fast start is going to be important.” Success will continue if the team remembers lessons learned through struggles, perseverance and coming together as a team, Poss said. “The year after a championship season is always a bit difﬁcult because you have a bit of that hangover,” he adds. “It’s going to be important to pick up from day one. If we handle it correctly, it will make us a better team.”