Millennials may be the “selfie” generation, but they also seek purpose. Sure, they like to have a good time, but today’s young professionals want to make a difference while doing it. 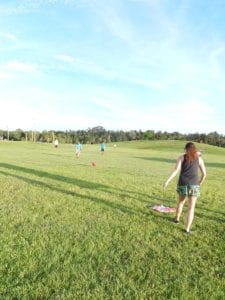 “We try to get creative,” says co-founder Kyle Carper, assistant general manager for Hampton Inn & Suites Estero. “We’re not just going to every bar in the area and having drinks and chit-chatting.”

That type of social may be common for other networking groups aimed at those in their 20s and 30s, but it lacks purpose. Plus, it can be awkward.

“I hate walking into a room and being intimidated and just standing there,” says Shady Wheeler, an event coordinator with TLC Marketing & Creative Services who co-founded YPN with Carper one year ago this month. 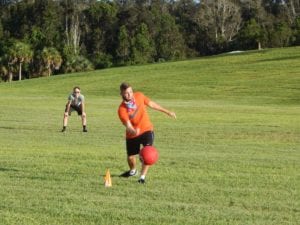 Wheeler and Carper both received a Rising Star Award at the Chamber’s 2016 annual luncheon. Soon after, they were separately approached by Chairman Gene Montenieri and then-President Lyne Graczyk about forming a young professionals group.

Chamber leadership recognized the need to reach out to young professionals, Montenieri explained, but the board didn’t want to create a group that was “an excuse to party.” Montenieri says he now feels like a “proud dad” to see the way Carper and Wheeler have organized the YPN along with board members Rachel Rango, a mortgage loan officer, and Brandy Minchew, who serves as liaison to the Chamber Board.

“I’m so impressed by these young people and their willingness to give back to the community,” Montenieri says. “They reach out, and they do things for the people of Estero. It’s so heartwarming.”

The first YPN community outreach event involved decorating the Christmas tree for last year’s Light Up Estero. As a master naturalist with the College of Life Foundation, Minchew mobilized the Young Professionals’ next outreach — a clean up of the Estero River last March. In June, they packed 938 meals for Meals of Hope and collected 239 pounds of nonperishable food items and feminine products for the pantry at Interfaith Charities of South Lee (ICSL). Last month, YPN partnered with the Ronald McDonald House Red Shoe Society to make gift bags for kids at Golisano Children’s Hospital of Southwest Florida. 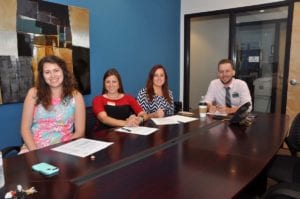 “We want people to know that Estero Young Professionals give back to the community,” says Wheeler.

The group has seen steady growth in the year since it started. Early events were attended by only a handful of young professionals, but now they draw up to two dozen.

In addition to community outreach, the YPN monthly events rotation includes social outings and educational programs. The traditional one-speaker format has been pushed out in favor of panel discussions where guest experts join the young professionals around a table for lunch and conversation.

“We didn’t want people talking at us,” explains Carper.

“We’re Millennials; we don’t like that,” chimes in Wheeler. “We wanted multiple voices speaking on a topic.” 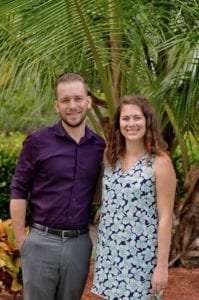 “I try to stress to the young people that networking is so important,” says Izzi, who teaches in FGCU’s Entrepreneurship Program. “You start to reach into the community and start opening up doors that might not open otherwise.”

Katkin and Crane, both FGCU grads, demonstrate it’s possible to start and grow a successful business without leaving Southwest Florida. They had to do it without the benefit of a Young Professionals Network, and both were glad to share what they’ve learned. Katkin encouraged the young professionals to write down goals and make a plan.

“A goal without a plan is just a dream,” echoed Crane.

Part of YPN’s mission is to combat the “brain drain” — local kids going to FGCU and then leaving town after graduation. YPN aims to be the interface between FGCU students looking for opportunities and Chamber member businesses who may employ them after graduation.

“We have a really great atmosphere for young professionals here in Florida,” says Wheeler, who notes that the Cape Coral/Fort Myers metro area ranks No. 1 on Forbes’ 2017 list of America’s Fastest Growing Cities. 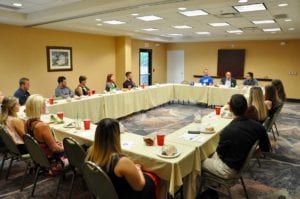 “I have hopes that we can encourage and inspire to keep our young professionals in our Estero area,” adds Minchew. “Estero is growing rapidly, and we are the future.”

Although social networking isn’t the primary focus of the YPN, it happens naturally through community service projects and social events like a recent kickball game at Estero Community Park.

“Doing it organically takes a lot of pressure off people,” says Wheeler.

YPN member Erin Burdette didn’t have many connections when she recently relocated from Missouri to develop business in Southwest Florida for MSW Interactive Designs, a web development company based in the Ozarks.

“This group is awesome to meet people my age who are also focused on their career and not just wanting to party, party, party,” she says of the Young Professionals. “I’ve made some great business connections and also great friends.”

Thanks to the generosity of three “pillar” sponsors, all Estero YPN events are free. Miromar Outlets is the sponsor for social events, including a “Speakeasy Social” at the outlet mall last April. Best Moving and Storage, the Chamber’s Business of the Year, has assumed sponsorship of the YPN education events, and College of Life Foundation is the YPN Community sponsor for service events. 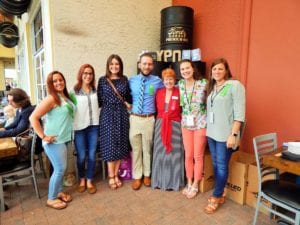 Although there’s no fee for events, that doesn’t mean there won’t be another form of “admission.” At Lunch and Learns, the admission is one question (written down and submitted anonymously) for the speakers panel. Other events may require donated goods for a charitable cause. Such is the case for the YPN’s upcoming “Tails and Ales” social at Ted’s Montana Grill in October. Admission will be supplies for pet owners who are down on their luck and don’t want to lose their furry friends. It’s something constantly in need by many ICSL clients who visit the food pantry in San Carlos Park.

Giving back brings purpose to the networking and chit-chat.