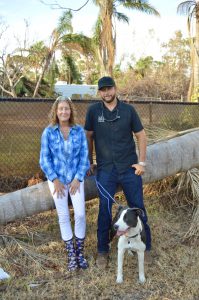 Heather Authement was having a “mini freakout session” as the water rose — rapidly — inside her family’s Estero River Heights home, pouring in through every drain and crevice. Authement, 20, was there alone with her Golden Retriever, Charlie, on September 28 as Hurricane Ian hit.

She climbed onto a couch with Charlie, but the sewage-filled water soon engulfed it. At one point, her car floated by, slamming into the house. With water up to her neck, Authement determined to climb out a tiny bathroom window — the only one high enough not to be under water. She pushed a frightened Charlie out first, then squeezed herself through, into the ripping winds and pelting rain.

Out of nowhere, a man on a Jet Ski buzzed over, scooping her and Charlie onto the watercraft. It was Chris Dagge, a neighbor she didn’t know at the time — a man whom many now call a hero.

Dagge already had made several rescues in flooded Naples Park with his military Humvee before returning home to rescue about 35 of his own neighbors, along with their pets. After the surge got too high for his rugged vehicle in Naples, he checked his home security cameras. The water was rapidly rising on his canal off the Estero River. By the time he got home, three feet of water had accumulated on the road. He had just enough time to move his vehicles to higher ground further down West Broadway near the Estero River Heights entrance sign.

He swam back to his house, grabbed his dog — fittingly named Storm — and boarded his Jet Ski.

About the time he got Storm to safety, Dagge got a text from his his neighbor, Debra Pikula: “We need help!”

Dagge jumped back on his Jet Ski. He found Pikula’s family huddled in their neighbor’s boat, the “Lucky Four,” still on its trailer.

“I had so much adrenaline and cortisol running though my veins because we didn’t know what would happen next,” said Pikula, who feared her family would drown if the boat tipped over.

Dagge transported them all — plus their three dogs and two bunnies — to higher ground, then went right back into the storm. 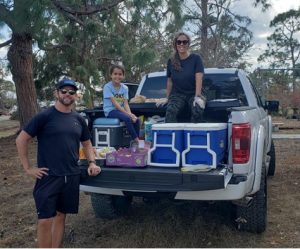 There were many more neighbors in need.

Dagge spent hours in the wind-driven rain – with gusts up to 150 mph — a knight on shining Jet Ski. He even rescued three English Bulldogs who were floating on beanbag chairs. Their portly build and squat faces make that breed unable to swim. At one point, one of the bulldogs fell into the water and sank like a rock. Luckily, Dagge was able to recover him.

“We didn’t have any casualties—human or animal,” he proudly reported.

There were other local heroes on Sept. 28, too. One neighbor with a two-story home welcomed in more than a dozen neighbors and their pets, most of whom got there by swimming to a second-floor window.

Authement and most of the other neighbors rescued by Dagge ended up at the Marathon gas station on U.S. 41 just north of Broadway, where the owner gave them dry T-shirts, food and beverages, along with shelter from the storm. Charlie got some beef jerky.

When Geoff and Michelle Gaudet went out to assess storm damage at their home in The Preserve, they felt fortunate to only have blown-out lanai screens. They knew others weren’t so lucky.

“I felt this overwhelming need to help,” Michelle said. “God put it on my heart go feed people.”

Hearing about flooded homes in older communities along the Estero River, the Gaudets loaded up their pickup truck with food and beverages and drove to the end of West Broadway — to Estero River Heights.

“The beach communities were getting all the attention. This little community on the river, it seemed no one even knew they were back there,” Michelle said.

Joined by friends from Fort Myers, Geoff and Michelle and their 10-year-old daughter, Mallory, started grilling hotdogs and hamburgers. Geoff took orders from people busy mucking out their homes, and a neighborhood teen volunteered to make deliveries on his golf cart. The next day, they came back with 30 Costco pizzas.

“People were saying, ‘Thank you for not forgetting us,’” Michelle said.

The Gaudets not only provided cold drinks and hot food to the grateful residents, they also listened, prayed and documented needs. Then they brought the plight of Estero River Heights and a neighboring mobile home community to the attention of Estero Forever Foundation Chair George Zalucki. He accompanied them on one of their “missions.”

“I have experienced first-hand the compassion and generosity this family provided to folks in need,” Zalucki said. “They were building relationships with people up and down the street.”

Geoff and Michelle also got their church involved. Calvary Chapel Gulf Coast sent a team of volunteers to help clear fallen trees and tear out damaged drywall. A week into the effort, Geoff told his wife, “I feel more connected to our community after eight days than I did in the whole eight years we’ve lived here.”

FK Your Diet, a restaurant located just north of Broadway Avenue on U.S. 41, also fed storm-battered residents. The restaurant handed out about 5,000 free meals daily in the days following the storm and even delivered to the mobile home community. 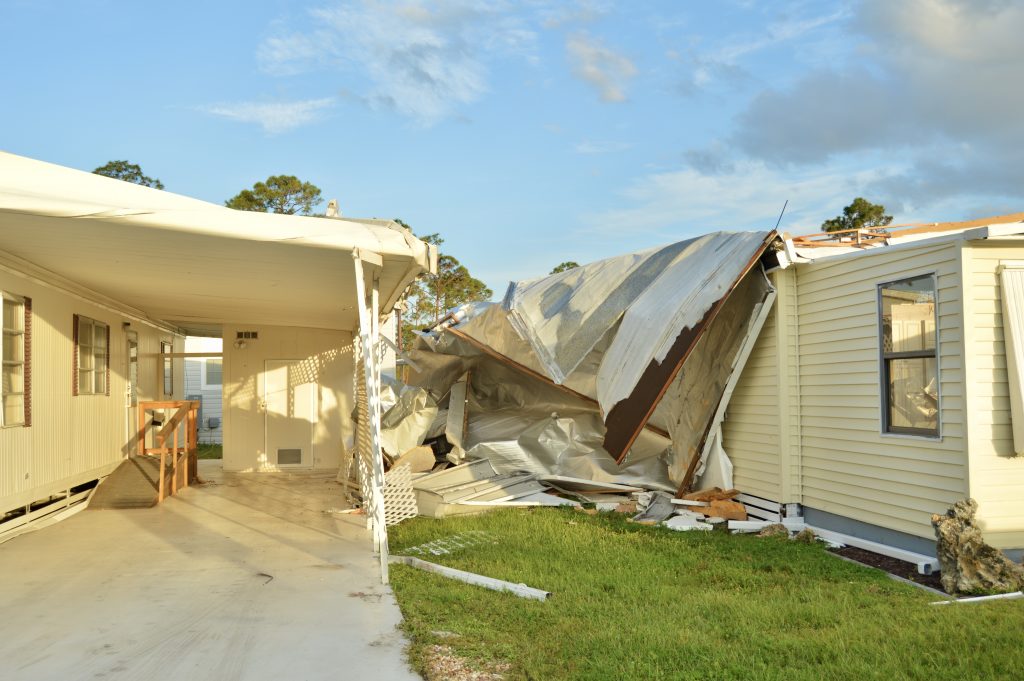 Estero Mayor Katy Errington said she’s glad to see so many individuals and organizations doing what they can to help.

The cleanup effort will be extensive, even in Estero. Errington personally documented a shuttle boat from Pelican Sound that somehow rode the storm surge almost two miles north to the edge of the marina at West Broadway’s Riverwoods Plantation—taking its boat dock with it!

Before the storm, Pikula, an avid gardener, described her backyard as “the envy of the neighborhood.” Now it’s all gone. So are treasured family keepsakes like her photo albums and her mother’s Bible with its handwritten notes in the margins. Her family is now living in an RV parked on their property.

“All my stuff is just toast. But what are you going to do?” she said. “Just be grateful you’re alive.”

The best way to ensure a donation helps folks in Estero is to donate through the Estero Forever Foundation (EFF), at www.esteroforeverfoundation.org. The Village of Estero collaborated with the foundation, the Estero Council of Community Leaders and Greater Estero Chamber of Commerce to create a special relief fund through the Collaboratory which will specifically aid Hurricane Ian victims residing in Estero. 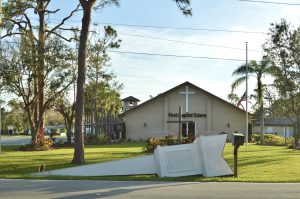 Through a form on the same website, Estero residents can request hurricane relief. This helps the Village streamline requests as the four partnering organizations collaborate on distribution of funds.

“Let us show our faith and love for all our friends and neighbors who are hurting,” Errington implored.

The mayor also reached out to Hertz CEO Stephen Scherr. As a result, Hertz Corporation, headquartered in Estero, donated $150,000 to the Collaboratory’s SWFL Emergency Relief Fund in addition to a $500,000 donation to the Florida Disaster Fund.

“Southwest Florida is our home, and Hertz employees live and work among areas hit hardest by Hurricane Ian,” Scherr said in a statement. “The impact of the hurricane is devastating, but the resilience of this community is inspiring.”

As she sat outside the Hertz Arena emergency shelter, Deborah Short recounted her day and night of terror on Sept. 28 as Hurricane Ian surged over Southwest Florida, flooding her Matlacha island home. Her harrowing experience included:

“The hurricane sounded like a freight train,” said Short, who was in the boat for more than 10 hours.

When she finally departed the skiff around 3 a.m., Short found the body of a dead woman just a few yards away.

“I needed to reach my children in Gainesville because I didn’t want them hearing about that and thinking it was me,” she said.

Despite the devastation and horror she experienced, Short thanked God and her “wonderful” late husband, Franklin, for the boat.

“Neighbors, police, firemen, nurses – they’ve been so good to me,” she added.

Short was among about 900 displaced Southwest Florida residents living in Estero’s two emergency shelters at Hertz Arena and the Estero Recreation Center in the days after the storm. Most have no place to go. 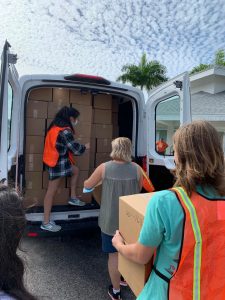 The Red Cross assumed management of the county’s shelters the week after the storm. Red Cross worker Jamie Bonn, from Seattle, arrived a few days after Ian struck. One of his first jobs was to distribute 200 cots, blankets and water to survivors staying in shelters.

According to the Red Cross website, most shelter residents are 70 or older, and many have complex health challenges. Many also came with pets. Most lost everything they owned.

All of Estero’s churches are doing what they can to help, from offering hot meals and prayer to sending out teams to help clean up the mess.

Efforts led by Ocean Church include collecting and distributing supplies, mobilizing volunteers and bringing the community together for a candlelight service. The church, located at 22100 S. Tamiami Trail, has been sending volunteer teams out in half-day shifts; sign up at www.oceanchurch.com/relief.

Anyone in need may request assistance on the website, and the church is collecting supplies including toiletries, nonperishable food, diapers, baby formula, tarps and plywood (no clothing, furniture, toys or blankets).

Lamb of God’s annual Thanksgiving outreach, Feeding the 5000, will look different this year.

“We expect need to go up,” said Director of Operations Wendy Smith. “Rather than a Thanksgiving meal, we are ordering nonperishable staples and providing items that will last for several days, not just one meal.”

Volunteers are needed on November 17 and 19 to stuff boxes and deliver them. Register at www.feedingthe5000.net/volunteer.

In the aftermath of Hurricane Ian, local nonprofits worked fervently to check on their clients and assess unmet needs. Those affected include many children who participate in the New Horizons of Southwest Florida after-school tutoring and mentoring program.

“We are still in the process of connecting with families,” Communications Manager Martha Perez said the week after the storm. “Unfortunately, some of the neighborhoods were completely wiped out, and many have lost everything and are in shelters at this time.”

Those wanting to financially support storm-impacted families may do so on the New Horizons website: www.newhorizonsofswfl.org.

Better Together also is asking for volunteers to help keep children safe during the rebuilding process. Volunteers are needed to drive supplies to families without transportation and to provide child care. To volunteer, donate or apply for assistance, visit bettertogetherus.org.

On a quiet October day two weeks after the storm, Dagge stood outside his home by the canal. A neighbor on the opposite bank saw him and shouted across the water, “Thanks for saving my life, man!”

Although Authement’s house was completely flooded by the eight-foot storm surge, she counts herself blessed to be alive. As her family mucked out their home, there was a miracle discovery. A Bible in a completely submerged nightstand was found totally dry. She knows God was watching over her and Charlie.

While emerging from this catastrophic storm will be a process, the heart of the Estero community is only growing stronger.

“It is times such as these that test the compassion, resiliency and resolve of a community,” Zalucki said.

Donate to the Estero Hurricane Ian Relief Fund at www.esteroforeverfoundation.org 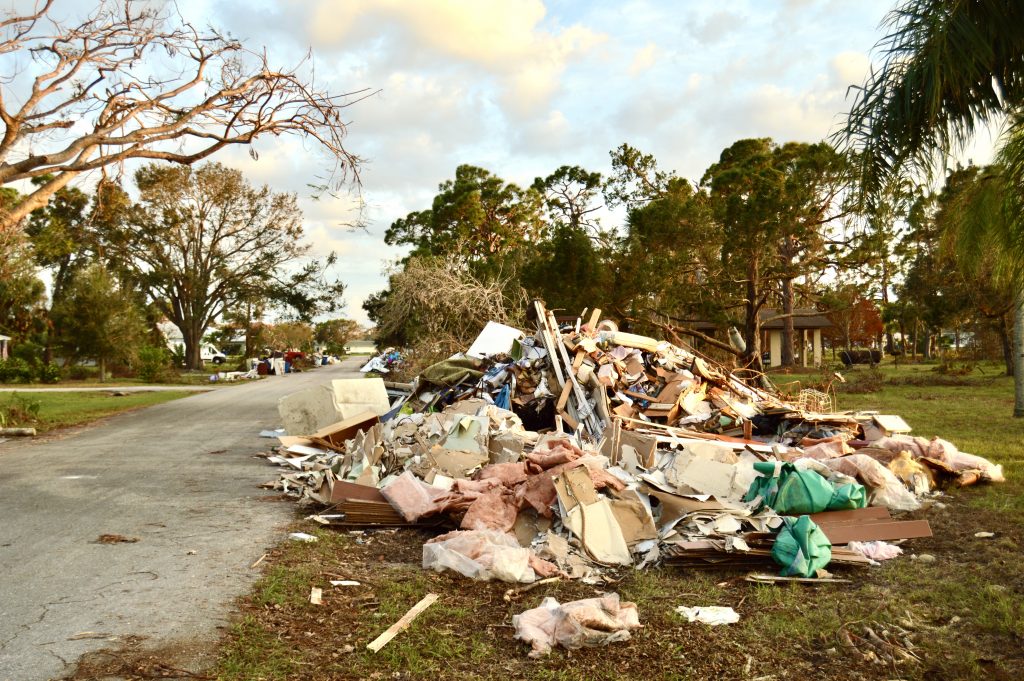