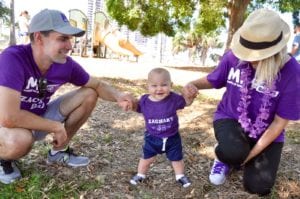 Neonatal intensive care nurse Jillian Miller is beaming with joy as she holds a beautiful baby on her hip. She’s not in the NICU at Golisano Children’s Hospital on this day. She’s out in the Southwest Florida sunshine at Centennial Park. And the baby on her hip? He’s not a newborn anymore. This blue-eyed, chubby-legged cutie is days from celebrating his first birthday — a milestone that seemed doubtful when Miller first met Zachary Pavich. 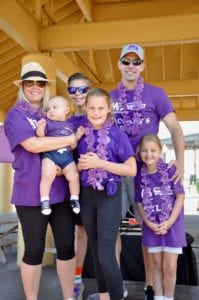 On June 3, 2017, little Zachary made his debut into this world six weeks too early. He was blue and lifeless — a stark contrast to the alert, rosy-cheeked boy now in Miller’s arms.
“I definitely did not expect him to look as good as he does right now,” says the nurse. “He is the epitome of a miracle child. With everything he faced, he should not even be here.”
Happy reunions like this take place throughout the expanse of Centennial Park during March for Babies, the 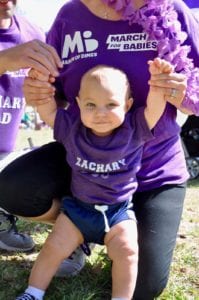 major annual fundraiser for the March of Dimes. This year, Lee Health teamed up with the venerated nonprofit to simultaneously host its NICU Annual Reunion and Graduate Parade on April 28. Zachary Pavich served as the event’s Ambassador Baby, as nearly 2,000 people walked in celebration of life and support of the March of Dimes mission to keep all moms and babies healthy.
As the March of Dimes marks its 80th anniversary (it was founded by President Franklin D. Roosevelt in 1938 to combat polio), Lee Health celebrates one year of operating the new Golisano Children’s Hospital of Southwest Florida. The new facility has brought many improvements for pediatric patients and their families, including private rooms in the NICU instead of a multi-patient ward with constant monitors and alarms going off, explains NICU Director Nancy Vossler. 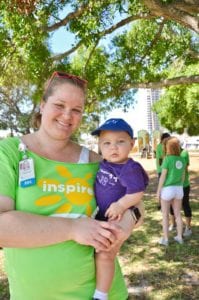 “Being in the NICU is very stressful, and parents go through a lot of emotions,” she adds. The new children’s hospital allows parents to stay overnight in their baby’s room and offers shower and laundry facilities, plus a business center, library, snack room and other places to “take a break.”
Zachary’s parents, Jason and Jami Pavich, remain thankful that this child-and-family-centric facility opened just in time for their baby’s emergency delivery. On the day of Zachary’s birth, Jami was enjoying her baby shower and celebrating with friends and family as they anticipated the arrival of her fourth child. No one predicted she would be rushed to the emergency room before the party ended.
“We prayed so hard,” recalls Zachary’s godmother, Lauren Ballotti, who was hosting the shower at her Bella Terra home that day. Zachary arrived at 8:58 p.m.; the Pavich family and their friends gathered at the hospital and prayed.
“On ‘:58’ of every hour, we would all stop what we were doing, take hands and pray — anytime we saw the number 58, but especially on the clock, on the hour,” recalls Jason, who proudly added the words “Zachary’s Dad” to his purple March for Babies T-shirt.
Other members of “Team Baby Z” also decorated their shirts. Zachary’s purple onesie displayed “58” in memory of the “team” who prayed for his survival one year ago.
“I’m just thankful we were here in Southwest Florida with Golisano,” says Jami. “I think it was the lifesaving equipment they used that preserved his brain from any more injury.”
Zachary received immediate cooling therapy to lower his body temperature and reduce the risk of permanent brain damage. Golisano’s NICU gets all of the “hard cases” in Southwest Florida as the only “Level 3” NICU from Tampa to Miami, notes Vossler. 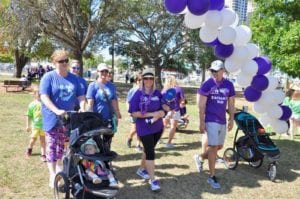 The Golisano NICU has a staff of about 200, and at least 25 percent showed up to volunteer at March for Babies and the NICU Reunion on April 28.
“It’s just so rewarding to come and see these babies thrive,” says Vossler. “It’s a happy day when we send a baby home, and it’s even happier when we see these kids come back and they’re as healthy as any other kid.”
Partnering with the March of Dimes for the NICU Reunion was a perfect fit as the two organizations both have a mission to prevent infant mortality and improve the health of moms and babies. Premature babies benefit from many medical breakthroughs made possible from March of Dimes-funded research, including surfactant therapy to help premies breath.
“The March of Dimes has been integral,” says Vossler. “With their research, we are able to save more babies’ lives.”
Golisano was one of 25 pilot hospitals which signed onto the March of Dimes initiative to end elective deliveries before 39 weeks unless medically necessary.
“Those last few weeks are so critical to the development of the child,” says Trent Howe, executive director of March of Dimes Southwest Florida.
March of Dimes also is responsible for the the infant “heel prick test” which screens for 31 birth defects. “The March of Dimes touches every baby that’s born,” notes Howe.
As Zachary Pavich celebrates his first birthday, his vibrancy is a testament to the the March of Dimes mission, the competency of Golisano’s NICU staff, and the faith of family and friends.
“We never dreamed we would be in that situation and that it could go from something so scary to such a blessing,” says Jason.