There is much to do at Estero Bay Olive Oil and Tea. You can enjoy a cup of mocha nut maté, try out various olive oils, or mix them with vinegars to see how your vinaigrette is going to turn out. There is plenty of seating to relax and take in the modern, yet inviting, atmosphere. But your time will be best spent talking to the owners, Doug Thompson and Diana Todorova. 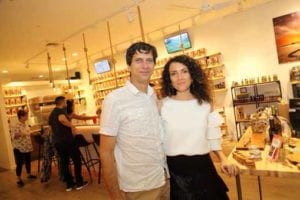 The two kindred souls will invite you to share tea and conversation, ranging from the healing properties of olive oil to flavors of tea good for making ice cream. Doug, who has previously owned and operated two similar stores, is passionate about the products he offers. Scientific research indicates the benefits of olive oil range from lowering the incidence of cardiovascular disease and some types of cancer, to potentially fighting dementia. However, the compounds that fight oxidation and lower bad cholesterol can only be found in “real” extra virgin olive oil (EVOO).

“Real olive oil should smell like freshly cut grass,” says Doug. It should list a “crush date”: the season of harvest and production. He adds that while colors can vary from yellow to deep green, the taste should always be a mix of pungent, bitter and fruity. 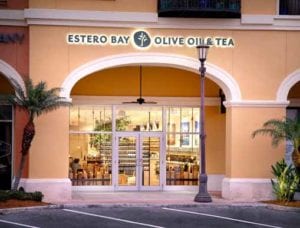 In fact, these are the three components on which olive oil is judged. At least six professional tasters must score the oil and proclaim it worthy to be called “extra virgin.” The gleaming vats of precious liquid at the store all carry a card with the name of the producer, crush date, and tasting scores of each oil. Some of the most awarded oils in the world are represented here, like the strong and peppery Spanish Hojiblanca “Melgarejo.” Another interesting choice, the “fused” oils are EVOO combined with fruits and veggies (think blood oranges or green chilis) at the time of crushing for a unique aroma and flavor.

Similar to a sommelier with fine wines, Doug guides customers through oil selections. Meanwhile, Diana (pronounced Dee-ah-nah) shares her love of tea: “I loved all kinds of tea as a kid; my grandparents used to pick herbs and mix them.”

Growing up in post-socialist Bulgaria, she studied journalism and made a career as a TV morning block reporter before coming to Florida in pursuit of the American Dream. She and Doug also work as architectural photographers, but what brought them together was their love for a connected lifestyle.

“When Diana came here, she missed having a place to just gather with other people and talk,” explains Doug. The cultural differences turned into a motivation for creating their one-of-a-kind enterprise.

The shop represents a curious blend of 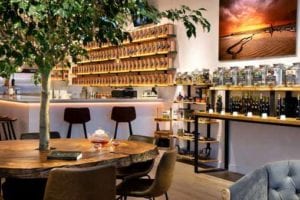 cultures and traditions: oil and vinegar from the Mediterranean, tea from China, a selection of Florida honey, and the fusion of ideas of a fifth-generation Floridian and an adventurous Bulgarian immigrant.

Doug’s parents are descendants of Sam Thompson, founder of the first telegraph office in Fort Myers. He grew up in his parents’ camera store and gleaned a love of entrepreneurship and photography. Diana’s career took her to more than 20 countries interviewing Bulgarian immigrants. She gave it up to establish a life in the United States.

“My friends thought I was crazy,” she says, “but I was ready to try something different.”

This fascinating couple chose to open their new business in Estero, not just because of sound marketing research, but also because Doug already lived here and loved it. Diana helped design the store — down to every container, bottle and label — and sourced ideas from Bulgarian designer friends.

Doug counts ironwork as one of his hobbies, so he zealously challenged himself to make all the iron-and-wood displays and tables in his metal shop. The top of a large counter-height table toward the back of the store used to be a display in his parents’ camera shop in the ’80s. A large, round tabletop made from a slab of a local camphor tree takes center stage. Repurposing and reinventing the old seems to mesh well with the modern feel of the space. A small, live tree cheerfully pokes through a hole in the camphor wood table, bringing in a welcome splash of green. 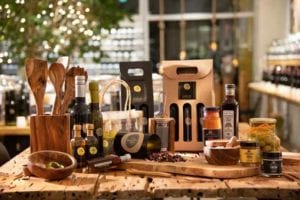 “The main idea behind this store is to make friends, to interact with them, to drink tea together and talk — and also, to share our vision of a healthy life,” says Diana.

The polyphenols in both olive oil and tea contribute to longevity, placing them high on the hierarchy of “superfoods.” The store is working toward a Blue Zones certification: a project connecting good food with community health and longevity.

The communal spirit of the enterprise is evident not only in the relaxed and talkative customers, but also through the events the shop hosts weekly. Tasty Tuesdays are an invitation to try various foods with different olive oil-vinegar combos. Every other Sunday, the store hosts High Tea, and sometimes they schedule educational presentations on health and food topics.

“We want to be a store that cares more about people, rather than profit,” says Doug. “We want to make it a place for the whole community.”