FOR DOUG MIENTKIEWICZ, COMING BACK TO SOUTHWEST FLORIDA AS FIELD MANAGER FOR THE MINNESOTA TWINS’ CLASS A AFFILIATE, THE FORT MYERS MIRACLE, IS IN MANY WAYS A HOMECOMING – BRINGING HIM FULL CIRCLE TO THE PLACE WHERE HIS PROFESSIONAL BASEBALL CAREER BEGAN.

“It’s a gem to have him back,” says Andrew Seymour, General Manager of the Twins’ Fort Myers operations. Mientkiewicz joins Hitting Coach Jim Dwyer and Pitching Coach Ivan Arteaga. Dwyer is one of the many familiar faces, having been the Twins’ minor league rover back when Mientkiewicz ﬁrst joined the organization after being drafted in 1995 following a sensational season with Florida State University. The Seminoles earned their ﬁrst ACC Championship that year, and Mientkiewicz was named the ACC Atlantic I Regional MVP. 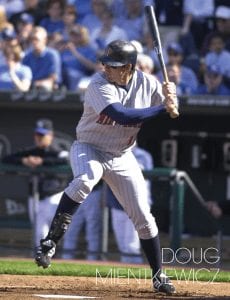 He now starts his career as a manager wearing the same team uniform in which he began his professional baseball career. “I’ve always considered myself a Twin,” he said during a Jan. 9 press conference to introduce him as The Miracle’s new ﬁeld manager. “I feel like I just blinked and 16 years went by, and I’m right back to where I was.”

After his ﬁrst season in the majors in 1999, Mientkiewicz joined the U.S. Olympic team for the 2000 Sydney Games, hitting the game- winning home run against South Korea in the semiﬁnals and helping American capture its ﬁrst and only Olympic Gold medal in baseball. He considers his Olympic experience the No. 1 highlight of his professional baseball career. Another highlight was making the out that ended the Boston Red Sox’ 86-year “Curse of the Bambino,” during the 2004 World Series. “Every kid dreams of winning the World Series,” says Mientkiewicz, one of just ﬁve American baseball players with both an Olympic gold medal and a World Series ring. He also earned the American League Gold Glove award as top defensive ﬁrst baseman with the Twins in 2001.

After nine years with the Twins organization, Mientkiewicz went to Boston in a four-team, multiple-player trade that landed him and Montreal Expos shortstop Orlando Cabrera on the historic Red Sox team. The transition went smoothly for Mientkiewicz, who knew many Red Sox players from spring training in Fort Myers. “We were a traveling reality show before they had reality shows,” he says of the championship team that started the series down 3-0 to the Yankees before storming back for four straight wins. “It was pretty exciting. That team was a perfect train wreck.” Before being traded to Boston, Mientkiewicz had settled in Estero. Although he was awarded the starting ﬁrst base job for the Twins in 2001, his permanent residence was in Pelican Sound.

“We were in Estero when the only thing they had was Pelican Sound, and they just got Bahama Breeze, so a lot has changed since then,” recalls Mientkiewicz. “You could get from Estero, up 41, all the way to the stadium in about ﬁ ve minutes.” Born in Toledo, Ohio, and raised in Miami, Mientkiewicz considers himself a Florida boy, having played for Westminster Christian School in Palmetto Bay, a baseball mecca that also produced World Series winner Alex Rodriguez. Mientkiewicz’s broad-reaching background is a huge draw to The Miracle, Seymour says. He has connections with fans in Miami and Ohio, as well as fans of FSU, the Twins, the Red Sox and the ﬁve other professional teams he played for: the New York Mets, Kansas City Royals, New York Yankees, Pittsburgh Pirates, and Los Angeles Dodgers. “He has tremendous reach,” Seymour notes, adding, “He’s a hustler. He’s a real get-dirty, get-after-it kind of guy. He’s a leader in the clubhouse and a character guy.”

Mientkiewicz made his coaching debut last season as hitting coach with the Ogden Raptors, a Los Angeles Dodgers afﬁliate in Ogden, Utah. He was eager to head back “home” to Fort Myers to take the top job for The Miracle, replacing former Miracle manager Jake Maurer, who has moved to the Twins’ newest Class An affiliate, the Cedar Rapids Kernels. The Miracle’s season kicks off April 4 with a home opener against the Bradenton Marauders. Mientkiewicz says his goal as a manager is to develop players both on and off the ﬁeld.

“The best part of coaching is when you see a player grow, and that has nothing
to do with his athletic ability,” Mientkiewicz says. “You start to see a maturity and see them take it a little more serious every time they step onto the ﬁeld. This is their career. It’s part of becoming a man.” Players have to want success bad enough to work for it, he says. That was a lesson he learned early from his all-time favorite coach, his dad, Len Mientkiewicz. “My dad used to say, ‘100 swings a day or you’re cheating yourself,’” Doug recalled. “That’s the way it was since I was ﬁve years old. He was and always will be my No. 1 manager. He taught me the basics and taught me how to work.” Now it’s Mientkiewicz’s turn to pass that work ethic onto his son, Steel. At age 7, Steel is already a huge sports fan and loves hanging around the ﬁeld and in the clubhouse with the players.

“He’s looking forward to getting thrown in the garbage can by my guys,” Mientkiewicz jokes. Seymour made sure Steel had plenty of Miracle baseball caps, properly outﬁtting him to cheer for his dad’s new team. He and Mientkiewicz’s wife, Jodi, will drive up from the family’s home in Islamorada for visits throughout the season. Coaching in the minor leagues is a challenging job, as the top priority is developing players, Mientkiewicz said. “Being a minor league manager is tough because if your players do really well, they move on,” he says. “As a fan, you want to watch your team win – and at the Twins organization, we feel winning is a big step to becoming a major league player – but I’m not going to put it ahead of somebody’s health or developing somebody else. It’s deﬁnitely challenging as a manager.” Many players already know Mientkiewicz and are excited to learn from him, Seymour says. “On ﬁ eld and off, we’ve got a great deal of talent ready to entertain and dazzle the people of Southwest Florida,” Seymour adds. “Needless to say, we are all tremendously excited for another exciting season of Miracle Baseball.” The Miracle’s regular season runs from April 1 to Sept. 1. For a complete schedule and player roster, visit www.miraclebaseball.com.