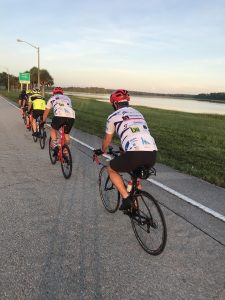 Cyclists ride near the airport

Frank Schuler, 81, recently captured some media attention for cycling a whopping 3,500 miles last year—all in Estero. He wasn’t so much going for a record as he was simply engaging in a daily habit. Regardless of weather changes, he religiously rides his bike 10 to 12 miles each day in his neighborhood, Cascades of Estero, and often beyond the gates, too.

His neighbors are accustomed to seeing him each morning – rides typically start at 8:30 a.m. – and he frequently stops to share stories about neighborhood happenings and concerns. As a member of the homeowner’s association board, Schuler finds these chats a great way to learn about pot holes in the road, sprinklers not working, and the needs of residents—many of whom are living solo in this 55–plus community.

His Trek bicycle with seven speeds was purchased when he moved to Estero permanently a couple years ago. With his helmet, bicycle gloves and a good bike horn, he’s ready to ride.

“Usually I ride in the Cascades, but I have my circle routes that include the new bike lanes and sidewalks on Estero Parkway, a short jaunt along U.S. 41 and another along Corkscrew,” Schuler said.

He finds mornings the safest time to cycle, and he remains alert to his surroundings. His wife still worries if he’s out more than a couple hours and stays in contact by phone. Thankfully, his ride along Estero Boulevard has improved in the last year with the addition of bicycle lanes and walking pathways along the newly upgraded boulevard. Corkscrew Road also will see bike route improvements with Lee County’s road widening project. And the Village of Estero’s bicycle/pedestrian master plan calls for systemic development of bike lanes and paths connecting all population segments.

Estero residents and avid cyclists Joseph and Jane DuBois opened the first Trek bicycle store in Estero and now own 14 Trek franchises in South Florida. Visitors to the store can check out maps of local cycling routes and find information on cycling groups. The DuBoises hire knowledgable, enthusiastic team members who can help cyclists of all skill levels bike around the region comfortably and safely.

Cycling has seen phenomenal growth at the same time Southwest Florida roads have become more congested. DeClemente warns bikers to carefully follow traffic laws (riding in designated lanes in the same direction as traffic) to keep in sight of drivers.

“I previously worked in the exotic car industry and drove fast cars on the track. I didn’t become a better driver until I became a cyclist,” he added. “Drivers don’t expect cyclists and therefore don’t see them.”

Reflective clothing and tape are an added safety measure. And a highly protective helmet is a must. At the top of the line, Trek sells a helmet with wave cell technology claiming to lower the risk of concussion to 1.2 percent in the event of a bike accident.

DeClemente’s pet peeve is shrubbery at the entrances and exits of shopping centers that obscure sight lines — for drivers to see approaching cyclists and for bikers to see exiting vehicles.

The Village of Estero and Lee County have prioritized creating bicycle-friendly roads and trails.

In February, the Village approved several measures supporting cycling. The first was to include Estero in a proposed, inter-state bike route that the U.S. National Bike Route System is considering, which would run from Rochester, NY, to Miami. The plan includes a section through Estero traveling down Ben Hill Griffin Parkway, crossing over Estero Parkway, then traveling down Three Oaks Parkway.

In the nearer term, the Village approved a consulting firm to design bicycle and pedestrian improvements along Sandy Lane and Broadway East which would serve as a connector to Broadway West, Corkscrew Road and Via Coconut bike/pedestrian pathways. 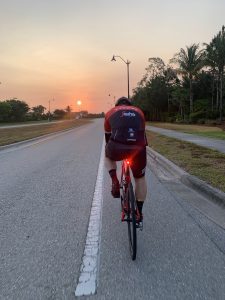 Another consideration is converting Estero’s unused railroad tracks into a multi-purpose recreational path. Rails to Trails projects are gaining steam across the nation. Because railways are privately owned, interested communities must engage in considerable planning, advocacy and negotiations, said Ken Bryan, of Rails to Trails Conservancy-Florida. Rail companies may still have an economic interest even if the tracks haven’t been used for years.

For now, a favorite route for avid cyclists in Estero is the well-marked Three Oaks Parkway, which connects to routes from Fort Myers down deep into Naples. Local vehicle drivers are usually aware of frequent cyclists on this route.

A plethora of off–road trails also exists throughout Estero and Lee County. The Lee County Metropolitan Planning Organization has a free map which includes biking regulations and safety, as well as local routes. Would-be cyclists can also check out online resources: Bikemap.net has specific Estero routes, and Mobilemaplets.com has Lee County regulations and map routes.

“Riding a bike gives me a sense of freedom like nothing else,” said DeClemente. “Riding makes you part of real life – riding around the neighborhood, waving at neighbors, 30 minutes of exercise before going to work or at the end of a challenging day. It’s connecting with nature, friends, family and the wonder of year-round cycling in Florida. Whether alone or in bicycling groups, whether leisurely or at greater speeds, there’s enjoyment available for everyone.”