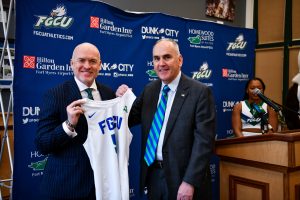 Whether it’s meeting with donors, boosters or members of the Boys & Girls Club and talking about fast-tempo basketball, attitude and gratitude — or faith and family — Pat Chambers is at home.

The roots of these thoughts were cultivated shortly after buying a home in Naples in 2014. Chambers drove around the Florida Gulf Coast University campus and said to himself, “Wow, what would it be like to coach here?”

And now, here he is. The circumstances couldn’t have been foreseen. But Chambers’ journey resembles the lyrics from a Rascal Flatts song, “God blessed the broken road that led me straight to you.”

“It was surreal,” Chambers said as he returned down those FGCU roads for a press conference announcing him as the Eagles’ fifth men’s basketball coach on March 14, 2022. Just 18 months before, the former Penn State coach wondered if he’d ever be a head coach again after what he thought were supportive comments to a player led to his resignation.

“I couldn’t believe this was happening,” Chambers said of the FGCU job. “But that’s what happens when you put it in the universe.”

“I am appreciative of how important it is, with us still in our infancy, for our coaches to be very connected in the community,” Kavanagh said. “Pat’s vivacious personality is already into that thought process. He’s been doing things since Day 1 with our donors, whether it’s one-on-one or in a group setting. He’s been great with the community.”

Craig Martin, who has been an FGCU booster for more than six years, saw an event for a handful of friends turn into an event for 35 people with Chambers at Gateway Country Club.

“Ed said, ‘This man is for real, he’s honest, and he runs a good program,’” Martin recounted.

As Chambers spoke, boosters fed off his enthusiasm and asked a lot of questions.

“That man is dynamic and energetic,” Martin said. “I would say we sold a few season tickets that day.”

‘Educate Yourself and Grow’

Chambers had Penn State on the cusp of being a regular in the NCAA Tournament.

After just missing the Big Dance in the 2017-18 season, the Nittany Lions won five straight games for the National Invitation Tournament title.

But the global pandemic wiped the event out.

The next season, during a pre-season practice, Chambers sensed one of his top players, Rasir Bolton, was struggling. Bolton told The Undefeated that he recalled Chambers saying, “I want to be a stress reliever for you. You can talk to me about anything. I need to get some of this pressure off you. I want to loosen the noose that’s around your neck.”

Chambers publicly apologized to Bolton and his family after the story’s publication. However, Bolton left the program, and, after an investigation, Chambers resigned on Oct. 21, 2020.

“This has been an incredibly difficult year for me and my family, and we are in need of a break to reset and chart our path forward,” Chambers said in a press release.

Shortly after his resignation, Chambers took a course with University of Pennsylvania Professor Karen Reivich, PhD. She’s the co-director of the Penn Resiliency Project at the Positive Psychology Center and teaches courses in positive psychology and interpersonal relationships.

Chambers also reached out to collegiate administrators like Kavanagh, asking what he needed to do to become a head coach again. Their message: Get back in the saddle. Soon.

“In one of my discussions with him, I told him to get back into coaching, whether it was as a volunteer or coaching in some degree,” Kavanagh said.

Meanwhile, relatives and former players reached out to Chambers and told him not to quit.

“I come from a large family, and they said, ‘You can’t let this detour you from what you’re becoming,’” Chambers said. “And a lot of former Penn State players reached out and said, ‘You helped us. The next generation needs you to help them.’ 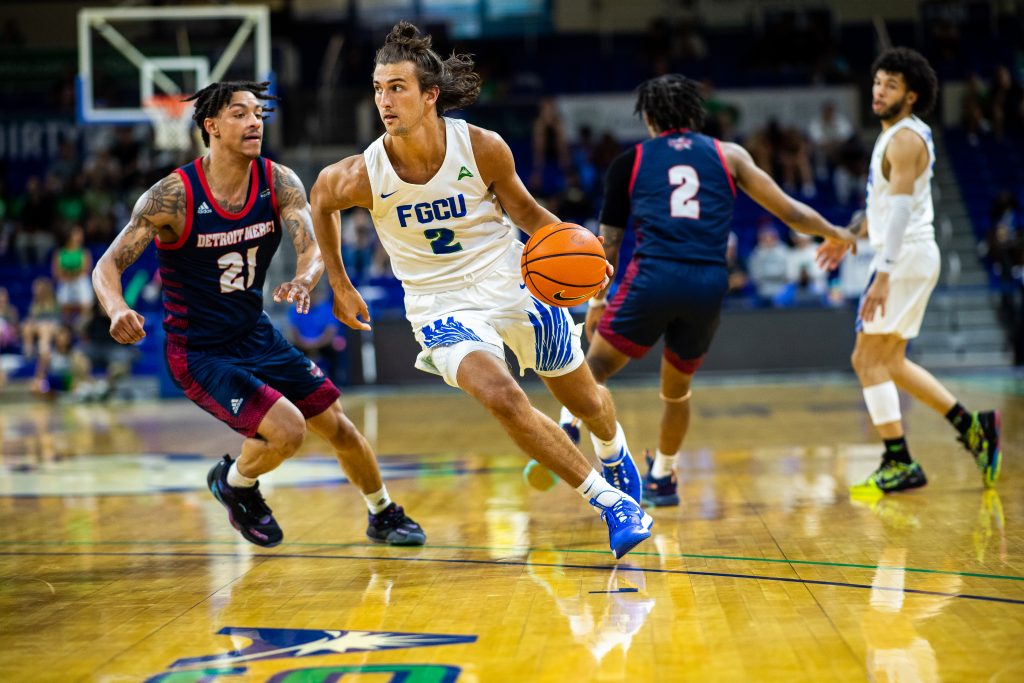 As he went on this journey of self-discovery, Chambers, 51, came to a place he knows well — Naples. He had been vacationing there for 30 years and bought property in Naples eight years ago. When he left Penn State, his family decided to live there full-time.

The coaching lifeline Chambers needed came in November 2021 when La Salle University hired Chambers as a volunteer advisor. A month later, he became a bench coach. At the end of the season, LaSalle went on a four-game winning streak. About this time, Kavanagh began his search for a new coach after parting ways with Michael Fly.

Chambers soon gave him a call. 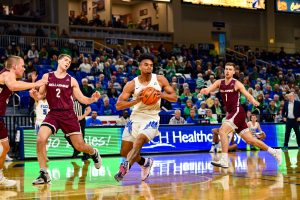 Kavanagh had followed Chambers’ situation because his son, Quinn, worked in development at Penn State. Before hiring Chambers, Kavanagh called many people who had worked with Chambers, including former Penn State player Lamar Stevens, now with the Cleveland Cavaliers, and former Villanova Coach Jay Wright, who said Chambers would be a “great fit” for FGCU.

“The more I was doing my background, it was quite apparent what Pat did was an aberration,” Kavanagh said. “It was overwhelming how many people spoke on his behalf…and there was not any other candidate who came close to him with his pedigree.”

Chambers had experience with a mid-major program, and like former FGCU Basketball Coach Andy Enfield — who took the Eagles to the Sweet 16 — Chambers took Boston University to the NCAA Tournament in his second year.

“I’d be lying if I said I knew I’d be a head coach again,” he admitted. “It did happen a lot quicker than expected.”

And Stevens lent his support by working out with FGCU players during the summer.

“He could’ve done this anywhere else,” an appreciative Coach Chambers said. 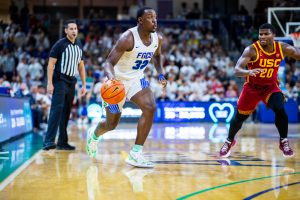 Recalling FGCU’s past successes, Chambers said he’d like to return some of that “Dunk City” magic while also taking a page out of the women’s program book by making a lot of three-point shots.

Chambers’ eagerness to connect with fans and donors is important for a program which has seen a decline in men’s basketball attendance the past few seasons.

Kavanagh, who oversees one of the most successful non-football athletic programs in the country, said FGCU has the potential to develop the clout of Creighton or Gonzaga, and having a coach with an infectious personality like Chambers is crucial.

“Resources can spin off that. That can help the entire athletic department,” Kavanagh said. “It’s been difficult. There was the pandemic and then inflationary aspects. It’s important we have someone who can galvanize our community.”