In the early period of Estero’s development, startup advocacy groups, particularly the Estero Council of Community Leaders (ECCL) and the Estero Chamber of Commerce, had relationships often described as competitive rather than cooperative. And when the Village of Estero incorporated five years ago, some folks said the ECCL should just fade away. Both the Chamber and the ECCL have reinvented themselves in rece

nt years and have been rising in relevancy. And the Village has taken notice, seizing opportunities for new partnerships.

“I think 2020 is going to be the start of the big collaborative movement,” says Jim Tatooles, who serves in roles of leadership with all three entities: the Village’s Planning and Zoning Board, the ECCL’s Community Development Advocacy Council and a Chamber-led economic development team. “It’s an exciting time. We’re all working together now.”

Estero is in a period of extreme growth with new hotels, apartment complexes, senior living facilities, grocery stores, medical offices and more popping up at rapid pace. New construction in 2019 added $120.6 million in taxable value to the books, which will generate about $93,000 in additional tax revenues for Estero. 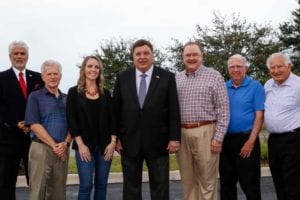 The Village’s commitment to “government lite” and keeping taxes low (now the lowest in Southwest Florida) necessitates partnering with other organizations to help shoulder the workload.

“That spirit of collaboration is really by design and is coming to fruition because of the hard work of a lot of people,” says Village Manager Steve Sarkozy.

The process of creating Estero’s first master plan took the brainstorming power of many Estero citizens and institutions. Along with the ECCL and the Chamber of Commerce, Estero leaders are collaborating with Florida Gulf Coast University (FGCU), the School District of Lee County, Lee Health, local churches, nonprofits — whoever has a vested interest in Estero’s success.

“The game plan is going as planned,” says Sarkozy. “We’re staying the course: slow and steady growth of our visions in partnership with all of the local organizations.”

The longterm vision for Estero includes a village center offering public enjoyment of the Estero River, and possibly an arts district, located on the 62 acres the Village purchased in January 2019 at the northeast corner of U.S. 41 and Corkscrew Road. The new Estero Community and Economic Development Team, under the Chamber’s umbrella and financially supported by the Village of Estero, is working on strategies for bringing the community’s vision to life.            ‘

“This could be a draw for Estero like Fifth Avenue is for Naples,” observes FGCU economist Christ Westley, who serves as an advisor to the team.

The team, which includes a representative from Lee Health, also is looking at new recreational opportunities for Estero and working to develop the “medical corridor.” As Lee Health celebrates the one-year anniversary of its Coconut Point facility, there remains another 43 acres it owns across the street, at the northwest corner of U.S. 41 and Coconut Road, yet to be developed. Competing to build a hospital in Estero is HCA Healthcare, which purchased 100 acres north of the Hertz headquarters in January 2019.

“There are many positive things taking place that will improve the quality of life, and quality of life is a prerequisite for economic growth,” observes Nolen Rollins, Chamber chairman and co-chair of the economic development team.

‘Nothing better out there’

The team’s other co-chair, Gary Bonvillian, is among the growing number of new Estero residents. His history with the community dates back to 1996 when he helped start what would eventually become FGCU’s Small Business Development Center. After a 40-year career in collegiate administration and economic development, Bonvillian and his wife, Mary, recently retired to Bella Terra in east Estero. 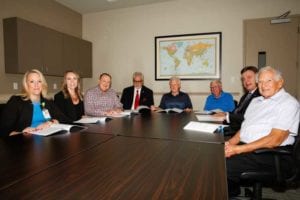 For the last four years, the Bonvillians have taken RV trips all over the U.S., and every time they return, Mary asks her husband: “Did you see anywhere else you’d rather be?” Every time, his answer is “no.”

“We travel 10,000 miles a year, and there’s nothing better out there,” declares Bonvillian. “We live in a desirable region.”

Beyond the obvious advantages of the weather, says Bonvillian, Estero offers easy access to an international airport, a “fabulous” tax base, accessibility to good healthcare options and a growing university to fuel local companies’ needs for talent.

The Southwest Florida region tops national lists for growing economies, and Estero is central to that growth. The evidence can be seen driving around the village as new construction abounds. SpringHill Suites by Marriott is the newest hotel to dot the landscape, near the interstate. Three more hotels have been approved but not yet constructed: one at Coconut Road and U.S. 41, one at Miromar Outlets and one at Coconut Point.

As Tatooles puts it, Estero has housing for all stages: hotels for initial visits to the area, condos and homes when someone is ready to relocate, and finally, assisted living communities when age inevitably begins to take its toll. Construction on The Colonnade of Estero, a “life plan” community, is scheduled to begin this spring. Buildout will start with apartment homes and independent living units. Then will come assisted living, memory support, skilled nursing and short-term rehabilitation services. All told, the facility is projected to serve about 2,000 people a year, reports Kevin Ahmadi, area Director of Expansion for Volunteers of America. VOA is making this $121 million investment in Estero to fill the need for continuing care of an aging population, he says.

More than 100 new businesses opened in Estero in 2019, according to Chamber of Commerce CEO Sarah Newcomb. Most were small businesses. To better serve them, the Chamber has invited FGCU’s Small Business Development Center to set up shop at the Chamber offices.

“A lot of people walk in who are planning to relocate to Southwest Florida and move their business here,” says Newcomb.

On the other end of the spectrum, the largest business to impact Estero in 2019 was Lee Health Coconut Point. The number of primary physicians has doubled since opening, and the facility currently employs about 300 people, reports Lee Health Vice President Alex Greenwood. The emergency department receives more than 1,000 visits a month, and the Healthy Life Center continually adds programs like massage therapy, yoga and cooking classes.

Greenwood’s community engagement includes serving on the Estero Chamber’s board of directors and acting as an advisor to the economic development team.

The Estero Chamber works with other local economic development groups like the Horizon Council of Lee County to address regional issues. At the top of that list is water quality.

“Everybody is coming together to try to solve the water issues so we will not have the big impact on tourism we did last year,” says Rollins.

FGCU is leading the way with its newly opened School of Water, and the Village of Estero has contracted with the school to conduct testing of the Estero River.

Nothing seems to be slowing the rapid population growth. Tidewater by Del Webb, an active retirement community north of Miromar Outlets, is nearing build out, as is the Genova condominium community at Corkscrew Road and Via Coconut. 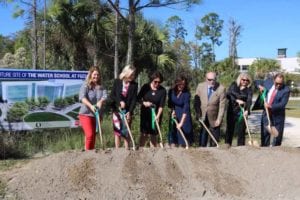 Several apartment complexes are in the works for 2020 and beyond. The Reserve at Coconut Point (formerly Estero Parc) recently commenced construction behind The Shoppes at Estero Grande on U.S. 41. Edera, planned for the southeast corner of Via Coconut and Williams Road, just picked up its building permit for 180 apartments, and another 300-unit apartment complex is being proposed west of Genova on Via Coconut.

To accommodate all the new residents, two supermarkets, Aldi and Sprouts, are currently under construction. Recognizing the desirability of being in Estero, the developer of a proposed 21-lot community on Coconut Road west of U.S. 41 has asked to have the 10-acre property annexed in what will be be the first extension of Estero’s boundary lines.

Along Corkscrew Road, a 350-unit apartment complex is going through the zoning process near Lowe’s. Further east, a new gated community, Corkscrew Crossing, has been zoned for 590 single-family homes. 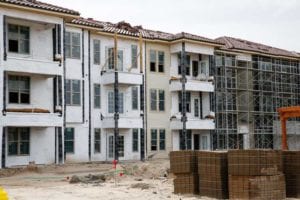 Several other new residential communities, including the massive WildBlue, are planned just east of Estero’s boundaries, eventually adding more than 5,000 homes along Corkscrew Road. To serve this growing population, Estero Fire Rescue is building a new fire station, the school district is building two more schools in Estero, and infrastructure improvements are being made to roads.

Most of these new homes are priced above $400,000 and offer resort-style amenities, many featuring “West Indies” style architecture that’s growing in popularity, says Joe Pavich, Sr., past president of Bonita Springs-Estero Realtors. Existing gated communities in Estero are trying to keep up. Many are overhauling their clubhouses and adding amenities like pickleball.

The hottest homes on the market these days are those priced below $350,000, says Pavich, indicating a need for affordable housing. These homes are rare in Estero, representing less than 20 percent of what’s currently on the market.

Regional economics and ‘the dog’

There is one caveat to all the enthusiasm surrounding Estero’s rapid growth. Think of the national economy as a dog, says Westley, director of FGCU’s Regional Economic Research Institute (RERI). Florida is the tail, and Southwest Florida is near the tip of the tail. When the dog is happy, the tail is up, and that tip is wagging. It’s the most expressive part of the animal. But when the dog is sad, the tail lowers, and the tip drags the ground.

“Data from our region indicate we tend to overheat during the boom, and then it overcorrects during the bust,” observes Westley. “The question is, when will the bust come?”

The U.S. is enjoying the longest economic expansion period in the nation’s history, having lasted more than a decade. Economists like Westley have been predicting a correction for years, but politically motivated policies creating “cheap money” may continue a while longer, he says.

Meanwhile, few people in Southwest Florida seem worried. The RERI’s most recent Executive Business Climate Survey collected responses from 129 local executives. Ninety percent said they expect the economy to improve or stay the same in 2020. Nearly half increased employment in 2019, and about the same percentage expect to increase employment in 2020. Additionally, 56 percent plan to increase investments in the coming year.

No matter what happens on the national level, most folks in Estero are confident our Village will continue to thrive in 2020.

“I am very optimistic because I have great confidence in the decision makers I see,” says Bonvillian. “We have a lot of brain power at work here. To work around dynamic people with dynamic ideas is invigorating.”