It’s yet another exciting time to be a Florida Everblades fan. The team comes off its 21st ECHL season with 50 wins for only the third time in club history, plus the Blades qualified for the conference finals for the second consecutive year. This was just the second time in team history that they’ve made back-to-back appearances in the conference finals. But there’s so much more than the awesome product on the ice to be thrilled about as the Everblades head into the 2019-20 season. 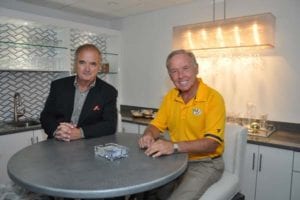 Hertz now has naming rights for the arena, the local magnate Hoffmann family has purchased the arena, as well as the team, and the Everblades have a new National Hockey League (NHL) affiliation with the Nashville Predators. Wow! There are plenty of moving parts coming together for this powerhouse hockey team.

Almost immediately after the contracts were signed, David Hoffmann was getting after physical improvements for Hertz Arena. He had crews working hard and fast to refurbish the suites on the upper level, and his team was engaging diligently to replace the roof in favor of a Category 5 hurricane shelter strength.

“This will be a very unique venue,” says the chairman of Hoffmann Commercial Real Estate, regarding the arena’s $10-$12 million renovation. “Lots of improvements will be seen by all who attend the games.” 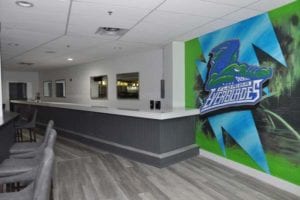 Fans can expect to be wowed by a new video scoreboard, a new sound system and renovations of the Breakaway Sports Pub and Hertz #1 Club. Outside, there will be noticeable landscaping enhancements.

Hoffmann adds that his company had been looking to purchase a professional sports team for about a decade, and the acquisition will be a fantastic diversification to the family’s assets, which include numerous holdings, both nationally and locally, including several properties on Naples 5th Avenue.

To Everblades General Manager Craig Brush, Hoffmann is like Santa Claus, fulfilling everything that’s been on his wish list. It makes him feel like an eight-year-old kid.

“Three major things have happened in the past year, and the fans will be treated to so much fun,” says Brush, whose excitement is beyond measure. 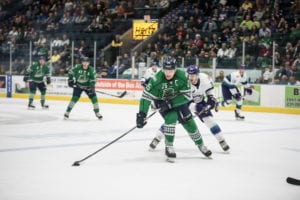 Eoghan Slye, vice president of marketing for the Hertz brand, echoes Brush’s enthusiasm as he explains why the company sought naming rights for the arena.

“We wanted to ensure we were aligned with the biggest sports brand in the area,” says Slye. In addition to being the home of Everblades Hockey, Hertz Arena also hosts many big-name entertainers throughout the year. “It’s our opportunity to positively impact the most people here.”

For Hoffmann, the purchase was not only smart business but also reflects a personal interest. He has four grandsons who play ice hockey, and he has always loved the sport. Improvements to the arena have been a massive undertaking, and Hoffmann expresses his zeal about everything new for the fans to enjoy. 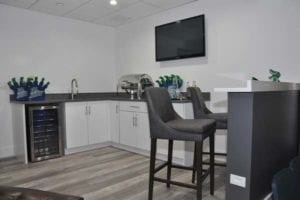 “The flooring is finished, we have new internal seating, new locker rooms and green rooms will elate all, a 25-foot statue of a hockey player will be on exhibit, and the new scoreboard and sound system are destined to be state-of-the-art,” he gushes. “I am very excited about it!”

And then there’s the affiliation with the Predators. Since the Everblades’ inception in 1998, the club has been connected to the Carolina Hurricanes, so a new NHL affiliation is a big change. Everyone is on board, says Brush, but the past won’t be forgotten.

“I give great thanks to our former owner, Peter Karmanos, Jr., and the 20 years of entertainment,” he says with sincerity. 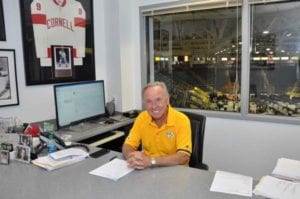 As it turns out, Brush has been a longtime friend of David Poile, the Predators general manager of 33 years. Poile has a home locally in Naples but hasn’t been able to get down here as often as he’d like. Now, he has an even better reason.

“We are incredibly excited to have the Florida Everblades as a developmental affiliate,” says Poile. “Led by Craig Brush, the Everblades have established themselves as one of the best franchises in the ECHL and have a proven track record of developing players. They’ve been a model of consistency in their league, and we look forward to seeing them take an active role in the success of the Nashville Predators.”

Interestingly, the Everblades and Predators were both founded in the same year. Nashville has become a strong force in the NHL’s Western Conference over the last five seasons, qualifying for the postseason in each of those campaigns. The Preds have now advanced to the postseason in 12 of the last 15 seasons. The influx of talent from Southwest Florida should help bolster the roster in Tennessee, as the Predators continue eyeing playoff berths.

Hoffmann, the eager Everblades owner, speaks to the local fan base: “We want to thank the fans for their 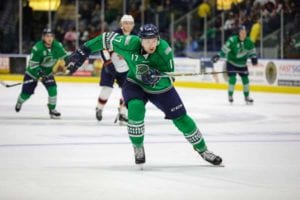 continued support. We don’t want to disappoint them. We want to make all the events a great experience.”

Considering the many exciting changes and additions, it should be easy to assume fans will have a tremendous time at Hertz Arena this season.