If you haven’t been to Bayfront in Naples lately, you’re in for some tasty surprises down at the bay. With revamped, remodeled restaurants on almost every corner, visionary builder and owner Kevin Stoneburner has created a destination for locals and tourists alike—eclectic mixes of fine and casual dining, galleries, shops, salons and luxury living spaces. Among the varied dining options in Old Naples, a trio of distinct cuisines awaits at Bayfront. K-Rico, Stoney’s Steakhouse and Southern Kitchen & Raw Bar each recently launched brand new menus featuring unique dishes to please the most discerning of patrons. 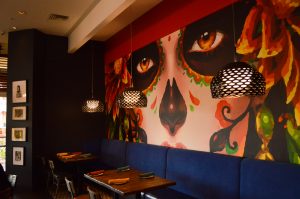 The breezy, indoor-outdoor bar serves freshly-squeezed juices, specialty cocktails—such as the signature Mamajuana margarita infused with CBD oil—sangrias, Mexican and American craft beers and more. A visually stunning 100-tequila room, lined with premium tequilas and mezcal, offers flight tastings for something above and beyond the ordinary.

“Every time I’m here, I order this salad. I add shrimp to it, and it’s so healthy with fresh jicama and kale, lightly tossed with olive oil,” says Golonka. “It’s fabulous.”

K-Rico is open for lunch and dinner, seven days a week, with happy hour daily from 3-5 p.m. The private dining room, lined with rows of wine bottles and boasting a gorgeous glimpse of the bay, seats up to 16 for corporate and other private events. 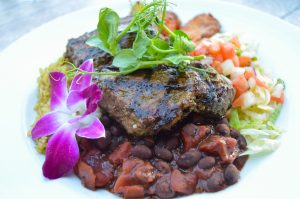 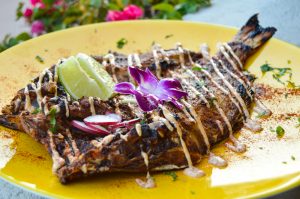 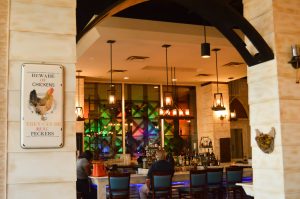 Formerly known as Southern Style Kitchen & Cocktails, this sprawling, 7,000–square–foot restaurant underwent some major remodeling during the pandemic. Stoneburner and his chefs also delivered on their endeavor for an upgraded, modern menu while retaining some of the classic southern comfort items, like fried green tomatoes and chicken–and-waffles, that made the place popular when it opened two years ago.

“At Southern Kitchen & Raw Bar, you’ll find more upscale southern cuisine, and we are more focused on plating and presentation,” says Golonka. “You can’t go wrong with anything on the menu.”

An eclectic and impressive brunch, including bottomless mimosas and bloody Marys, is served every Saturday and Sunday from 9 a.m. until 2 p.m., with delectable options like Raspberry French Toast or Bananas Foster Pancakes and savory southern specialties like the Chicken Hash Skillet or the Bayou Benedict, with organic poached eggs, crab and shrimp cake, and key lime hollandaise. Those seeking a healthier start to their day will be pleased with the vegetarian and gluten-sensitive dishes.

Southern Kitchen’s dinner menu contains quite a variety. There’s brick oven pizza made fresh in the masonry oven, soups, salads and handhelds. Then there’s the ocean fare like Stuffed Hog Fish and Seafood Gumbo, and of course, the Southern Raw Bar items of its namesake.

The bar serves up creative cocktails, along with bottled and tap beer, as well as an impressive but approachable wine list. You’ll find live music every Thursday through Sunday and an extended happy hour every day from 3–6 p.m. Southern Kitchen’s Thirsty Thursdays now feature Fuklehead Bourbon Distillery, with surprising, new cocktails featuring the popular bourbon brand. 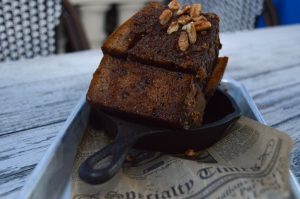 Served in a warm skillet, this divine southern comfort food is a must-have appetizer (or dessert, if you so choose). Drizzled with warm bourbon and praline sauce, the pecan-topped cornbread is a bountiful slice of heaven. 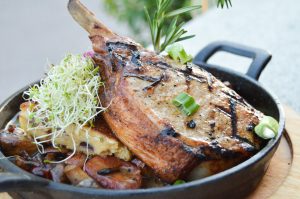 A cut above your traditional pork chop, this mouthwatering loin cut features bacon, mushrooms and a mustard glaze, served over pan-seared cranberry polenta cake and caramelized onion jus. It’s a hearty meal with a satisfying combination of sweet and savory flavors. 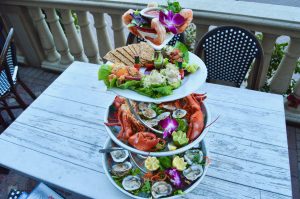 Southern Kitchen’s Seafood Tower is hardly an exaggeration—an ocean of raw and cooked offerings are delicately balanced on three platters, topped with a serving of jumbo shrimp cocktail. Raw oysters, clams, tuna and tuna poke are a feast unto themselves, paired alongside jumbo crab lump and Maine whole lobster. 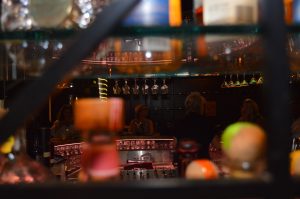 Walking into Stoney’s is like stepping into a modern view of an opulent steakhouse from a bygone era. The lusciously dark walls and furniture exude a warm, inviting atmosphere to enjoy a delicious meal and a glass (or bottle) of fine wine. The extensive art collection adorning the walls might look familiar, as all of the pieces were displayed in the former art gallery at Bayfront, which will be reopening in September along with an adjoining events venue yet to be named.

At the height of the pandemic, with restaurants barely operating, Stoneburner took the opportunity to completely remodel Stoney’s, which was known as K Prime for many years. A brand new kitchen was installed, as well as a dual-sided fireplace and new upholstery for the dining room booths.

Stoney’s features handcrafted cocktails and an award-winning wine list of modern wines and Old World favorites. With highly attentive staff and a private wine room accommodating up to 40 guests, Stoney’s is a prime location for events of all kinds, including weddings. For a more informal visit, happy hour is seven days a week from 4–6 p.m., with live entertainment every Thursday through Saturday from 6–9 p.m.

General Manager Mario Vitale has been in the entertainment and restaurant businesses since childhood. For years, he worked locally at DeRomo’s and continues to work with employees he is proud to call “family.” Stoney’s is among the favorite establishments of his entire career—a calling that almost didn’t happen, since he was semi-retired when he came on board. 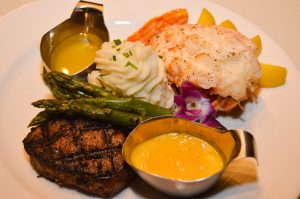 Often considered the benchmark of a fine steakhouse, Stoney’s Surf and Turf is an outstanding example. The petite filet mignon was perfectly medium rare, the butterflied lobster tail was everything you’d expect from a first-class steakhouse, along with the delicious grilled asparagus and mashed potatoes. 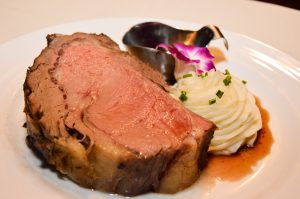 Simplicity can be a thing of beauty, as is the case with Stoney’s 16–ounce prime rib. Served with a choice of mashed potato, baked potato or mashed sweet potato, the ample cut was cooked to medium–rare perfection, with a side of au jus and horseradish sauce. This classic is also available in 10 ounces, as well as a 22–ounce King Cut.